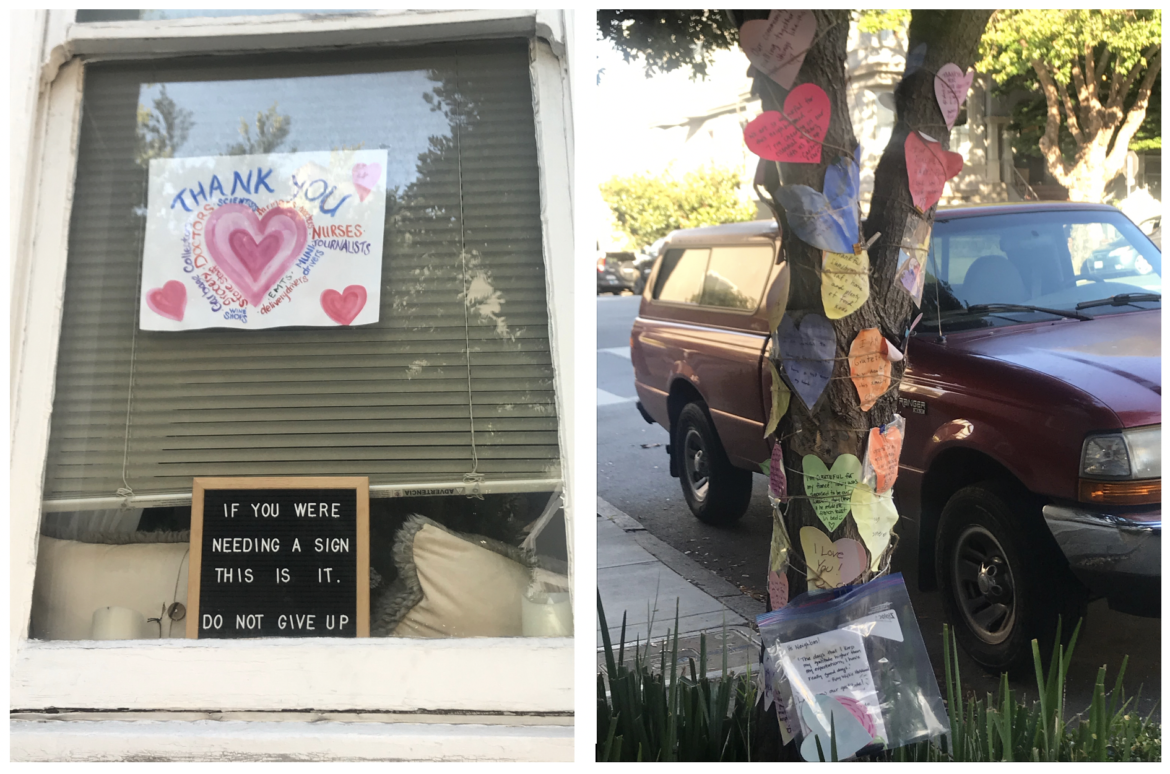 During the early days of the pandemic, San Francisco residents displayed signs expressing gratitude for essential workers and posted personal notes of appreciation on a tree near the corner of Vallejo and Gough streets.

A year ago, it seemed all of San Francisco was making one last trip to the store, as if preparing for a hurricane or blizzard. We were not yet wearing masks.

At the San Francisco Public Press, we had started transitioning to remote work two weeks prior, taking cues from tech companies that made early calls for employees to stay home.

We ran our first articles about the pandemic on March 11. Brian Howey had been reporting for weeks about the city confiscating homeless people’s belongings. As the novel coronavirus began to dominate national headlines, his reporting took a dramatic turn: “During Coronavirus Outbreak S.F. Will Continue to Seize Homeless People’s Property.”

By the time the mayor issued an emergency order calling for San Franciscans to begin sheltering in place on March 17, our news team had adapted to windowpane Zoom meetings. We congratulated ourselves for being so nimble. We had no idea then how challenging the coming year would be for us professionally and personally, and for the whole world.

Adrenaline drove us to publish at a pace we had not previously attempted; the Public Press was mostly known for long-form investigative projects. Our audio team, six months into producing the “Civic” podcast and broadcasting on KSFP, repurposed studio equipment to record interviews from kitchens and bedrooms using makeshift baffles for better acoustics.

Health care: While the federal government downplayed the crisis, Dr. Monica Bhargava, a pulmonary and critical care physician treating COVID-19 patients in Oakland, presciently told “Civic” that “this virus could have a significant presence in our health care system for anywhere from six months to a year.” Nurses sounded the alarm about workplace guidelines, saying they did not have the personal protective equipment they needed to do their jobs safely.

Education: Students in dorms at San Francisco State University said they were confused by conflicting messages: Should they shelter in place or go home to their families? The San Francisco Unified School District administrators closed schools for three weeks, not knowing classrooms would not open again for more than a year.

Homelessness: Guidance for people living on the street was contradictory and confusing. San Francisco officials advised homeless people to sleep one to a tent. Emergency handwashing stations were installed, with many soon found to be broken or missing. Some without housing sheltered in cars. The city began securing hotel rooms for some people sleeping in shelters or outside. Over the next year, officials debated whether to expand or wind down the hotel program, with some suggesting federal funding could be used to address challenges that predated the pandemic. As of mid-February, nearly 10% of the city’s permanent supportive housing units meant for homeless people sat vacant.

Mutual aid: With so much uncertainty, limited mobility and voracious appetite for news, readers and listeners returned to our reporting day after day, and our website traffic tripled. Many readers were drawn to stories about regular people taking action — building hand sanitizer mini-factories and mobilizing mutual aid societies to help their neighbors. Some delighted in reports that animal shelters had emptied as the newly homebound clamored to adopt dogs.

Racism: But too often, grim news eclipsed bright spots. Racism against Asian Americans emerged early in the pandemic with misplaced blame for the virus, which was first detected in Wuhan, China, but already spreading fast in Europe and the U.S. Community leaders worried the Trump administration was stoking xenophobia, and that attacks would get worse. Advocates reported that those attacks on Asian Americans have continued apace, totaling about 3,800 since the pandemic began.

Activism: In May, people flooded streets in cities nationwide to decry police brutality and demand policy change following the killing of George Floyd in Minneapolis. The movement gained momentum. Youth organizers led a protest that drew 10,000 people to San Francisco’s Mission District. Members of the Black Panther Party reflected on the echoes of their effort decades ago in the initiatives of Black Lives Matter.

Continuing storylines: As journalists in a small newsroom, our greatest contributions come from following a few topics intensely. We double down on local elections with our nonpartisan voter guide. We report on the vulnerability of homeless people living in tents, the looming threat of evictions, the military’s toxic environmental legacy and efforts to reduce the use of harmful chemicals in public spaces. Our “Civic” team plumbs history for context — asking what we can learn from the AIDS epidemic both in terms of studying viruses and social activism. And they continue to build on series about essential workers, vaccine distribution and reopening schools. Someday we will refer to the pandemic in past tense and shift our reporting to other matters. Many storylines that emerged long before COVID-19 will surely outlast it, similar to multi-year FBI corruption investigations like the one currently unfolding in San Francisco.

The pandemic is far from over. Most of us are still waiting for vaccines. But the Public Press will keep following important local stories as we roll past this anniversary.