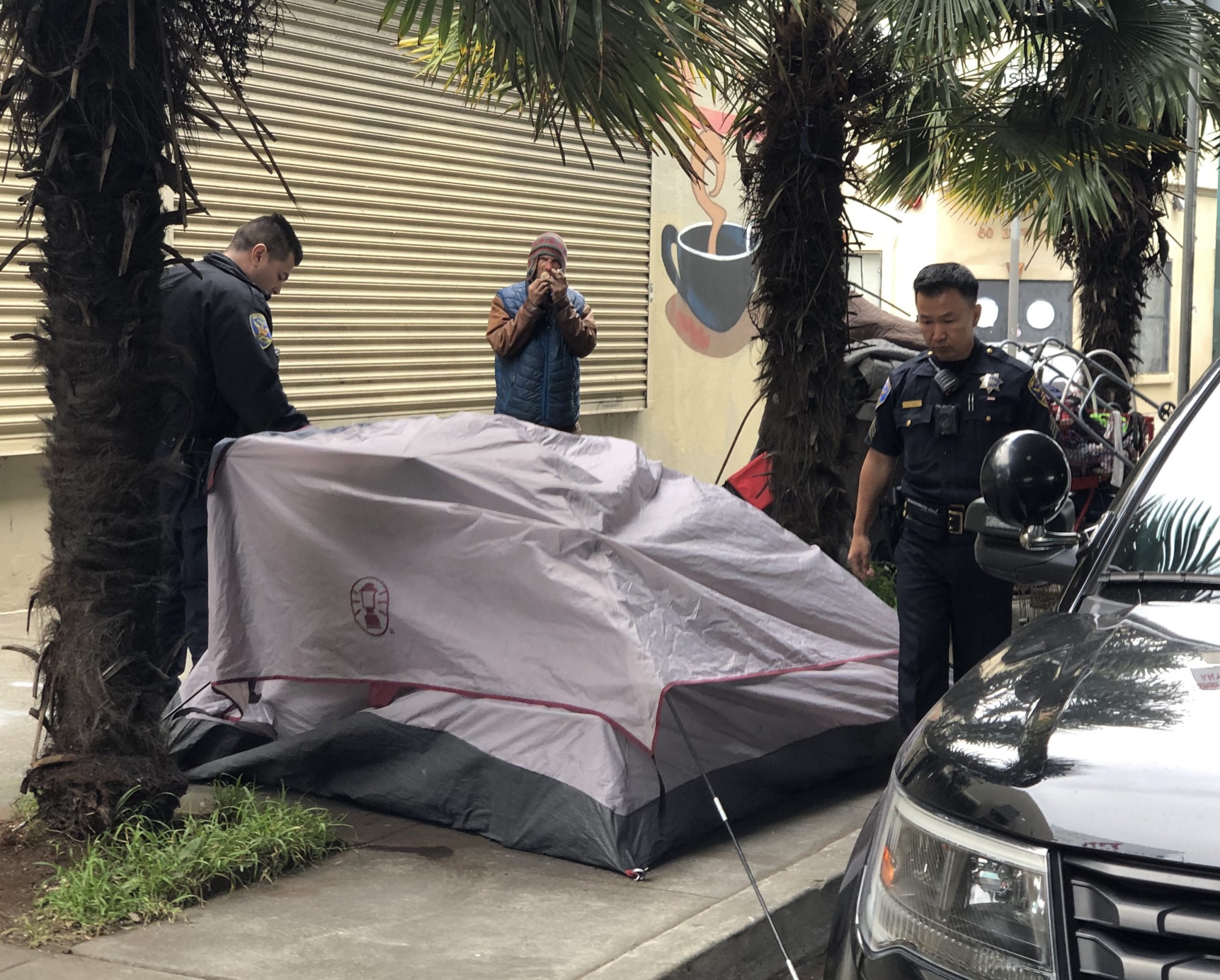 San Francisco has frequently changed its policy toward people living in homeless encampments in recent weeks. On March 5, officers disassembled a tent a man was living in on Division Street. Eleven days later, Mayor London Breed’s shelter-in-place order exempted the homeless, asking them to sleep one to a tent. Photo by Michael Stoll / Public Press.

Sam Lew, Reporter |
LikeTweet EmailPrint More
San Francisco announced an order Monday that requires residents to stay at home to prevent the spread of coronavirus. But for homeless San Franciscans, “shelter in place” may be next to impossible.

The health order exempts homeless San Franciscans, of whom more than 5,100 live unsheltered, but they are “strongly urged to obtain shelter.” However, San Francisco’s homeless response system has long been overburdened, even for resources like emergency shelter. As of March 16, the city’s shelter waitlist was 799 people — and may become even longer if shelters begin spacing beds apart to practice social distancing.

“They’re telling people to shelter in place when there is no shelter,” said Kelley Cutler, human rights organizer at the Coalition on Homelessness. “We haven’t heard anyone talking about what’s going to happen to people on the streets — only in shelters or SROs. We already have so many people dying on our streets, and the coronavirus is only going to increase that.”

The order also urges the government and other entities to “make such shelter available as soon as possible and to the maximum extent practicable.”

The Human Services Agency has been tasked with providing temporary housing for homeless San Franciscans — but this only applies to those who have tested positive for COVID-19 or must self-quarantine due to exposure. The agency estimates that there will be a need for 3,500 housing units for all populations, not just homeless, who will need alternative living situations to self-quarantine. So far, they have 400 to 450 units ready for use.

The units will likely come from smaller tourist hotels with 30 to 60 units that will allow health service providers to work onsite, said Human Services Agency Director Trent Rohrer, who added that 30 units would be activated immediately for use. Those 30 units will be for homeless individuals who are awaiting test results but do not need hospital beds.

It’s still unclear how and when San Francisco will expand shelter for those without the virus who haven’t been exposed or test positive for coronavirus.

“We are currently assessing if we have capacity to increase general shelter operations,” Rohrer said in a Monday evening press conference. “We have not finished that assessment or made that decision yet.”

Jeff Kositsky, who is stepping down as director of the city’s Department of Homelessness and Supportive Housing this month to coordinate street outreach programs, said the department is educating people who are unsheltered with information on COVID-19 and social distancing. “We are very focused on preparing for what happens if there is an outbreak in a congregate setting or in permanent supportive housing,” he said.

The city’s interagency coalition working to address street homelessness, the Healthy Streets Operation Center, has advised homeless San Franciscans to sleep at least six feet apart and with one to a tent.

Cutler said that the one-person-to-a-tent policy is challenging, given that the Department of Public Works has said that it will continue the policy of confiscating homeless people’s property on sidewalks and in homeless encampments, which has included tents and medication in the past.

Homeless activists have called for the city to place a moratorium on homeless sweeps, as has been done by San Jose Mayor Sam Liccardo, and to end the towing of vehicles that homeless people live in.

One of those demands may have been granted, at least in part. The San Francisco Municipal Transportation Agency announced Monday that it would suspend enforcement on a number of regulations, including towing cars parked for more than 72 hours, peak hour tow-away, and other towing not related to safety or access. Parking rules that still apply include those with “health and safety” implications, such as street cleaning, parking meters and driveway tows.

“For hundreds of people who live in their cars, these vehicles provide the quarantine and social distancing needed to stay healthy and safe,” said Tori Larson, an attorney at the Lawyer’s Committee for Civil Rights who works with homeless individuals whose cars have been towed. “When so many people’s homes are threatened by tows, this moratorium is incredibly important. We hope we can use this as leverage to continue protecting homeless San Franciscans in the future as well.”

Governor Gavin Newsom shared details of the state’s plans to house homeless individuals in hotels, motels, mobile homes and recreational vehicles Monday night. The state has identified 901 suitable hotels, he said; in Oakland, 393 rooms in two hotels have been secured for housing homeless people. He also announced the first death of a homeless person in the Santa Clara region.