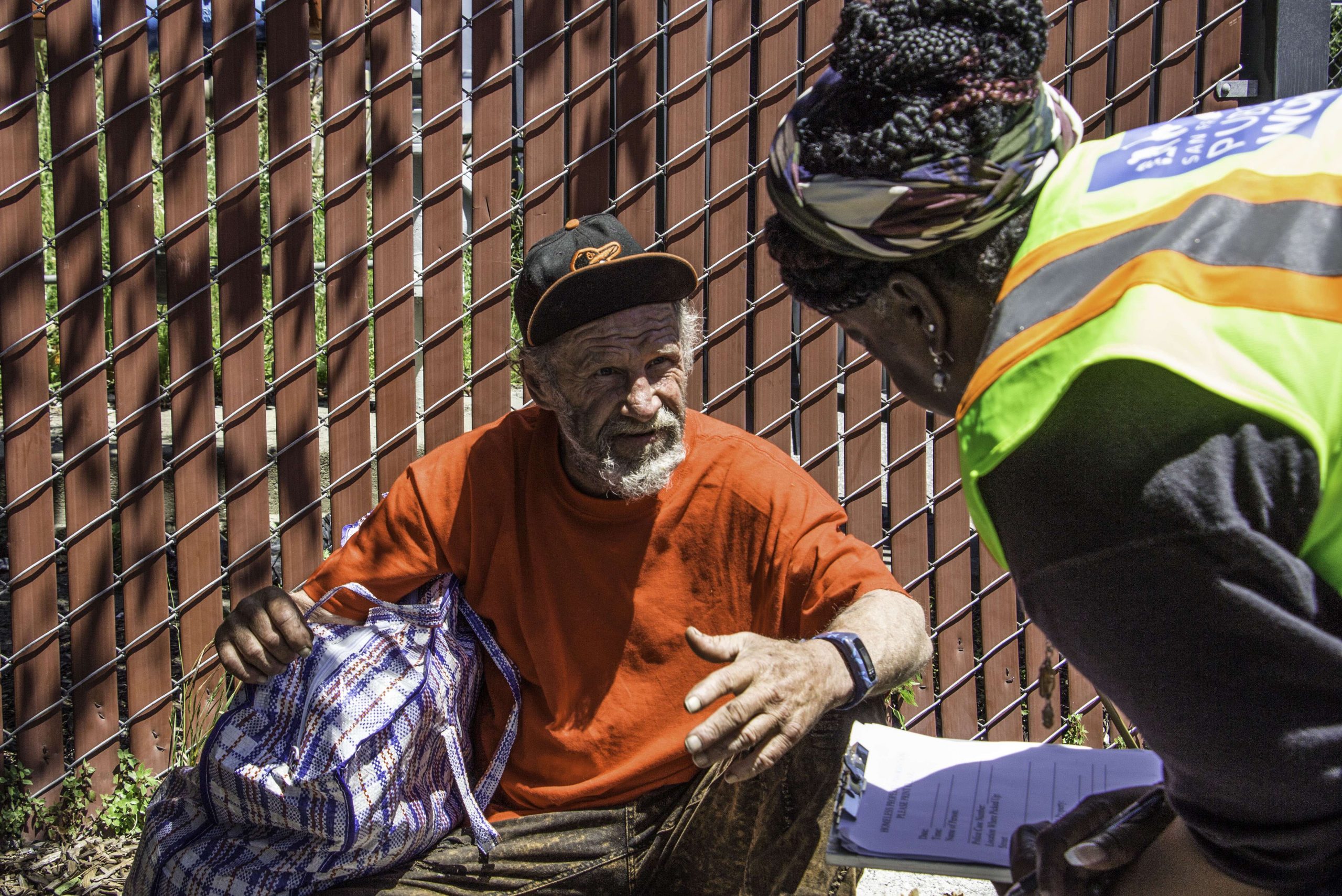 David Chaplin describes items he is trying to retrieve to a Public Works employee at the agency’s operations yard in August 2019. A Public Works representative said the agency would continue to confiscate unhoused people’s belongings during the coronavirus outbreak. Photo by Brian Howey / San Francisco Public Press.

(Updated at 8 p.m. to include additional comment from Department of Public Works Spokeswoman Rachel Gordon.)

San Francisco will continue to confiscate belongings from people living in street encampments during the coronavirus outbreak, a Department of Public Works representative said, despite warnings from doctors and activists that the seizures may leave homeless people more vulnerable to the disease.

Public Works spokeswoman Rachel Gordon said Wednesday that department employees will not change their standard procedure of impounding, recording and storing items found unattended at homeless encampments because “that’s what we do.”

Items confiscated during encampment visits will be stored for up to 90 days in plastic bags or bins, per department policy, she said. In light of the coronavirus outbreak, the bins will be disinfected after use, and staff will clean the item storage area four times each week. Before the outbreak, the storage area was cleaned monthly.

Local doctors have expressed concern that forcing unhoused people to relocate frequently and confiscating their clothes, sleeping bags and tents can leave those people vulnerable to infection.

“That means that you’re more at risk of not being fully prepared to be at your best, healthwise,” said Dr. David Ofman, chief medical officer at the San Francisco Community Clinic Consortium. “You may not have all the clothing you need. You may lose your jacket so you’ll get colder than you would’ve been.”

Dr. Margot Kushel, director of the UCSF Center for Vulnerable Populations at Zuckerberg San Francisco General Hospital, told the Mercury News that San Jose’s policy of suspending encampment removal in response to the outbreak “makes a lot of sense.”

People who lack stable housing are often more susceptible to getting sick due to underlying chronic illnesses, Ofman said, and they’re already “hard-pressed” to follow health agency guidelines during the outbreak, such as washing their hands.

Ofman said he was not in a position to say whether the changes to Public Works confiscation procedure would be sufficient in mitigating the spread of the virus among city workers or people who visit the storage facility to retrieve property, adding that the “more serious threat to a homeless person is they don’t get their possessions back.”

For several years, activists and unhoused people have accused Public Works employees of throwing away many of the items they confiscate.

When asked about concerns from Ofman and other doctors, Gordon said she would refer them to the department’s industrial hygienist to discuss department policies, but declined to comment on the public health implications of taking people’s possessions.

Kelley Cutler, an organizer with the Coalition on Homelessness, said the department’s announcement was “basically adding on top of the regular struggle” that unhoused people endure, “but during a time of crisis.”

Couper Orona, a former firefighter who is homeless and living in San Francisco, said she’s spent a week visiting homeless neighbors to keep them updated on coronavirus prevention. But the work has been frustrating. When homeless people get sick, she said, they’re unlikely to visit a doctor for fear of losing their things while they’re away.

“People are too busy worrying about their stuff being taken,” she said. “They’re not taking care of themselves.”

“It’s business as usual,” she said.

Since Mayor London Breed declared a state of emergency over the coronavirus Feb. 25, more than 400 encampments have been labeled “removed,” according to 311 records. According to the Controller’s Office, the word “removed” can be used to describe a variety of official responses, including cleanings, move-along orders and item confiscations by city agencies.

In February, city officials announced they would abandon their policy of responding to every encampment complaint made to 311, the city’s nonemergency complaint line, after a drastic decline in the number of connections between unhoused people and city services. The policy change followed criticism that the city was engaged in a whack-a-mole style approach to homelessness.

Department of Public Health spokeswoman Veronica Vien said the department was in the process of distributing hand sanitizer and installing hand washing stations at encampments, while outreach teams had begun informing encampment residents about where they should go if they felt ill.

“People experiencing homelessness are definitely one of our top priorities,” Vien said.

Update 8 p.m.: After this story was originally published, Gordon said the city needs to look at the issue more closely. “While it’s true that we are not prepared to immediately cease bag and tag operations, we will consider the concerns from public health experts and implications if the policy is changed.”

Listen to Brian Howey talk about his reporting on this issue on “Civic.”