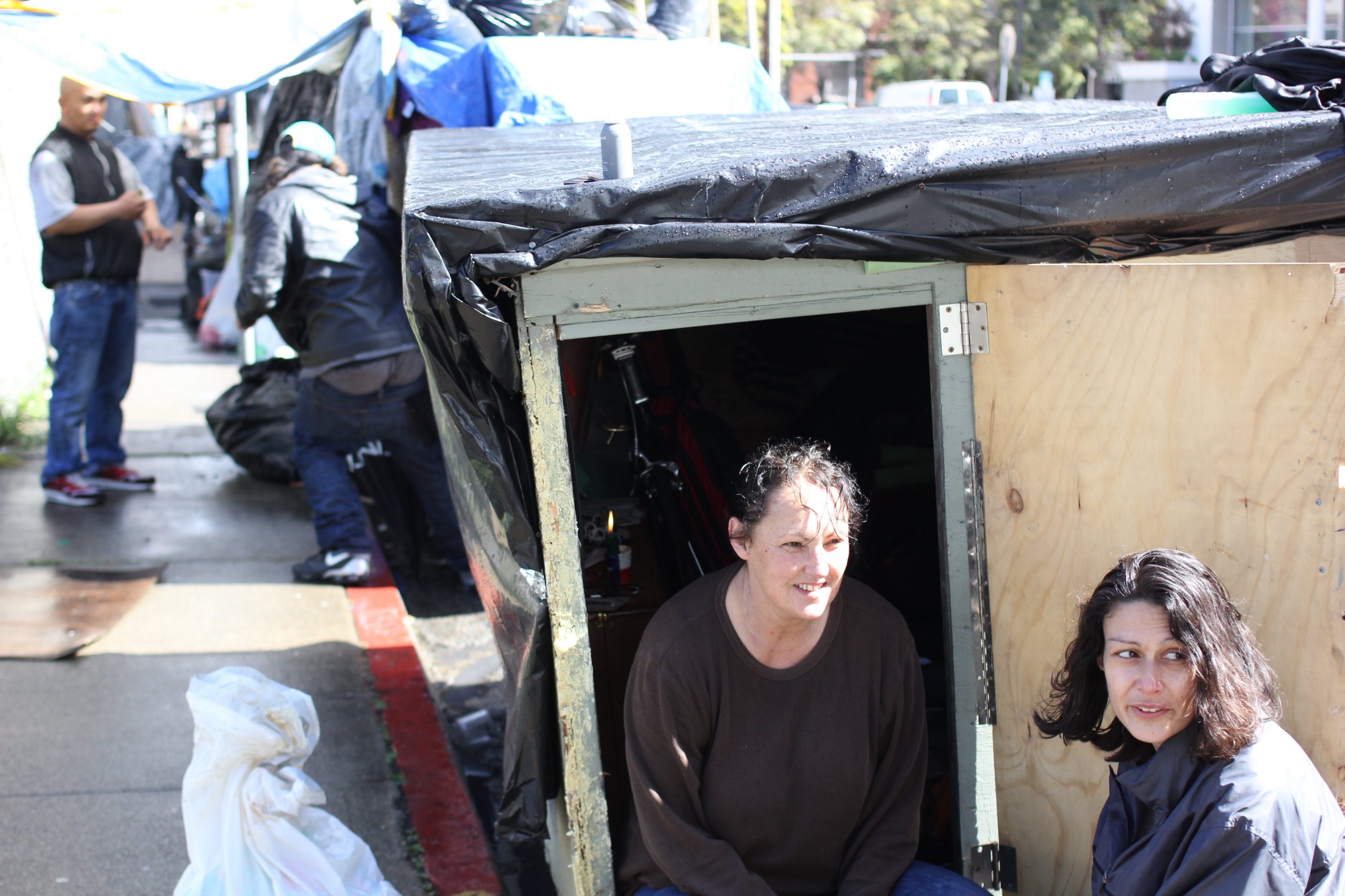 Occupants of a homeless encampment near the junction of U.S. 101 and Interstate 80, in 2017. Photo by Noah Arroyo // Public Press

In an effort to limit the spread of the coronavirus among the homeless, city officials are encouraging people on the streets to sleep only one to a tent and to keep at least six feet between tents.

San Francisco’s Department of Homelessness and Supportive Housing on Saturday announced changes to city policy in an effort to slow the spread of the coronavirus.

Jeff Kositsky, director of San Francisco’s Department of Homelessness and Supportive Housing, on Saturday said in a statement that the Healthy Streets Operations Center, a coalition of city agencies tasked with abating homelessness, will divert resources toward mitigating the effects of the viral pandemic in street encampments. Kositsky, who was previously set to transition to leading Healthy Streets this coming week, will now lead the city’s homeless outreach initiatives through the city’s Emergency Operations Center.

“Our focus will be encouraging homeless residents to follow best public health practices, such as maintaining at least six feet of distance between existing tents with no more than one person per tent, and utilizing available public sanitation services,” Kositsky said.

The announcement represents a further departure from previous policies, indicating that city departments, including Public Works, the homelessness department and the police, would significantly scale back enforcement based on complaints to 311, the city’s nonemergency public service line.

“We will of course continue to enforce the law in cases of illegal activity, but our focus right now is reducing the spread of coronavirus in our community,” he said. In February, the city announced that it would stop relying primarily on 311 complaints to drive its response to homelessness, which was the city’s strategy from August 2018 until early this month. According to previous reporting, 2019 saw a decline in the number of homeless people accepting referrals for services and an increase in tents in public spaces citywide — an overall reversal of progress the prior year.

Kelley Cutler, an organizer for the Coalition on Homelessness, said Kositsky’s statement lacked clarity. “It’s so vague,” she said. “Other resources are shutting down, so it would be helpful if they were more specific with that.”

Cutler noted that Kositsky’s statement did not address whether the city planned to stop removing encampments, confiscating items from unhoused people living outside or issuing move-along orders.

As recently as Wednesday, Public Works spokeswoman Rachel Gordon said the agency would continue to confiscate homeless people’s belongings during the coronavirus outbreak, though it was tweaking policies to better clean facilities where the items are stored. Kositsky’s statement did not specify whether those confiscation policies were changing once more.

Representatives from Public Works and the communications office of Mayor London Breed were not immediately available for comment.

The Homeless Outreach Team, a group of social workers coordinated by the homelessness department, will provide information and resources to unhoused people during the pandemic, Kositsky said.

“One hundred percent of the Homeless Outreach Team are focused on COVID-19,” he said in a phone interview before the announcement, adding that most of the homelessness department’s other resources had already been deployed to lessen the effects of the coronavirus on the homeless community.

The city has secured quarantine facilities for people who lack housing and thus cannot self-quarantine. City agencies have acquired 30 recreational vehicles, positioned at several sites around the city, for those who have tested positive for the coronavirus but do not need to be hospitalized.

“If there’s a need for more, the city’s prepared to get more of them,” said Victor Lim, of San Francisco’s Department of Emergency Management. The city has also secured several hotel rooms for quarantining the homeless, but Lim said he was not sure how many would be available.

Due to health privacy laws, Department of Public Health spokeswoman Veronica Vien could not say whether anyone living in homeless encampment had been tested for coronavirus.

This is a developing story. It will be updated when more information becomes available.

Listen to Brian Howey talk about his reporting on this issue on “Civic:”