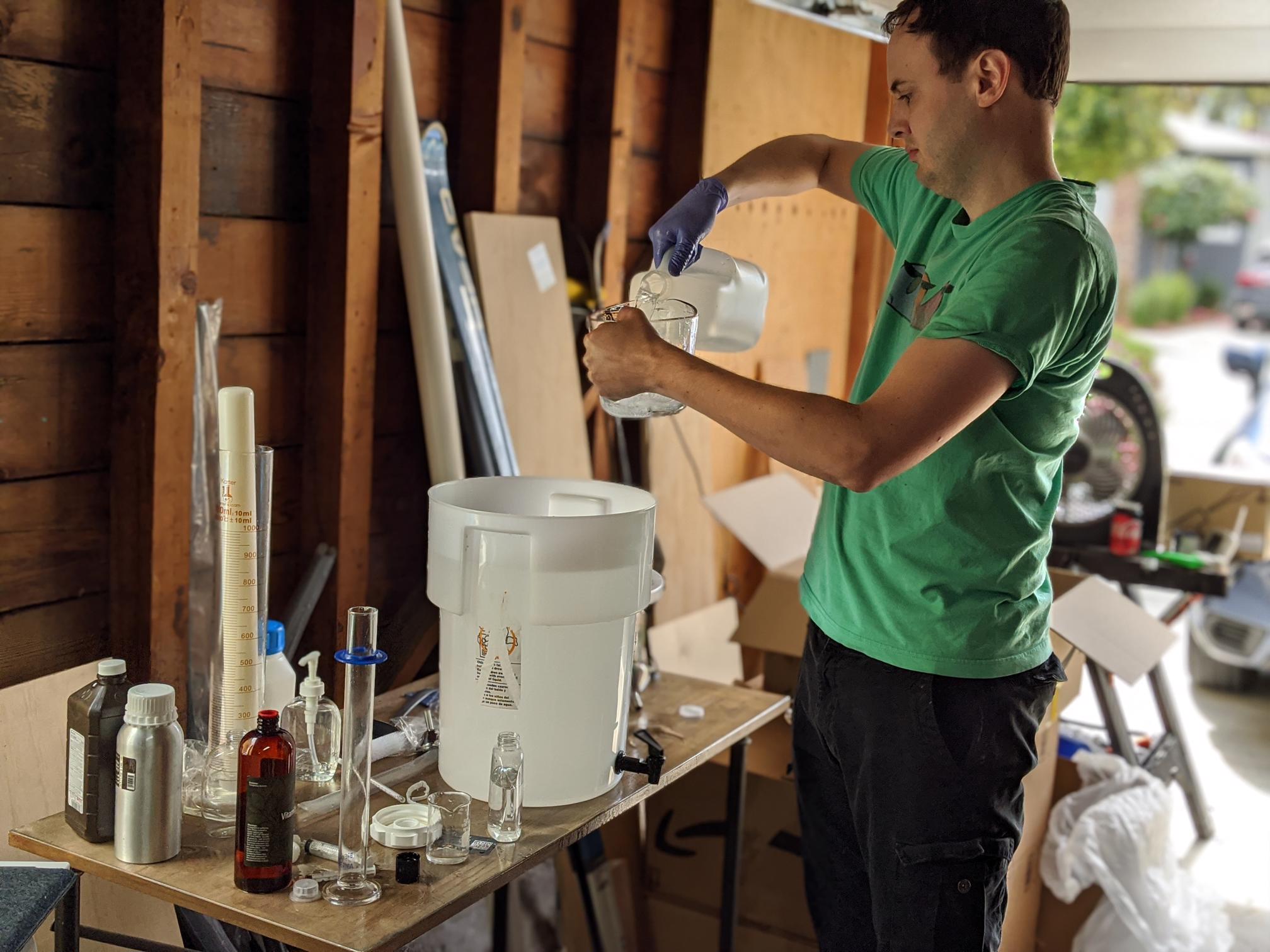 Murph Finnicum’s San Mateo garage looks like a scientist’s underground laboratory might. There are gallons of isopropyl alcohol, floors sticky with glycerin, shelves scattered with half-filled beakers and cylinders of mysterious mixtures.

In the midst of the COVID-19 crisis, Finnicum’s home has transformed into a makeshift hand-sanitizer workshop that has produced 400 eight-ounce bottles of the liquid gold to donate to community groups around the Bay Area — with plans to fill up 700 more.

“It started out as a joke, but then I thought, ‘I could really do this,’” said Finnicum, after seeing that hand sanitizer was sold out both online and in stores a few weeks ago. “If someone uses it and doesn’t get sick, you’re saving lives, you’re reducing the spread of the disease.”

Finnicum isn’t the only one making the DIY hand sanitizer. A group of local scientists produced and dispatched 38 gallons to organizations in the Bay Area over the weekend. In Oakland, a collective of five disabled, queer activists of color is doing the same in a home kitchen.

There is incredible need for the scarce commodity. “I’ve heard shelters need them, outreach workers need them, people in encampments need them,” said Brian Edwards, an organizer with the Coalition on Homelessness.

This is particularly true due to the lack of bathrooms and hand washing stations that are often homeless residents’ only means of sanitation. “In lieu of that, you need hand sanitizer,” Edwards said. “It’s not ideal, but you’ve gotta work with what you’ve got.”

Finnicum discovered a recipe published by the World Health Organization and set off to make the hand sanitizer himself. However, obtaining some of the ingredients proved to be challenging. When the 33-year-old Twitter software engineer couldn’t find any small amounts of isopropyl alcohol, he knew he’d be making enough to share. Sixty-eight gallons of hand sanitizer, to be exact.

“I found a hydroponic supply company and bought a 55-gallon drum of alcohol for $400,” he said. The massive delivery of industrial-grade alcohol typically used to clean off plant residue was brought to his house by a freight truck on a wooden pallet. Then he went out to purchase other ingredients: vegetable glycerin, hydrogen peroxide and, to “make it a little nicer,” lavender and Vitamin E.

Most of Finnicum’s hand sanitizer production happens at night, after he puts his 2-year-old daughter to bed. Over the past week, Finnicum has tested multiple batches of the formula to figure out what’s working best and what isn’t. One key factor, he said, is ensuring the mixture contains at least 60 percent alcohol for it to work as a cleansing agent, a threshold that the Centers for Disease Control and Prevention recommends. Finnicum tests each batch so that there’s a minimum of 75 percent alcohol — “just in case,” he said.

The cost to make each bottle comes out to $1.09. The most expensive part, Finnicum admits, are the bottles themselves, at 65 cents each. Production and packaging is fast. About 100 of the eight-ounce bottles can be filled through a spigot from a five-gallon drink dispenser in under an hour. The bottles, which Finnicum’s wife helps label, have a simple sticker that lists the ingredients and a message from the Centers for Disease Control and Prevention that “soap and water is more effective.”

With the shortage of sanitation supplies during the COVID-19 outbreak, community-based organizations have already begun reaching out to Finnicum after he called for groups he could donate to in a Twitter post on Saturday. Two of them, the Coalition on Homelessness and Simply the Basics, are based in San Francisco and serve low-income and homeless communities. Another batch was dropped off in Oakland for homeless encampment residents there.

Members of the East Bay’s Disability Justice Culture Club, which first began as a response to the devastating impact last year’s PG&E power shut-offs had on elderly and disabled residents, have been making batches of hand sanitizer in the East Oakland home three of the five members share.

The group has made more than 300 kits for homeless encampment residents and elderly and disabled people who are unable to access hand sanitizer, said club member Jay Salazar. Along with hand sanitizer, the kits include gloves, N-95 masks, Vitamin C drinks and information about how to stay safe.

“People ask for a hundred of them because they want to give them out to friends and family or even strangers,” Salazar said. “We know there’s always going to be a need — and sometimes, it’s hard to ask for what you need.”

Hand sanitizer is just a small part of the Disability Justice Culture Club’s multi-layered operation to support disabled, elderly, low-income and homeless East Bay residents during the pandemic. The group, whose efforts support about 50 elderly and disabled people, has also created a network to provide community emergency assistance by matching what people can give with what people need.

“We’re realizing how much this is needed and how big this can be,” Salazar said.

The need exists in every Bay Area city. In Berkeley, a collective of volunteers is installing hand sanitizer dispensers around the city to help prevent COVID-19 from spreading among homeless residents.

“The city’s wash stations have been pointless,” said the clinic’s outreach coordinator, Fritz Bixler, noting that they are often unmaintained and without water or soap. “It’s pretty astounding how cities have completely turned their backs on residents.”

In total, the Berkeley Free Clinic has distributed 11 hand sanitizer dispensers around the city and passed out smaller bottles of the sanitizer to 16 encampments.

The hand sanitizer dispensers come from the clinic itself. As a volunteer-run clinic without the gear or training to respond to COVID-19, the community health organization decided to close down until April 2. With its doors shuttered, members wanted to put the hand sanitizer to good use.

Alongside homeless residents, the group has also developed a DIY hand washing prototype and raised more than $7,000 to fund the handwashing stations in hopes of providing homeless residents access to basic hygiene facilities.