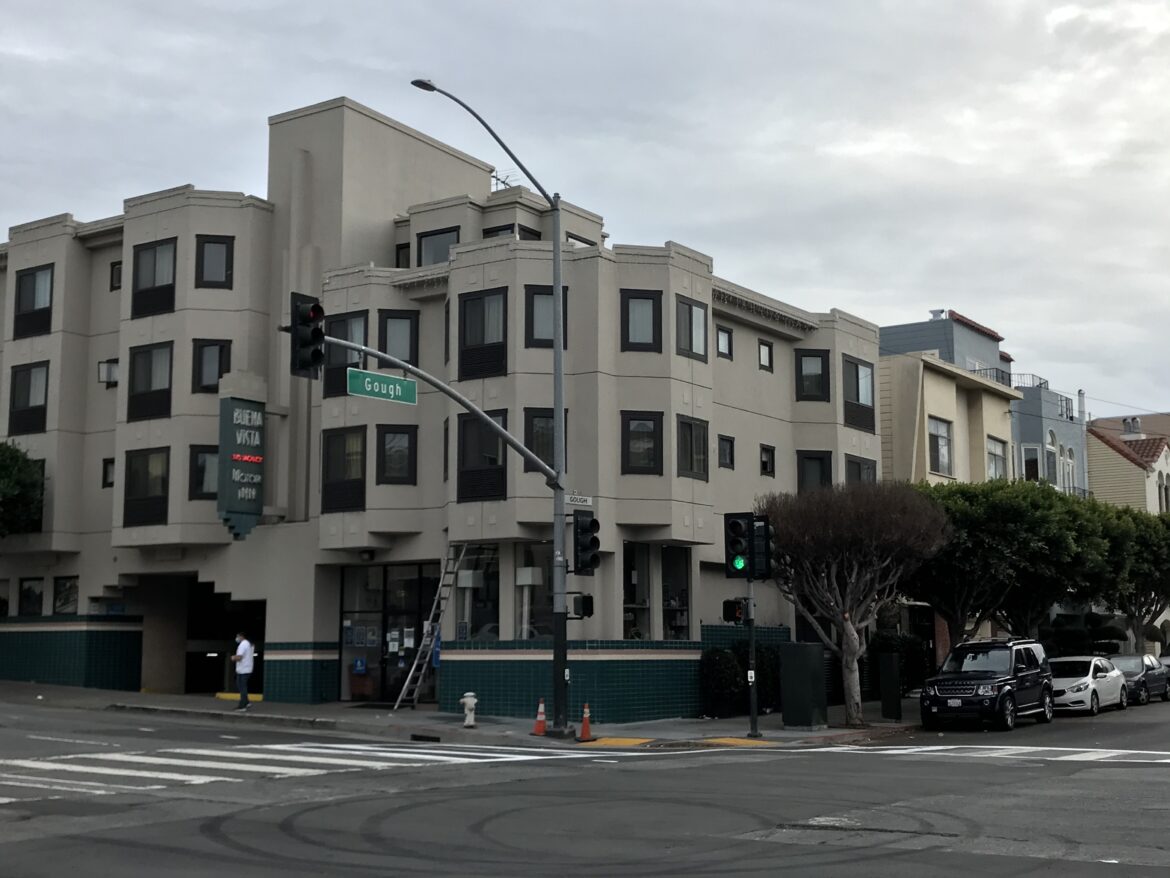 During the pandemic, San Francisco has housed about 2,200 homeless residents in shelter-in-place hotels, including the Buena Vista Inn at Lombard and Gough streets.

Some city supervisors are pushing to continue using hotel rooms occupied by vulnerable homeless residents during the pandemic for a second cohort after current room residents are moved into other housing. Proponents say that despite a possible loss of federal emergency funds, discontinuing the program too soon would leave thousands unsheltered during the health emergency.

The Board of Supervisors’ Budget and Finance committee on Wednesday passed an emergency ordinance to expand the shelter-in-place hotel program and sent it to the full board for a vote Dec. 15.

But the argument over whether the hotels’ use should be expanded may divide the board. The ordinance needs a two-thirds majority, meaning approval from at least eight of the 11 supervisors, to pass without risk of being vetoed by Mayor London Breed. Right now, five supervisors solidly support the legislation: Matt Haney, Hillary Ronen, Shamann Walton, Dean Preston and Sandra Lee Fewer.

“The humanitarian disaster that we face is the fact that there are still thousands of people on the street during a pandemic, as it worsens, as it gets cold, without safe and adequate housing,” said Haney, who authored the legislation, while speaking during the hearing.

The measure would prohibit the city from closing the shelter-in-place hotels until the Federal Emergency Management Agency officially terminates its Public Assistance Program, which provides the bulk of the funding. Walton, Preston and Ronen signed on as cosponsors.

About 2,200 people reside in 29 shelter-in-place hotels. They were selected out of more than 8,000 people living on San Francisco streets because they fit the federal Centers for Disease Control and Prevention’s guidelines for those at severe risk of developing complications if they contract COVID-19. This includes people over 65 and those with pre-existing conditions, such as asthma or heart problems.

The city plans to wind down the hotel program in 2021, with the first hotels slated to close by April and the last by October.

Under the emergency ordinance, the city would continue its plan to transfer people out of the hotels into housing. But rather than closing hotels once they are emptied, new people from the street would be moved into vacant rooms. Even if the population of residents shifts to include people who are not at high risk of COVID-19 complications, the hotels may still qualify for funding under FEMA’s budget plan, as they fit the requirement of providing alternatives to congregate shelters.

“The shelter-in-place hotels are the smartest, most direct, most cost-effective solution, short of immediately making housing options more available, which we will do, but we acknowledge takes time,” Haney said.

Not everyone supports this position. Abigail Stewart-Kahn, director of the homelessness department, said staffers at her agency have their hands full finding housing for the current hotel residents. If the city places more people in the hotels, there won’t be any housing available to send them to when FEMA ends its funding, she said.

“I’m very concerned at the end of this that we’ll reach a cliff with 2,000-plus folks with nowhere for them to go and 30 days to rehouse them, which I can tell you is not possible,” she said. “We will have used all of the housing options we have.”

Budget committee chair Sandra Fewer said that was a risk she was willing to take. “What supervisors have to be able to say is that ‘if we are unable to house everyone when the FEMA money runs out, we may have to exit people to the street,’” she said. “It is going to be a hard pill to swallow. But they could possibly have shelter for nine months.”

Supervisor Rafael Mandelman opposes the measure. He cast the lone dissenting vote of the three members of the Budget and Finance Committee. He wrote in a Facebook post Thursday that he does not believe a plan that could result in people being sent from hotel rooms back to living on the street is worthwhile.

“The end of FEMA reimbursement is not a hypothetical; it is a certainty — it will happen, and it will likely happen in the coming year,” he wrote. “So the question is where do we want to be when that happens?”

“My fear is that without a plan, the city will end up in the very position we all want to avoid, forced to choose between exiting hotel residents to the street or diverting local homelessness funds away from more cost-effective housing investments that provide permanent exits from homelessness to continue the hotels program,” he added. “If the Board of Supervisors is going to seize the wheel away from HSH, we need to be clear where we are driving.”

In a text message Thursday, Haney expressed confidence that the legislation would pass the Board of Supervisors next week, though he was not sure whether he would have the two-thirds vote he needs to provide a veto-proof majority.

The Public Press reached out to several supervisors Thursday evening about the legislation. Supervisor Aaron Peskin said that he was undecided.

“I am definitely grappling with all of the issues, and taking it extremely seriously and have not come to a conclusion,” he said. “The real issue here is how long is the FEMA money going to hang on? Do we have a real implementable plan for getting out of the hotel business and into the supportive housing business?”

If the legislation does not secure a two-thirds majority, it is possible that Breed, who has expressed support for the hotel wind-down plan, will veto Haney’s legislation.