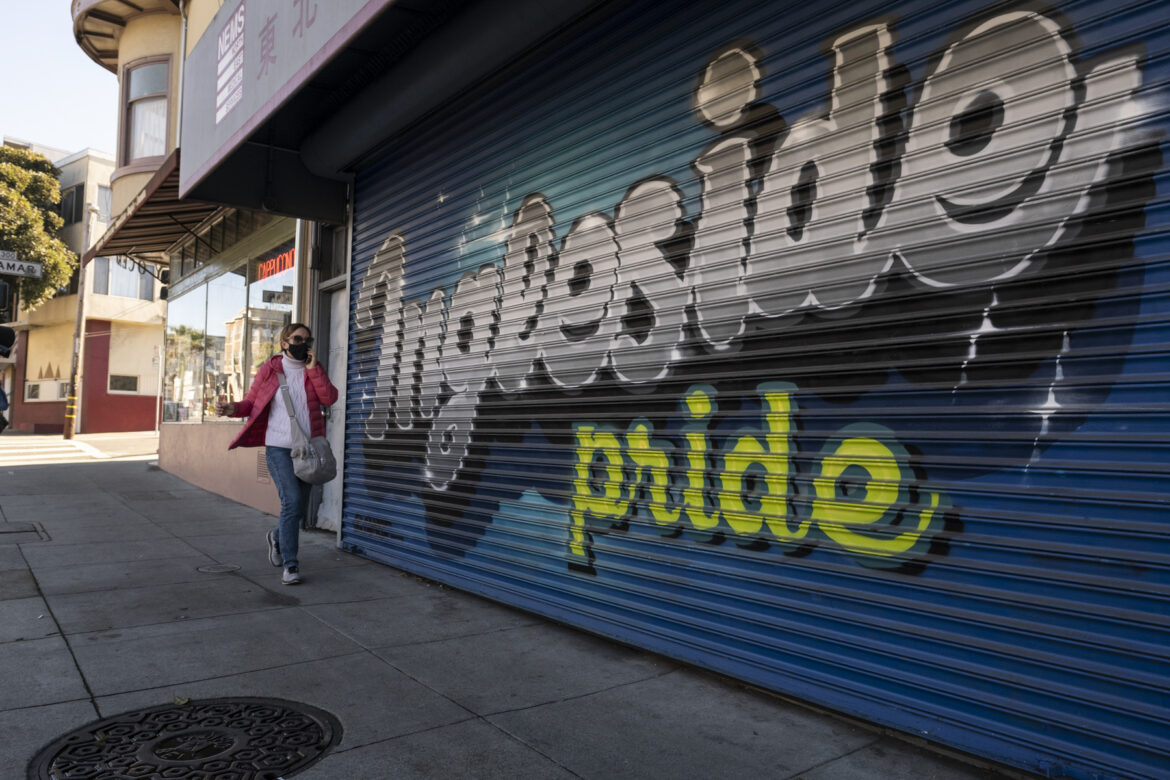 A woman chats on her phone, wearing a mask, while walking down Ocean Avenue in early January. She strolls pass a mural highlighting, “Ingleside Pride,” painted on a closed medical business. Residents in the neighborhoods of Ingleside, Excelsior, Mission and the Tenderloin are struggling to continue paying rent. Despite the region’s high rents, the percentage of San Francisco area residents who are behind on their rent is lower than the national average.

When 2020 began, Oziel had two jobs and health insurance. Weekdays, he worked as an account manager for a wine distributor. Weekends, he worked as a server and sommelier.

But in March, when the COVID-19 pandemic hit, Oziel lost both of his jobs. Since then, he has struggled to pay rent on the apartment he shares with his wife and 2-year-old son in San Francisco’s Ingleside District.

“It’s kind of hard to find a job if you have a restaurant and wine background,” he said.  “These are the businesses that have been impacted.” Oziel, who is 43, didn’t want his full name published. He has sought legal counsel, concerned his landlord would evict him.

As the pandemic stretches into its second year, an estimated 278,000 households, or roughly one-quarter of the Bay Area’s 1.1 million renters, have little or no confidence they will be able to make next month’s rent, according to a San Francisco Public Press analysis of Census Bureau data. An estimated 60,000 renters living in Alameda, Contra Costa, Marin, San Mateo and San Francisco counties who were behind on their rent in mid-December said they feared eviction in the next 60 days.

Tenants and their advocates are bracing for the worst.

“Tenants are in a really precarious situation,” said San Francisco Supervisor Dean Preston. “Nobody knows what’s going to happen after the protections expire.”

Despite the region’s high costs, the percentage of San Francisco-area residents who are behind on their rent and worried about eviction is lower than the national average. More than half of the country’s 10.1 million delinquent renters said they fear eviction soon; in the Bay Area, about one-third of the region’s 170,000 delinquent renters are concerned about losing their homes.

The Census Bureau’s Household Pulse Survey does not capture the racial disparities among area renters because of small sample sizes. But nationally, among residents who are behind on their rent, the data indicate that Black people, senior citizens and residents of larger households are among the most likely groups to report fearing eviction by March.

San Francisco housing advocates say people of color and low-income renters, as well as those who are limited English speakers, are at higher risk for eviction.

The eviction of even a small percentage of the households at risk of losing their homes would create an unprecedented number of homeless people in an area that has been in an affordable housing crisis for years. Moreover, the financial fallout of the pandemic could leave many lower-income tenants struggling to pay their rent well into the future.

Before the pandemic, Oziel and his wife had begun setting aside money for their son’s college education and were starting to look for a bigger apartment.

But when Oziel was laid off, he had to use his son’s college savings, along with his unemployment benefits, to help pay the rent through the spring and summer.

In September, when the state’s eviction moratorium took effect, Oziel began paying 25% of his rent. Under the new law, people who lost income or became ill as a result of COVID-19 could pay a quarter of the rent they owed until Jan. 31.

Tenants like Oziel are also worried about mounting rent debt. He owes nearly $4,000 in back rent, and while existing moratoriums have delayed those payments, the bills are coming due soon.

Under state law, landlords can start evicting tenants for nonpayment of rent beginning Feb. 1. And beginning March 1, they can sue tenants for rent owed from the start of September to the end of January.

San Francisco tenants cannot be evicted for rent owed between March 1 and Sept. 30, 2020, but landlords can take them to court to recoup that money, too.

The amount of rent owed is ballooning, as the pandemic surges and unemployment remains high.

According to a report from the San Francisco Board of Supervisors Budget and Legislative Analyst, more than 33,000 renter households in the city could owe a combined $196.2 million in overdue rent for April to September alone.

Statewide, nearly 240,000 renter households owe $1.67 billion in rent debt through December, according to a recent estimate from the Federal Reserve Bank of Philadelphia.

The pandemic relief package that Congress passed last month provides $2.6 billion in rental assistance for low-income Californians, but that money will not cover all of the debt that is owed.

“Not much that I can do”

Since October, Oziel has been working at the wine distributor on commission, not on salary. With the pandemic surging and indoor dining shut down again, his income is drying up, and he doesn’t know whether he will be able to pay the rent he owes when the moratorium expires.

He is grateful for the work, but it’s far from the steady income he had before the pandemic hit. He took out loans to pay his December and January rent in full. Housing advocates say many vulnerable tenants are relying on loans or help from friends and family, in addition to their unemployment benefits to pay the rent.

Oziel has been looking for a second job — like the one he had working as a server in a restaurant — to pay the bills. He’d rather borrow now than owe his landlord more later.

“It’s my first priority right now, finding another job and just keeping my family afloat,” he said. “There is not much that I can do.”

For now, Oziel works from his kitchen, while his wife cares for their son in the living room. The family goes on walks through the neighborhood to get out of their small, one-bedroom apartment.

“Not all of us have a backyard, or a place that you can chill,” Oziel said. “Imagine having a kid and just being inside a house all the time.”

Having a family has made managing the financial strain much more difficult.

“If it was just by myself, I don’t care, you know, I would move somewhere, with friends or somebody,” he said. “But I have a family.”

Frank Bass is a Pulitzer Prize-winning investigative reporter whose career has focused on the intersection of government, politics and business. He is a pioneer in data-driven investigations, with almost three decades of multimedia experience and innovation at top journalism organizations, including the Wall Street Journal, Associated Press, Bloomberg News and Al Jazeera International. Bass has lectured extensively on four continents and is the author of three books about using data for journalism.