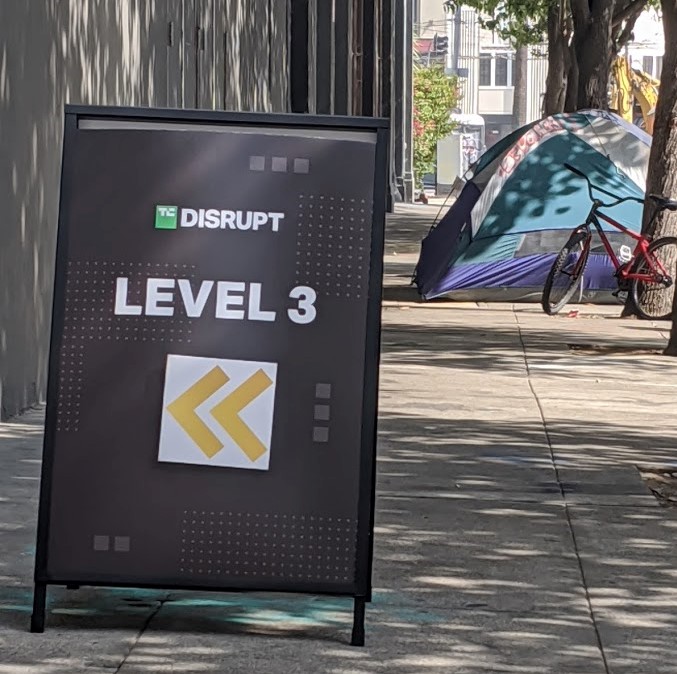 Several homeless residents have returned to the block their belongings were cleared from last week, ahead of Tech Crunch's Disrupt conference.

Non Plus Ultra, a company providing event space for TechCrunch’s Disrupt, an influential trade show for technology startups that began yesterday and typically draws thousands of attendees, conducted an independent sweep of a homeless tent encampment outside one of its San Francisco locations last week.

The incident, which was not sanctioned by the city, occurred early on Thursday, Sept. 10, behind a former Honda dealership on Market Street that has been converted into a Non Plus Ultra event space. The middle-of-the-night sweep displaced eight people, according to a nearby shelter resident who was friends with many of the camp residents.

A crew disposed of everyone’s belongings, taking them away in unmarked trucks. The sweep was observed by San Francisco Police Department officers, who did not attempt to prevent the sweep, according to several witnesses at the scene. Police confirmed that officers were sent to the scene, but said they did not talk to anyone, and no incident report was made.

“TechCrunch did not take part in or request” the sweep, said Editor in Chief Matthew Panzarino in an emailed statement noting that the company took the matter “very seriously.” He added, “We were not consulted on or informed of this action, which we would never condone.”

San Francisco’s practice of sweeping tent encampments ceased in March, when the city’s Healthy Streets Operation Team announced it would pause the seizure of tents and belongings due to the pandemic. As a result, the community that grew along 12th Street had been there for months.

“I’ve been here since March 18 in this very frigging spot,” said Jeffery McLemore, one of the residents whose belongings were seized. “They took everything. They didn’t leave not one thing.”

Tori Larson of the Lawyers Committee for Civil Rights, who is investigating the case, called the sweep “blatantly illegal.”

“You have a right to your belongings,” Larson said. “It is complicated by the fact that it was a private party, but it was a crime. You cannot take people’s stuff. There can certainly be charges pressed against the company.”

Non Plus Ultra signed a lease on the old car dealership and converted it into an event space in 2018, christening it SVN West. This week, the site is being used to host TechCrunch’s Disrupt conference, which features a “Startup Battlefield” where new companies compete for a $100,000 prize. Although Disrupt will be screened virtually, the event space is being used as a filming stage for the event. Tickets to Disrupt range from $75 to $545.

The sweep was conducted because the tents were abandoned, blocking the sidewalk at the rear of the building, and constituted a “serious health, safety, and fire hazard,” Non Plus Ultra said in an email to the San Francisco Public Press.

A few days before the sweep, Jonathan Huerta, a resident of the Civic Center Navigation Center, located across the street from the SVN West, witnessed Peter Glikshtern, a partner at Non Plus Ultra, approach the group to give them a warning that they would have to move. Huerta said the camp residents agreed, but asked that he go through the city, in the hope that they’d be connected to services or given hotel vouchers. They began to clean up the camp in preparation for the city coming by, getting rid of extraneous stuff and retaining only what was valuable.

They weren’t prepared for the middle-of-the-night sweep by a private company. When asked why the job was conducted after midnight, Glikshtern said. “It was just the easiest, most convenient time to do it.”

During the sweep, people lost everything. Huerta said the tents contained money from stimulus and unemployment checks, survival gear and personal items. One man lost a jacket his father had given him. Another, a sentimental notebook. Another, an urn containing his father’s ashes. Huerta lost materials he’d been storing at the camp to fix his truck.

“They all had masks on, and a whole bully effect,” Huerta said of the crew. “They walked up to tents, opened them, and started taking people’s stuff.”

McLemore said he lost two violins that belonged to his daughter, a trumpet, a moped, high-end auto parts and $11,000 in jobless benefit money that he’d kept out of the bank due to distrust of financial institutions.

Huerta said the encampment residents were frantic, trying to reclaim their belongings. Both McLemore and Huerta said Glikshtern started fighting with one of the residents during the sweep, and had him in a chokehold.

“There was a fight and I got hit in the head with a pipe, which wasn’t fun,” Glikshtern said. He didn’t expand on the comment about the chokehold.

Someone called police for assistance. “Officers arrived on scene and did not observe a fight nor did any person flag the officers down for any disturbance or other incident,” said San Francisco Police Department spokesman Robert Rueca. “There was no party that spoke to the police who arrived on scene.”

Huerta and McLemore said that’s not the case. They both said officers pulled Glikshtern aside when police showed up. Glikshtern confirmed he was searched, saying a false call had been made stating he had a gun. All told, he said, police showed up three times during the operation.

After the police failed to find a gun on Glikshtern, they let him go. “The next thing I know [the police officers] are walking with him, knocking on tents telling everyone they have to leave,” Huerta said. “Within 30 minutes, everything was gone.”

Two Facebook Live videos of the event posted at 12:14 a.m. corroborated many of Huerta and McLemore’s statements. In them, workers can be seen filling two unmarked trucks with mattresses, tents, bicycles and bags.

One truck left the scene. The second drove into the back of SVN West with people’s belongings inside. In the final minutes of Bortolussi’s second Facebook live video, Glikshtern can be seen high-fiving the workers after the job was done.

“It was trash, so it was taken to the dump,” Glikshtern said when asked where the items were taken.

Non Plus Ultra has defended the sweep, saying, “The tents were only removed after reaching out to DPW over 50 times, SFPD non-emergency a number of times.” In addition to health and safety concerns, the company said they needed to power wash the sidewalks and paint over graffiti, per city requirements.

A search of data from 311, the city’s all-purpose hotline, turned up a handful of complaints about the encampment over the last several months. The city did respond to some of those. Although sweeps paused during the pandemic, crews from Public Works are still being deployed to encampments to clean around the tents.

On July 11, a complaint over the encampment was resolved with the note “status is case transferred – area was cleaned around the encampment; referred to the police dept.”

Two reports of graffiti on Non Plus Ultra’s building at 10 South Van Ness Ave. — one on Aug. 21, and a second on Sept. 2 — were marked resolved by the city, with the note “During the shelter-in-place, Graffiti Inspection Requests on Private Property are not considered an essential function. As a result, we will defer this inspection until the shelter-in-place has been lifted.”

The aftermath of the Non Plus Ultra sweep, Huerta said, has been incredibly hard on those who lost everything. “When you live on the street and you don’t have anything, and someone comes in and steals all your stuff and then just laughs at you about it, it puts them in a spot that’s worse than they were in before,” he said. He lost property in the sweep as well, including car repair parts he was storing there with friends.

He’s filed a police report over the theft of his items.

The Lawyers’ Committee for Civil Rights is investigating the incident. Larson said they may each be entitled to $25,000 compensation under California’s Tom Bane Civil Rights Act, which can be deployed when someone’s legal rights are denied through “threats, intimidation or coercion.”

“It’s so egregious to do this under the cover of night,” Larson said. “The facts could not be more heartbreaking and disturbing. This is vigilante injustice.”