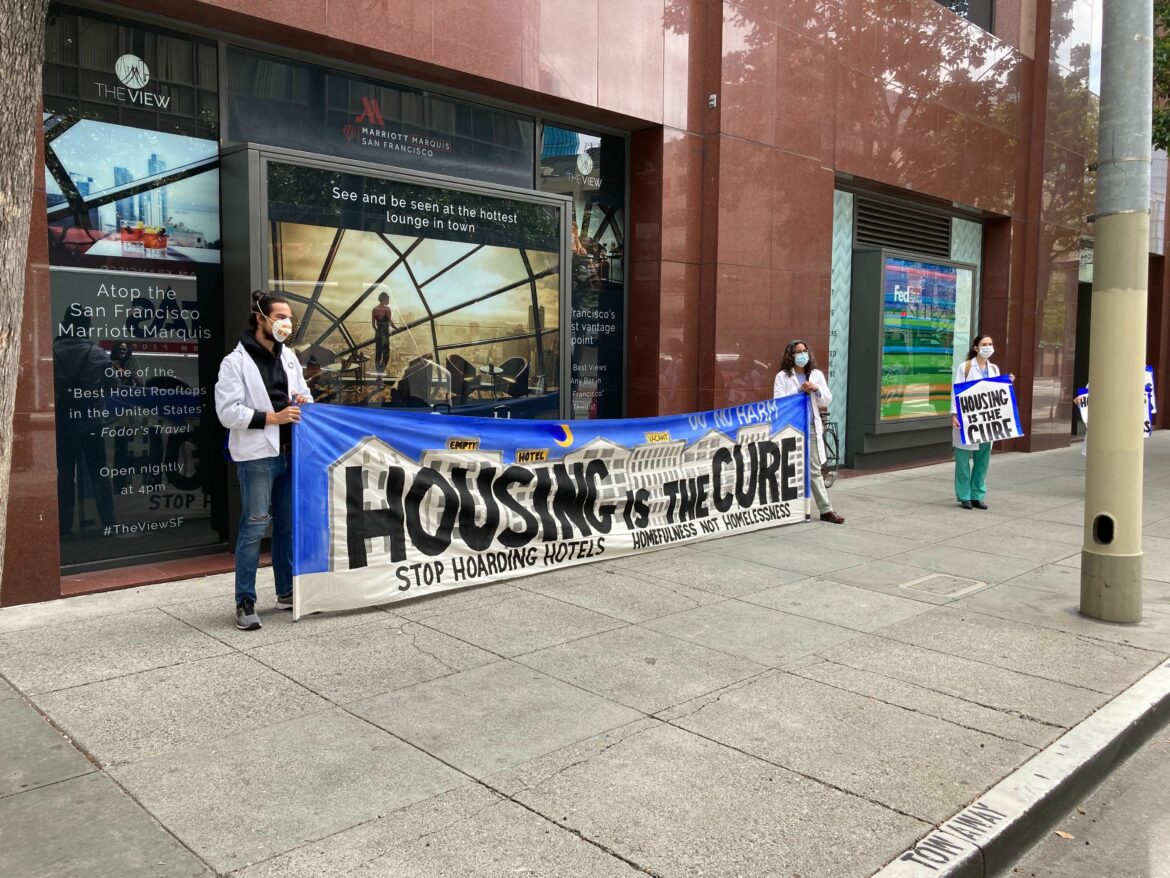 Protesters from POOR magazine, a publication and activist organization, attempted to occupy the Marriott Marquis hotel in downtown San Francisco in May to demand the city house more homeless residents in the thousands of hotel rooms left vacant during the coronavirus pandemic. City supervisors voted to expand the hotel room shelter program this week.

The city will house more people in hotel rooms than it had planned thanks to a law the Board of Supervisors passed unanimously Tuesday.

The legislation, drafted by Supervisor Matt Haney, establishes an emergency ordinance that requires the city to continue its practice of housing homeless people in hotel rooms while COVID-19 remains a risk. Emergency ordinances are used to rapidly respond to crises such as pandemics, and last 60 days.

It is a slimmed down version of a bill that had met opposition in a committee. Haney and his co-sponsors — Supervisors Hillary Ronen, Dean Preston, and Shamann Walton — amended the legislation  to secure the eight votes it needed to pass – two more than a non-emergency ordinance would require. That threshold also makes the legislation veto-proof.

Approximately 2,200 homeless people live in city-funded hotel rooms across the city. Under the legislation, new occupants would be moved in from the streets as current hotel residents are transitioned into housing. The Budget and Finance committee passed the legislation last week, with Supervisors Walton and Sandra Lee Fewer in favor and Supervisor Rafael Mandelman against.

Getting all 11 supervisors on board was a last-minute effort.

“Over the last week, it did become clear that we did not have the supermajority that was required to pass this legislation as it was written,” Haney said during the meeting. “We worked closely with departments, Mandelman and homeless service providers on a number of amendments to address cost specifically, which is where most of the concerns were.”

The bill now sets a limit on how many hotel rooms will be made available to those living on the street once existing residents move out.

Under the original legislation, one resident would move out, and another person from the street would be moved into their hotel room. That raised concerns from Mandelman that when emergency COVID-19 funding from the Federal Emergency Management Agency ran out, there would be more than 2,000 people in hotel rooms with no housing awaiting them, forcing the city to send them back to the streets.

While the limited exit housing wasn’t directly addressed, the number likely to be affected by that issue was reduced. Now, for every 10 people that move out of hotel rooms, six rooms will be made available to incoming residents. For the first round of hotel closures, slated for early 2021, 567 rooms will be vacated, and 340 subsequently filled with new residents.

In addition, the legislation doesn’t mandate that new residents occupy the just-vacated rooms. This allows the city to potentially consolidate residents into a smaller number of shelter-in-place hotels, negotiate new contracts with service providers operating the hotels, and free up rooms for those isolating or quarantining with COVID-19.

Finally, the legislation was amended to specify that the commitment the city made to house its existing hotel residents after they exit from shelter-in-place hotels need not apply to new residents. That would enable the city to send people back to the street when the program ends.

“I suggested to Supervisor Haney that we not go right up until the moment the FEMA funding is cut off, with 2,000 folks in the hotel rooms in the fall of 2021,” Mandelman said, before voting for the amended legislation. “Unless we’re going to take that on as a locally funded program, we need to gradually downsize.”

The emergency ordinance goes into effect as soon as Mayor London Breed signs off on it, which must happen within 10 days. The ordinance lasts 60 days, at which point it can be extended. In the meantime, people are beginning to move out of hotels into permanent supportive housing, creating vacancies that can now be filled.