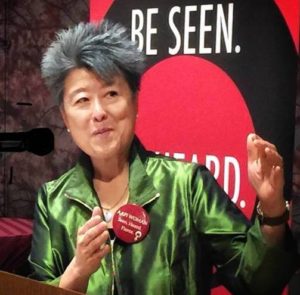 Author and activist Helen Zia sounded an early alarm that as the coronavirus spread, attacks against Asian Americans could get worse. Courtesy Helen Zia

“Listen Up!” she wrote to her nationwide followers on social media.

“I lived through the auto industry’s collapse and the climate of misery and hate,” she continued, alluding to attacks on Asian Americans in the 1980s, and warning that this time things could be worse. That was a decade when anti-Asian sentiment rose as Japan overtook the United States as the world’s largest automaker and Japanese investors poured billions of dollars into iconic U.S. properties such as New York’s Rockefeller Center. Anyone who looked Japanese was a target.

“When the powder keg of racism blew,” Zia recalled in her social media post, “Chinese American Vincent Chin was beaten to death for ‘looking Japanese.’ With this pandemic, people are losing livelihoods AND lives. The misguided outrage is bound to explode.”

Activists expect incidents of hate, discrimination and even life-threatening violence to escalate after shelter-in-place orders are lifted, and they’re already organizing against that possibility.

To prepare for this surge, “we need an equivalent system-wide response like the public health and government responses to COVID-19,” said Cynthia Choi, co-executive director of Chinese for Affirmative Action.

Since the coronavirus began spreading in the U.S., Asian Americans – the fastest-growing population group in the country – have once again become the targets of a rising tide of xenophobia. Negative attitudes are increasing, and Americans are becoming more resentful of Asians and China as the pandemic spreads.

A national tool launched in mid-March to monitor incidents of anti-Asian-American and Pacific Islander (AAPI) hate and hostility shows how prescient Zia was. Within a month, Stop AAPI Hate received almost 1,500 reports of hate incidents. Forty-two percent came from within California and 94 were from San Francisco.

That incidents were so high even in the Bay Area, which contains six of the 10 U.S. cities with the highest concentrations of Asians, suggests that even people who may have previously felt safe from racial discrimination are now more likely to encounter harassment, refusals of service and other outright, even more perilous acts of racism.

“We are perpetual foreigners,” said Zia.

Political demonization has likely contributed to rising racial antipathy. Anti-Asian attacks spiked across the country after President Trump and top Republicans began repeating the terms “China virus,” “Chinese virus” and “Wuhan virus.” Asian Americans have been chased out of stores, coughed on, beaten up, sprayed with sanitizers, barred from restaurants and more, according to reports filed with Stop AAPI Hate.

Two Asian American children and their father were stabbed in a Texas mall. A Brooklyn woman had acid thrown in her face as she was taking out her garbage. Those are just some of the most horrifying attacks reported to Stop AAPI Hate. The majority of incidents targeted non-Chinese Asians, the site said. Asian Americans are now more afraid of being attacked than of getting sick, according to advocates.

A joint intelligence bulletin issued April 7 found that white supremacists are using this crisis to advance their agenda. “Racially or ethnically motivated violent extremists who advocate for the superiority of the white race seek to exploit the COVID-19 pandemic to bolster their narratives and encourage attacks and hate crimes against minorities, including Jewish and Asian Americans,” said the internal document authored by the Department of Justice, the National Counterterrorism Center and the Department of Homeland Security, according to a report from Yahoo News.

These groups believe Trump is on their side. Soon after his inauguration, former Ku Klux Klan leader David Duke tweeted, “Everything I’ve been talking about for decades is coming true and the ideas I’ve fought for have won.”

As the first coronavirus cases showed up in the United States, these groups were promoting race-based political strategies that Republicans have adopted.

In a March 17 letter, they implored the President to investigate China’s role in allegedly hiding the coronavirus’ origins and in spreading the virus beyond its borders. Posted by the Southern Poverty Law Center, the letter was signed by what the center described as a “litany of conservative groups and figures, including members of hate and antigovernment groups.”

Although Trump stopped using Asian names for the virus and even said Asian Americans were not to blame for it, attacks continued. He then escalated his rhetoric by taking exactly the tack hate groups and other conservatives had urged: blaming China for allegedly covering up its role in spreading the virus.

The share of Americans with negative perceptions of Asians rose to 14% in March from just 10% at the beginning of 2020, according to a Nationscape survey report sponsored by the Democracy Fund and UCLA. This attitude change marks a reversal of trends between 1992 and 2016, when the share of Americans who felt positive about Asians grew from 59 to 68 percent, according to the Nationscape report.

From the Chinese Exclusion Act of 1882 to “Yellow Peril” hysteria in the early 1900s to World War II Japanese internment to 1980s violence, the nation’s long history of demonizing Asian Americans has sparked both fear and commitment to organizing against hate.

“The political goal of the rhetoric of racism is the removal and incarceration of people of color,” said Don Tamaki, managing partner at the San Francisco law firm of Minami Tamaki LLC, at a recent virtual town hall sponsored by the American Bar Association.

“This is all part of the white nationalists’ play book,” said Helen Zia. “In their chat rooms, these hate groups talk about creating chaos, division, fear. That’s how they are most able to disrupt our democracy.”

Just as white nationalists are using social media to organize and grow their numbers, social justice and civil rights organizations are following suit. In March, alarmed by the sudden rise of anti-Asian attacks, 3,000 activists participated in a virtual town hall to discuss forming a national multiracial coalition that would develop common organizing strategies and appropriate responses to protect their communities.

“The pandemic is forcing us to coalesce and really look at what we need to do to address white racists,” said Choi of Chinese for Affirmative Action. “We’re very conscious that as thousands more die and the economy gets worse, there will be more reasons to attack Asian Americans, and those attacks will continue long after a vaccine arrives because of anti-China policies.”

In San Francisco, the first step was taken with Stop AAPI Hate, founded by Chinese for Affirmative Action with the Asian Pacific Policy & Planning Council and San Francisco State University Asian American Studies Department. The site’s purpose is to document the number and pattern of racist incidents and use the data in determining advocacy and policy responses at the local, state and national levels, said Choi.

For example, the data collected by the web site and other sources will help the state’s Asian American Pacific Islander Legislative Caucus push for stronger anti-hate policies than currently exist.

“The data is critical … as we develop policy solutions and evaluate future budgetary investments,” Assemblyman David Chiu, who chairs the caucus, said in an email. “The pervasiveness of hate incidents is clear and will require multiple agencies working together to protect against discrimination and bias and promote safety and accountability.”

However, the reports received still don’t reflect all the incidents that actually occur, said Choi. Because of cultural aversions to, or negative experiences with, law enforcement and other government agencies, Asian Americans underreport attacks even to community organizations. Choi and other advocates are working with city agencies to create community-based outreach programs to address this reluctance as well as provide some form of justice for victims, whether through restorative justice or criminal prosecution.

Boudin’s reputation for practicing restorative justice offers some relief to those who don’t want to go through the criminal justice system but do want accountability. “The first thing I wanted to do was get the message out [to Asian Americans] that we’re here for you,” Boudin said in an interview. “You don’t have to suffer alone. There are services available to you.”

Similarly, the San Francisco Mayor’s Office of Street Violence Intervention Program is working with advocates to prevent and de-escalate racially motivated violence against Asians in the city. Scattered incidents of anti-Asian violence by members of other ethnic groups have occurred, said James Caldwell, director of the program. “The mayor won’t tolerate any of that and is very proactive in preventing more violence.”

“Leadership has to start at the top. This is a statewide crisis. It’s government’s responsibility to ensure the safety of its people,” said Russell Jeung, chair of the Asian American Studies Department at San Francisco State University. ”We shouldn’t have to guarantee our own safety.”

Linda Jue is editor at large for the Washington, D.C.-based investigative reporting website 100Reporters. She is also a reporting and writing coach for grantees of the Fund for Investigative Journalism. She lives in San Francisco.