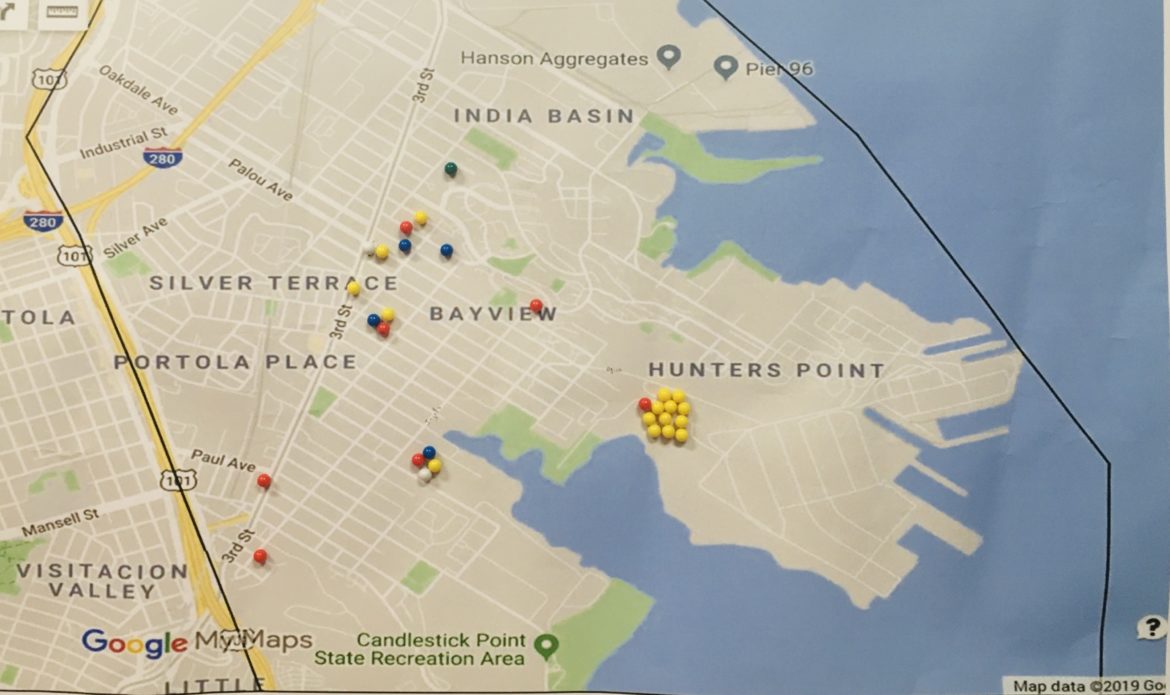 San Francisco’s Bayview-Hunters Point neighborhood has been hit especially hard by COVID-19, and residents sheltering in place in the area have for years faced elevated levels of air pollution from a variety of nearby sources. Recently, advocates have raised concerns about potentially toxic dust they fear is being generated by a nearby construction project.

The Hunters Point Naval Shipyard, an abandoned naval base along San Francisco’s southeastern waterfront, has been turned into a construction site where an ambitious mixed-use housing development has long been underway. A new neighborhood complex has already been completed and residents have lived there for years. For more than a decade, the site has also been subject to ongoing environmental remediation because the soil there remains contaminated with a slew of toxic chemicals from its days as a naval base.

In June, residents of the Hunters Point neighborhood who live up the hill from the base captured video of soil being disturbed at the shipyard, just down the hill from where residents have been sheltering in place. The video, shared with the Public Press by attorney Charles Bonner, who is representing Bayview residents in a lawsuit related to the cleanup of the shipyard, is shot through the fence looking onto the shipyard and shows an excavator in operation.

“As part of those earth-moving activities, dust is being generated, and it’s being generated at a time when air pollution has been linked globally to poor outcomes from the COVID pandemic,” said  Dr. Ahimsa Porter Sumchai, a community advocate and Stanford-trained medical doctor who has long worked to highlight environmental justice issues in Bayview.

Until recently, much of the construction work at the base had been shut down in the wake of a scandal involving a U.S. Navy contractor, TetraTech. The company was caught falsifying data about radiation levels in shipyard soil. While TetraTech was not involved in testing the specific parcel where neighbors observed construction-related activity, that parcel has not been extensively tested and questions remain about how safe the site is.

“There’s no justification whatsoever for going forward on … outdoor construction activity, especially in a region like this that is so isolated and is at the center of so many sensitive receptors in the community,” Sumchai said.

Beginning in 2019, Sumchai spearheaded a community health biomonitoring survey to determine whether Bayview residents would test positive for exposure to toxic materials. Test samples came back to reveal that some area residents have elevated levels of arsenic and other harmful elements.

“From the beginning, we were seeing two elements surface in the screenings, almost universally. One of them is manganese. The other one is a rare element, called vanadium. Both of them are chemicals of concern in the shipyard soil,” she said.

Arsenic and a rare radionuclide called gadolinium have also appeared in test subjects’ sample results, Sumchai said, adding that the survey has identified a cluster of nine people living in the Bayview-Hunters Point area who each have at least three of the elements in elevated concentrations. In one study participant, all four elements are present.

The survey findings don’t offer enough data to provide conclusive evidence that toxic elements in the surrounding environment, such as at the shipyard, are directly linked to health problems, but they provide key information that Sumchai said calls for more research. Even before the pandemic, residents had long complained of health problems, often respiratory ones. For advocates there, the construction activity is just the latest development in a years-long saga of environmental and health disparities.

Sabrina Hall, who has lived in the neighborhood for all her 39 years, has asthma and chronic bronchitis. Her son uses a nebulizer and her 21-year-old daughter has had high blood pressure since she was 17.

Longtime Bayview resident Leaotis Martin, who also attended the June press event, said his family has experienced several losses due to health conditions. He said he lost three family members: His twin brother suffered from an enlarged heart, his father had high blood pressure and his oldest brother went into a diabetic coma.

“Our whole thing is that we want to be healthy, just as healthy as the people on Nob Hill, and that’s why we fight this fight,” Martin said. “And we actually fight this fight for the people to do their damn job, because they get paid a lot of money, to watch over health first and human lives first. But they’re not doing it.”

A spokesperson for FivePoint, the housing developer at the shipyard that was spun off from homebuilder Lennar Corp., said there is no construction work happening at the site, but that FivePoint had formed a task force to work with regulators to ensure greater safety and compliance for all construction work. A call to another spokesperson for the company was not returned.

According to the Office of Community Investment and Infrastructure, a city and state body that facilitates development and is involved in the shipyard project, land and vegetation clearing work is underway at the site and construction scheduled to begin this summer. A spokesperson for the office wrote that the ongoing work is subject to city and state requirements and is allowed under the city’s shelter-in-place orders. The clearing work, and the installation of a perimeter fence, is permitted by the Department of Public Works.

Ralph Bormann from the Bay Area Air Quality Management District, a regional monitoring agency, said the district had received a dust complaint and a copy of the video showing the soil disturbance. As a follow-up, Bormann said, an air district inspector set up a meeting with the developer to review the plan for combating asbestos, a carcinogenic substance that is naturally occurring in the area and can become airborne through earth-moving activities.

“Lennar staff mentioned that they were working in the area of the alleged incident on that day,” Bormann wrote in an email statement. “Air District staff will continue to keep an eye on the area in order to ensure that the asbestos dust mitigation plan is followed.” The San Francisco Department of Public Health did not reply to a request for comment.

This dispute over toxic dust in San Francisco’s Bayview-Hunters Point community coincides with a global pandemic of a disease that can cause respiratory distress, and with a broader national conversation about environmental racism spurred by the Black Lives Matter movement. Emily Wimberger, a lead researcher on a recent report from a research firm called the Rhodium Group, said there are disproportionate health impacts of environmental pollution on communities of color.

“What we found when we looked at this data is that both Black and Latino Americans face higher exposure rates than white Americans in all categories,” Wimberger said. “The average Black American is exposed to nearly 50% more diesel particulate matter emissions than white Americans, 22% more air toxic respiratory hazards and almost 20% more cancer risks.”

Wimberger said the group’s report was produced to help inform a national conversation among policymakers about how federal stimulus dollars should be spent in a way that will offer benefits to more impacted communities.

“That remains the challenge at the federal level,” she said. “How do you take those dollars and really direct them to benefit those communities that have been identified as bearing the brunt of just so many injustices?”

Rebecca Bowe is a freelance reporter based in Oakland. She previously produced online and radio stories at KQED News, and worked as an editor and reporter for the SF Bay Guardian.