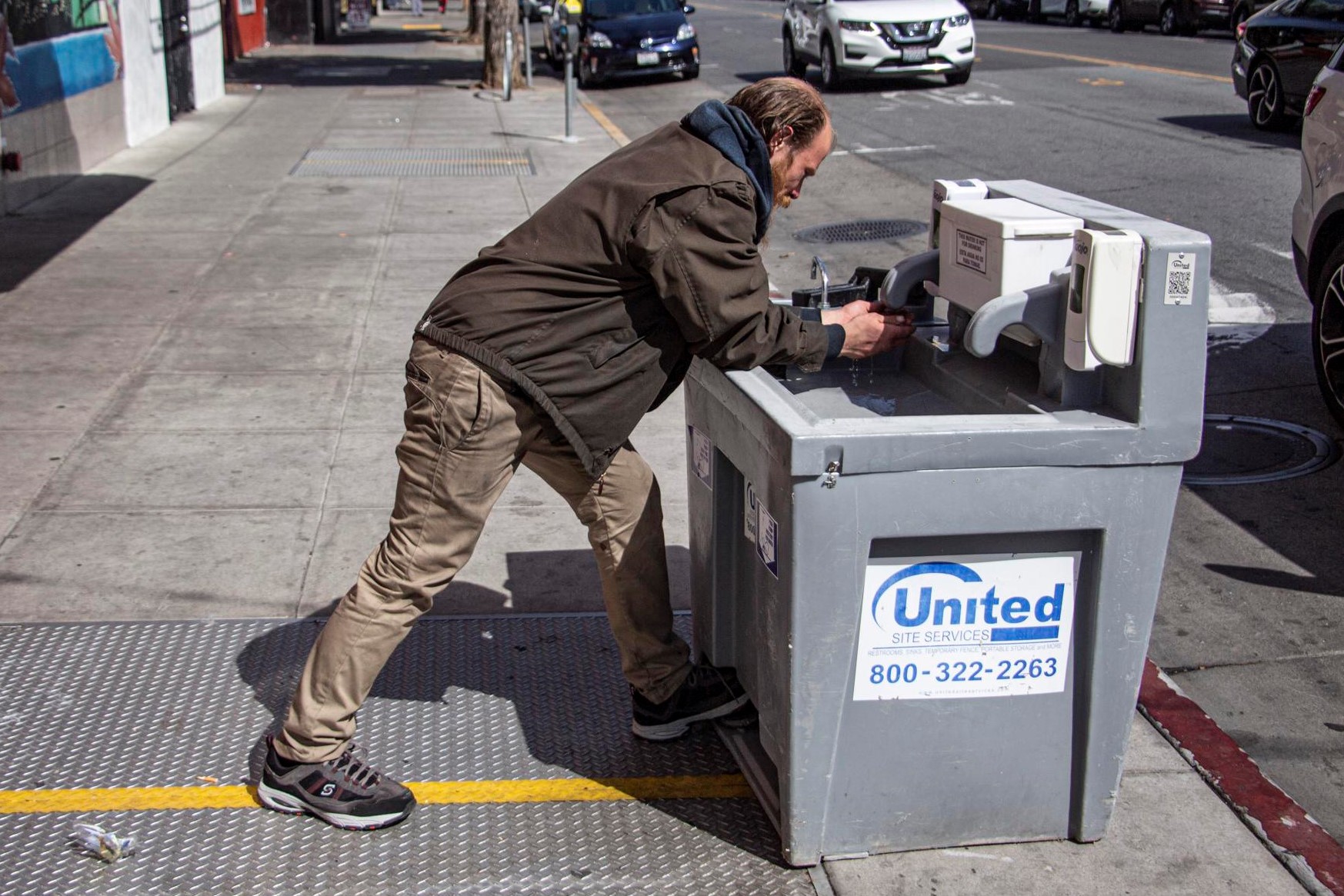 When Steve Nicol tried to use a portable handwashing station at 9th and Mission streets, he discovered that one of the sinks did not produce water and no paper towels remained. This was one of many stations that the Public Press found in various states of disrepair on March 15. The San Francisco Department of Homelessness and Supportive Housing contracted private company United Site Services to install them throughout the city, to slow the spread of coronavirus by enabling homeless people to wash their hands any time of the day. Photos by Brian Howey // Public Press

Barely a week after city leaders installed emergency handwashing stations across San Francisco to slow the spread of the coronavirus among the homeless, many of those stations were missing or had fallen into disrepair. Officials blamed the deteriorated facilities on overuse as public health measures took effect and said the contractor in charge of maintaining the stations had probably placed the missing stations in the wrong locations.

A spokesperson for the Department of Homelessness and Supportive Housing said the department was working with the company that owns and maintains the stations to fix those that are broken and locate the missing ones as soon as possible.

The handwashing stations are one of several methods the city has employed to mitigate the spread of coronavirus in vulnerable communities that lack regular access to running water, such as homeless encampments. Outreach workers have also been deployed citywide to provide sanitizer and information about the virus to people living in recreational vehicles and tents.

Each station includes two or three faucets, powered by foot or hand pumps, two to three soap dispensers and a paper towel dispenser.

The first set of stations rolled out March 8, and more were added March 12. At least 24 stations have been delivered to 21 sites. An interactive map on the Department of Public Health and the Department of Emergency Management websites shows the address of each station, the hours of operation, and the date the station was made available.

As of March 16, four of the stations were not in the location indicated by the map, including one in the Bayview, two in the Mission District and another in Japantown. At least eight had one or more empty soap dispensers or clogged sink basins full of dirty water. Seven had one or more broken faucets.

“Everybody’s very, very focused on this,” said Abigail Stewart-Kahn, spokeswoman for the Department of Homelessness and Supportive Housing. United Site Services, the portable restroom company that owns and services the stations, has been made “very aware” of the broken and missing portables, she added.

At first, the stations were “being well maintained as they were being rolled out,” she said. But as businesses shuttered en masse over the weekend in response to social distancing recommendations from public health authorities, access to handwashing facilities went with them, leading to a drastic increase in wash station use, Stewart-Kahn noted.

“We’re adjusting services to those sites as we speak,” she said, adding that the company services the portable sinks once daily.

United works “diligently” to carry out work for their contract partners, Vice President of Marketing and Communications Nina Jankowski wrote in an email, adding that she was “unable to comment on the details of any specific agreement.”

According to the city map, United should have installed a wash station March 12 near the Little Bethany Baptist Church in the Bayview district, an area with the highest concentration of RV-dwellers in the city. As of March 15, the station had not been delivered and Bethany Baptist Pastor Andrew Smith said he hadn’t seen it. “We’ve never had a handwashing station out here,” he said.

Debbie Patton, who lives in a tent near the site where one of the missing stations should be, said she would welcome access to soap and running water during the outbreak.

“We use the restrooms at the park, but after they close, we’re basically on our own,” she said, adding that having the station there would be welcome because “a lot of people, they need it.”

On the top of one station in the Castro, a user wrote, “Only ½ works. Hand sanitizer please.”

Two of the portable sinks were at least one block away from the location marked on the map. At least one station — found by accident — was not on the map provided by the health department. It appeared to have been dismantled.

Brian Edwards, an advocate for the Coalition on Homelessness, described the broken and missing wash stations as “wildly alarming.”

“We’re going into a shelter-in-place order, and there’s 10,000 homeless folks who can’t shelter in place,” Edwards said, referring to Mayor London Breed’s announcement Monday that San Francisco and five other Bay Area counties would order residents to shelter in place for three weeks. “For our unhoused neighbors, their only line of defense against COVID is enhanced hygiene. If they can’t find the resources that the city provides for them, that’s alarming.”

Homeless department outreach workers determined where the stations would be placed based on their knowledge of the locations and concentrations of the city’s unhoused, Jeff Kositsksy who is slated to step down as director of the city’s Department of Homelessness and Supportive Housing this month to coordinate street outreach programs, said in a March 13 interview about the handwashing stations.

The department had planned to roll out 10 more stations within a week, but demand for the portable sinks has grown so much in the wake of the coronavirus, they have become difficult to find, he added.

“We don’t know if we can get them,” Kositsky said. “There’s just not enough stuff to meet all of the needs.” He added that his department needs more of “everything,” including outreach workers, in the midst of the viral pandemic.

The Homeless Outreach Team, a group of social workers coordinated by the homelessness department, has 45 staffers performing streel-level outreach at homeless encampments, offering hand sanitizer and information about healthy best practices during the outbreak, he said, but an additional 20% of the positions on the team are vacant. More outreach staff would be deployed in the coming days, he said.

Several unhoused people who stay near the handwashing stations around the city confirmed that the city’s outreach team had delivered sanitizer and information to them in the past week.

Both city and volunteer outreach workers had stopped by within the last several days, said Bruce Johnson, who stays near Haight and Ashbury, about both the Homeless Outreach Team and the Homeless Youth Alliance, a non-profit homeless outreach group. “They do everything they’re supposed to do,” he said.

Listen to Brian Howey talk about his reporting on this issue on “Civic.”

Correction (March 17, 9:55 a.m.): An earlier version of this article erroneously referred to Abigail Stewart-Kahn as the interim director of the Department of Homelessness and Supportive Housing.