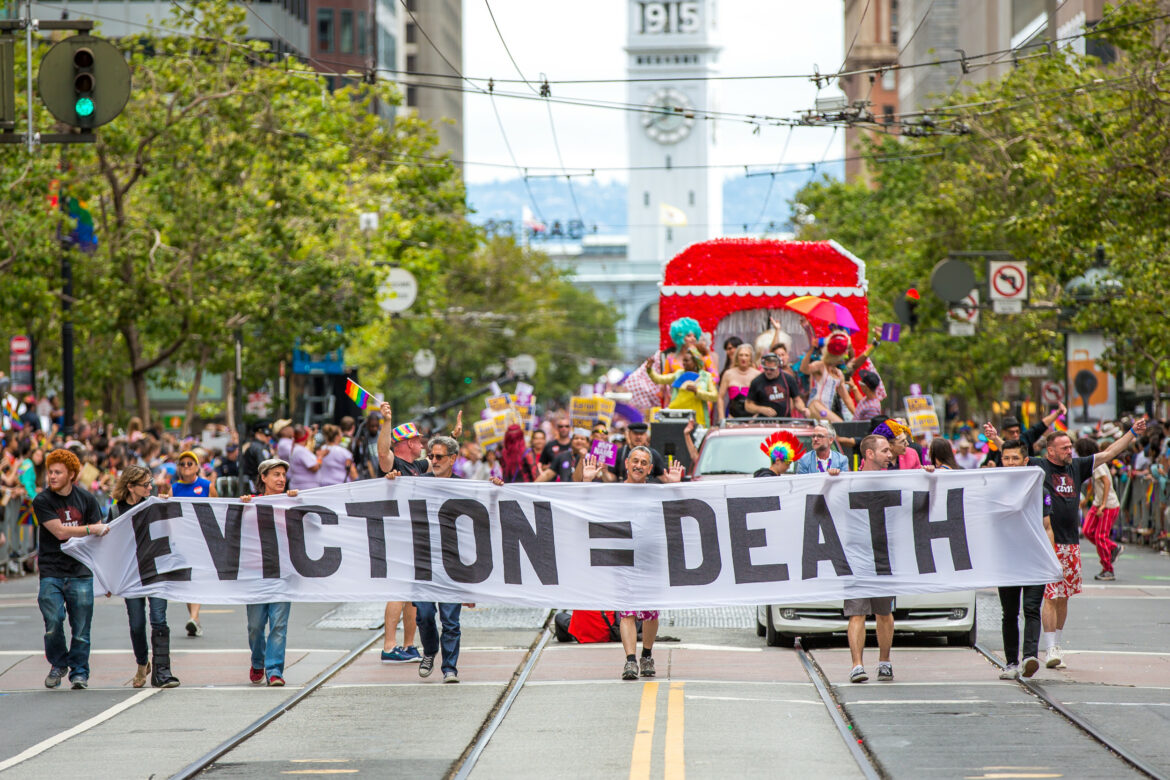 San Francisco’s high cost of living has made anxieties over widespread evictions a leading political issue for years — for example, at the city’s 2015 Gay Pride Parade. But now, with the end of the statewide eviction moratorium in sight, the threat of displacement may be greater than ever.

A wave of evictions could wash across the city next month, tenant attorneys say, even as lawmakers scramble to prevent widespread displacement.

“I’m afraid that we’re talking about thousands of people,” said Ora Prochovnick, director of litigation and policy at the Eviction Defense Collaborative.

The statewide moratorium on evictions for unpaid rents that were due during the pandemic ends June 30 — and recent legislation by San Francisco lawmakers will not change that. State officials are working to extend the moratorium but have yet to reach an agreement. Prochovnick is preparing for a cascade that could overwhelm the city’s free legal defense system if state talks fall through and throngs of residents get pushed from their homes.

As part of their ramp-up efforts, Prochovnick and her staff this week ended remote work and returned to their offices in the South of Market neighborhood to meet in person with tenants who lack broadband internet access or struggle with requesting help online or by phone. People seeking legal help can show up without an appointment on Mondays, Wednesdays and Fridays, from 10 a.m. to 11:30 a.m. and 1 p.m. to 2:30 p.m.

A combination of local and state regulations temporarily stalled eviction for unpaid rents due from March 1, 2020, through June 30, 2021, as long as those payment lapses are traceable to a COVID-19 hardship. Come July 1, the eviction moratorium will lift and San Francisco landlords will be able to evict tenants who have not paid at least 25% of the rents owed since Oct. 1, 2020. Unpaid rents for earlier months of the pandemic cannot be cited as cause for eviction.

Gov. Gavin Newsom said he is trying to extend the moratorium: “We’re working with legislative leaders to come up with a proposal that will be supported both by the state Assembly and the state Senate,” he said during a June 10 interview on Univision. “More on that very, very soon.”

A potential shock to the legal system

The Right to Counsel program contracts with attorneys from 10 nonprofits, including Eviction Defense Collaborative, which does case intake for the entire program. Right to Counsel was created after San Francisco voters in 2018 approved a measure ensuring that every tenant facing eviction would receive legal counsel.

Before the pandemic, the program was already overburdened, unable to provide full-service defense to everyone who requested it.

In 2019, San Francisco landlords filed 2,638 evictions. If this year sees as many filings with the bulk of them coming in the second half of the year, it would overwhelm the system’s 50 defense attorneys, who can handle about 2,350 eviction cases over 12 months, Prochovnick said.

“That contemplates cases spread out over time, not a tsunami of cases hitting all at once,” she said. “We fear that when that tsunami hits, we won’t have the capacity to provide everybody the full scope of services.”

Prochovnick said her concerns about evictions were driven by two indicators: figures on rent debts and the slowness of rent-relief programs in San Francisco. Unpaid rents totaled between $13.6 million and $32.7 million per month in the first six months of the pandemic, the Budget and Legislative Analyst’s Office estimated in October. Tenants are protected from eviction for nonpayment during those months, but the city has not produced a more recent analysis showing whether rent debts have continued accumulating — if that has happened, then it’s possible that many households were unable to pay landlords the 25% needed to avoid displacement. They may be able to hit that threshold with money from federally funded programs but, as of May 27, just four households in the city had received that rent assistance out of more than 2,650 applicants.

Prochovnick said her team — which receives potential cases and assigns them to staff attorneys or those at organizations within the Right to Counsel program — will assess tenants using “vulnerability scores.” Higher scores will get full-scope legal aid, and will go to elderly residents and parents, as well as people who speak limited English, have physical or mental health challenges, live in subsidized housing or were previously homeless. They will have an attorney assigned to them throughout their cases, including preliminary discussions on strategy.

People who don’t score high enough will receive coaching from attorneys — but they will have to represent themselves. Attorneys will help these tenants draft their defense arguments. They’ll also explain the steps and timing of the legal process to help those facing eviction avoid an automatic loss for failing to follow the rules.

Full-scope representation yields the highest success rate, meaning that tenants get to stay in their homes — 67%, compared with 38% for tenants coached on self-representation — according to the Mayor’s Office of Housing and Community Development.

Courts may be overwhelmed, too

Local eviction cases go through San Francisco Superior Court, which has yet to fully reopen. Proceedings are still happening on Zoom. Prochovnick said she doubts the court system could accommodate a dramatic spike in cases.

“There’s no way that the court will be able to handle that number of trials,” she said.

That could buy some time for tenants in eviction cases, which generally take less than a month from initial notice to court ruling, she said.

But Prochovnick is concerned that many tenants won’t resist eviction — that when they see the notice on their door, “they’re just going to leave. I’m hoping that the word can get out that they don’t need to do that.”

“This is their home and they have rights and protections that might enable them to preserve their housing,” she said.

How to get help: If you are facing eviction, call the Eviction Defense Collaborative at (415) 659-9184 or send an email to le[email protected] as soon as possible. The organization advises that tenants respond within five days of being served with court papers to avoid the risk of a default judgment against them.