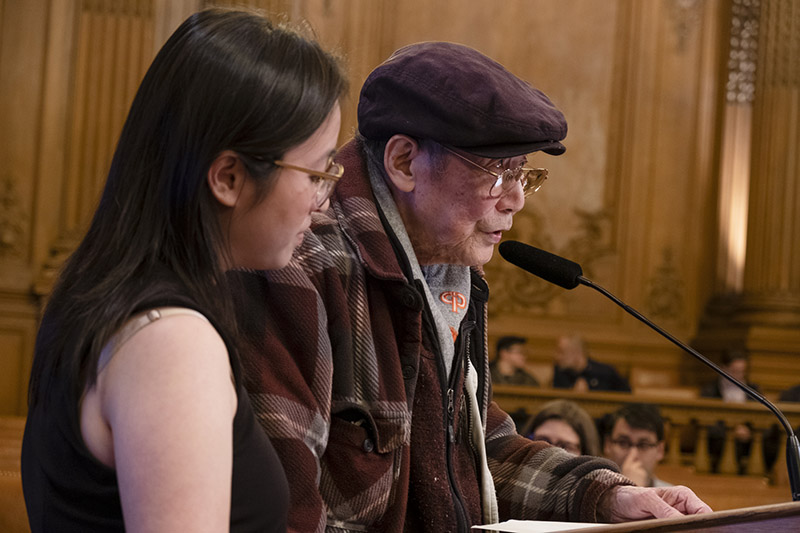 A tenant tells the Board of Supervisors Land Use and Transportation Committee that legal representation helped keep him and his wife in their home of 40 years. Photo by Yesica Prado // Public Press.

Laura Wenus, Reporter & Host for "Civic" |
LikeTweet EmailPrint More
Voters approved a measure in 2018 that guaranteed legal counsel to every tenant facing eviction in San Francisco. But six months after Proposition F was supposed to have been fully implemented, a third of tenants facing eviction have had access to only partial representation.

“It’s sick that tenants are coming back to our office, with Prop. F, saying there’s not a lawyer for them,” said Sarah “Fred” Sherburn-Zimmer, executive director of the Housing Rights Committee.

In a hearing before the Board of Supervisors’ Land Use and Transportation Committee, legal aid attorneys, tenant advocates and city staff testified that tenant right to counsel as established under Proposition F is an effective protection from eviction, and an efficient and a cost-saving method of preventing homelessness. But, they said, the program needs more funding, and more attorneys, to cover everyone.

It costs more than $222,000 to provide high-quality legal representation for 50 cases, which is the average caseload for one tenant attorney under the program, according to the Mayor’s Office of Housing. That includes $75,000 to cover the full-time salary of an attorney working for one of the nonprofit partners organizations that the city pays to provide legal representation to tenants. The total cost also includes litigation fees, as well as part-time paralegal, social worker, supervising attorney and intake worker assistance.

Compared with the cost of constructing a unit of below-market-rate housing, providing tenants with legal counsel is inexpensive, said Supervisor Dean Preston. And 85% of the tenants represented under Proposition F, according to the report from the Mayor’s Office of Housing, were extremely low or low income. It would take $3.7 million in additional funding to hire the 17 additional attorneys the city would need to handle current demand for representation, Preston estimated.

For now, tenants’ needs surpass legal aid attorneys’ availability, and many tenant lawyers who testified at the hearing said they are pushing themselves to their limits.

Alex Lemberg, an attorney with Open Door Legal, said he and his team rushed to open 81 cases in the three months last year when Proposition F protections were being rolled out.

“The psychological strain was incredible, and the only thing that kept us going was our belief in this mission,” Lemberg said.

“None of the practitioners should have to be representing as many clients as they are,” said Cary Gold, a director of litigation and policy for the the Eviction Defense Collaborative. “We are saying the funding is supposed to be funding for an attorney to do 50 cases. And we have established that if that is all the attorney is doing, they will not have to be working until late, late hours of the night at their low nonprofit wages.”

For tenants who can access only limited legal assistance, evictions are difficult to fight. Courtney McDonald, an aide to Supervisor Matt Haney, told the committee about a formerly homeless veteran living in SoMa who received only limited help filling out forms in response to an eviction. In the end, she was evicted, slipped back into homelessness and transitioned into a navigation center down the street from where she previously lived, McDonald said.

Laura Slade Chiera, executive director of Legal Assistance to the Elderly, said her organization gets more than 1,600 calls a year, about 60 percent of which are for help with housing. She brought with her to the hearing a 92-year-old tenant who testified that Legal Assistance to the Elderly had helped him and his wife stay in their home of more than 40 years. He added that if the landlord tried any new tactics to get them to move out, he would certainly need legal representation again.

“We need more attorneys and we need to pay them more,” Chiera said.