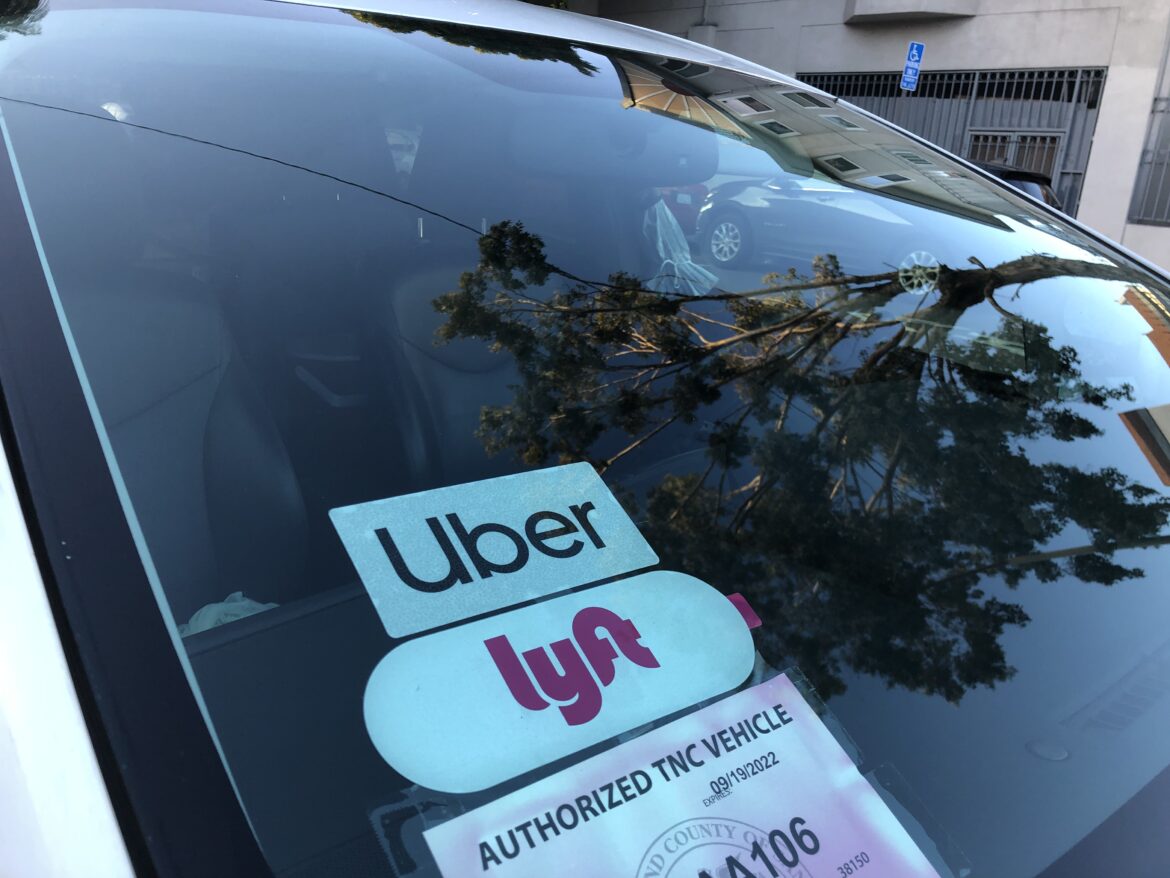 The state agency responsible for ensuring that rides with Uber and Lyft are safe has acknowledged that it failed to consistently monitor passenger complaints about rapes and assaults for years.

The California Public Utilities Commission confirmed in an unpublicized ruling that it had let the ride-hailing giants use varying definitions of sexual assault and harassment in their mandatory reports to the agency since at least 2017.

According to the ruling, the varying definitions “could impact the total number and types of incidents reported in their annual reports.”

That means the agency — the industry’s primary regulator in California — may not know how many assaults are alleged to have happened and whether the companies investigated each one and suspended culpable drivers.

Terrie Prosper, the commission’s spokeswoman, did not reply to questions sent by email about the data reporting problem, saying only that it “will be addressed by the Commission.”

The breakdown in regulatory oversight was hidden for years because of extraordinary secrecy the commission conferred on the companies’ annual safety reports, withholding them not only from the public and the media but also from other state and local officials.

The agency is only now beginning a process to develop uniform “taxonomies,” or classifications, to ensure ride-hailing firms consistently report assault complaints.

“The need for uniform sexual assault and sexual harassment taxonomies has been a growing concern for the commission,” said the Dec. 9, 2021, ruling by commissioner Genevieve Shiroma, who is overseeing the proceeding for the agency.

Unlike taxis, which are regulated locally, ride-hailing is governed by the commission. It is the only agency that collects comprehensive safety data about their operations across the state, requiring each firm to file annual reports that consist of spreadsheets with entries on each complaint.

The commission’s faulty collection of assault data came to light last October, after the Public Press obtained data from the 2020 annual safety filings for Uber and Lyft under the California Public Records Act.

It was the first public disclosure of any annual ride-hailing safety reports, and it revealed that the firms’ spreadsheets had widely varying numbers. Lyft included nearly 12 times the number of assault records that the much larger Uber did for the same one-year period ending Sept. 1, 2020.

As the Public Press reported at the time, a Lyft spokeswoman commented that “It’s impossible to use these reports to draw accurate comparisons between Uber and Lyft.” She added, “Instead, what this data reveals is two companies making very different choices about definitions and how they categorize and share data about incidents.”

Two days after releasing the reports, the commission sent letters to Uber and Lyft ordering them to provide all definitions of assaults used in their reports for the last five years.

The company responses confirmed the problem, according to the commission ruling. Neither the commission nor the firms would release copies of those replies.

But according to the ruling, the agency found that for its 2017, 2018 and 2019 annual reports to the commission, “Uber did not provide a definition of assault or harassments.” And when Uber published its own “U.S. Safety Report” in 2019 the firm “adopted a more expansive approach to identifying sexual assault and sexual harassment claims,” it said.

That report listed 5,981 alleged incidents of sexual assault and harassment in 2017 and 2018 nationally. It did not show the number by state, but Uber later told the commission that 1,243 — or 21 percent — were in California.

Uber based the definitions for its “U.S. Safety Report” on information from “Helping Industries to Classify Reports of Sexual Harassment, Sexual Misconduct, and Sexual Assault,” a study by the National Sexual Violence Resource Center and the Urban Institute, the ruling said.

Lyft, by contrast, used its own “internally defined incidents of assault and harassment” for its reports to the agency for 2017 to 2019, the ruling said. But sometime prior to June 2019 Lyft used another definition from the U.S. Department of Justice. Then, in June 2019, Lyft began using definitions developed by RALIANCE, a national sexual violence prevention organization, the ruling said.

Lyft also used the RALIANCE taxonomy for the “Community Safety Report” it published in 2021, which acknowledged 4,158 alleged sexual assaults nationally, including 360 alleged rapes, related to rides in 2017, 2018 and 2019. It did not state the number in California.

Despite these shifting definitions, the companies say they gave the commission all required data.

Andrew Hasbun, Uber’s head of safety communications, said in an email, “In regards to the annual reports, we provided the CPUC with the information they requested.”

Ashley Adams, senior communications manager at Lyft, said, “We believe we’ve accurately reported the information we were asked to provide.”

The inconsistent reporting apparently stems from the agency’s unclear instructions to the firms, what Adams previously called “incredibly broad and imprecise” terms open to broad interpretation.

Susan B. Sorenson, a professor of social policy at the University of Pennsylvania who has studied the epidemiology and prevention of sexual assault, commenting on the Public Press’ findings last fall, said the commission had not followed standard practice of using clear definitions necessary for gathering reliable data. She also questioned whether the agency possessed flawed data for years and “apparently didn’t notice.”

Lorena Gonzalez, then-chair of the state Assembly’s Appropriations Committee, said at the time, “I could get my 10-year-old to create a Google doc to better track this than what’s happening.” (Gonzalez left the Assembly earlier this month to become leader of the California Labor Federation.)

Prosper, the commission spokeswoman, did not reply to an email asking if the agency ever had consulted experts on the collection of assault data.

In the ruling, Shiroma agreed that “it will be beneficial to adopt standardized taxonomies for sexual assault and sexual harassment.” She said the commission would review the issue and directed interested parties to file opening comments on the matter by Jan. 21.

The agency is also considering releasing all annual ride-hailing safety reports for 2014 to 2019, although it would still let the firms keep trade secret and personal information confidential. Opening comments are due Feb. 11.

The commission’s Consumer Protection and Enforcement Division and Uber have jointly filed a motion calling for the agency to order the release of these records. The motion is part of a settlement of the agency’s regulatory action against Uber for refusing to turn over information concerning sexual assaults noted in its “U.S. Safety Report.”

Under the settlement, Uber also agreed to pay a $150,000 fine, along with $9 million to support safety measures. As much as $4 million will go toward hiring “industry experts” to address physical and sexual violence in the passenger carrier industry like ride-hailing cars, limousines and chartered buses, including the development of best practices for handling complaints.

Lyft, however, is opposing the motion to release the annual reports, which was hammered out by Uber and the consumer unit in private negotiations. In a Jan. 18 filing, the firm contended that the motion had a “suspect legal standing,” “murky origins” and “collusive underpinnings.” Lyft said the matter should instead be addressed through the commission’s regular rule-making process, which Adams called “broader and more inclusive.”

Prosper did not respond to a request for comment on Lyft’s filing, which was first reported by Bloomberg Law. Uber’s Hasbun declined to comment.

The ride-hailing rivals say that more than 99 percent of their rides end without safety issues, and that they have added many security features to their apps. Uber, for example, has a feature called “share status,” which lets riders send their location to friends or family. Lyft has a similar option.

An earlier investigation by the Public Press found that the commission made the annual reports confidential by adding a one-sentence footnote to the 2013 regulations that legalized ride-hailing in California, without prior public discussion, amid what the state Fair Political Practices Commission later found to be illegal industry lobbying.

Due to an editing error, a previous version of this article omitted a paragraph describing the methodology used in Uber’s “U.S. Safety Report.”

Uber declined to comment prior to publication of this story, but afterward provided additional information about its taxonomy, or system for classifying and reporting sexual assaults. Hasbun emailed material stating that Uber funded the 2018 study it undertook with National Sexual Violence Resource Center and the Urban Institute to develop the taxonomy used for its 2019 published safety report. Afterward Uber and NSVRC, which is part of RALIANCE, made the taxonomy available as a public resource, hailing it as a benchmark in corporate accountability.

Lyft’s Adams said in an email that Lyft used the same taxonomy for its 2021 published report.

One question that may arise before the commission is whether it will adopt this taxonomy for the mandatory reports that each ride-hailing firm must submit to it annually, or consider other methods of categorizing and reporting assaults.

A months-long investigation by the San Francisco Public Press revealed that the California Public Utilities Commission — the agency charged with regulating the state’s ride-hailing firms — has kept reports on thousands of accidents involving Uber and Lyft under wraps.