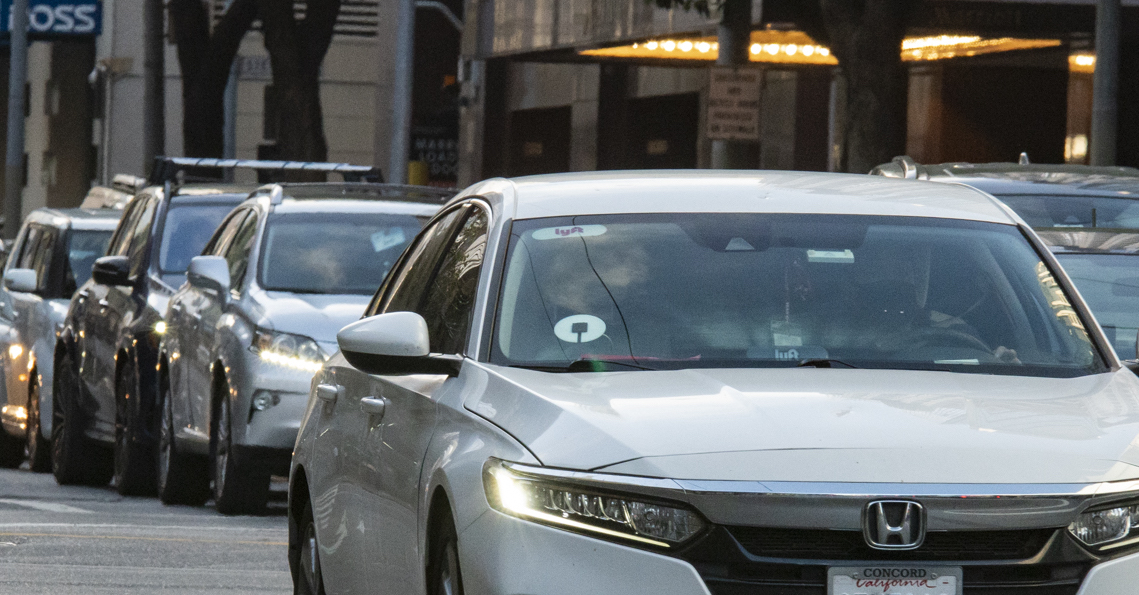 Local governments have been frustrated in their efforts to get state data that could help protect Uber and Lyft passengers.

Two key elected officials have criticized the California Public Utilities Commission’s inconsistent collection of information on passenger complaints about assaults and threats on Uber and Lyft rides and called for reforms.

A leading researcher on sexual assault added that the commission’s methodology was out of line with accepted practice and that it suggested a “lack of concern” about monitoring the incidents.

The agency, meanwhile, issued a proposal under which it would hire “industry experts” to review its practices for the mandatory company reports on sexual assaults and other violent incidents.

The San Francisco Public Press reported Oct. 20 that the commission had failed to collect consistent data from the ride-hailing giants on complaints about drivers. Instead, the agency permitted the firms to interpret the reporting requirements differently, resulting in widely varying numbers and raising questions about the data’s reliability.

Each ride-hailing firm must report to the agency on drivers suspended or deactivated for allegations of assaults, threats and harassment on its rides. The most recent reports show that Lyft entered 18,178 records — nearly 12 times the number that its much larger rival Uber did — during the same one-year period ending Sept. 1, 2020.

Uber reported that it suspended or deactivated 1,573 drivers for those allegations during that time.

“It is the CPUC’s responsibility to ask for data in a way that’s clear and consistent so that they’re not being given these kind of wild inconsistencies,” said Lorena Gonzalez, chair of the state Assembly’s Appropriations Committee, in an interview with the Public Press about its findings. “This is a clear example of the CPUC really punting their responsibility.”

Rafael Mandelman, a San Francisco city supervisor and chairman of the County Transportation Authority, said in an email in response to the findings, “The CPUC has failed to carry out its mandate to monitor the public safety impacts of Uber and Lyft’s hostile takeover of the taxi industry. These companies have operated effectively unregulated for over a decade with no clear data on assault, harassment or collisions.”

He added, “Our state leaders need to step up and make significant structural changes to the CPUC’s relationship with these companies or allow local governments to implement regulatory plans that meet the needs of our communities.”

Unlike taxis, which are regulated locally, ride-hailing is regulated by the commission. It is the only agency that collects comprehensive safety data about the companies’ operations across the state.

California in 2013 became the first state in the nation to legalize ride-hailing, and since then has required each firm to submit annual reports on safety complaints. But under an extraordinary grant of secrecy to the industry — contained in a one-sentence footnote to the regulations — the commission withheld the data. The agency repealed the footnote last year, but only for upcoming reports.

The 2020 assault data was released to the Public Press under the California Public Records Act, the first time any of the annual reports have been open to outside scrutiny.

Two days after releasing the reports, the commission sent letters to Uber and Lyft ordering them to provide all definitions of assaults and other misconduct used in their reports for the last five years.

Terrie Prosper, the commission’s spokeswoman, acknowledged the problem with the reports from the firms, formally known as transportation network companies and referred to as TNCs. “In the annual report information provided to you, each TNC defines that data they have provided to the CPUC,” she said in an email. “The CPUC is aware of this definition issue and may consider it as the CPUC addresses the reports.”

Prosper did not comment directly on the criticism of the commission’s collection of data.

The Public Press cited interviews and previously confidential reports in revealing the commission’s inconsistent data. Ashley Adams, a Lyft spokeswoman, said in one email, “It’s impossible to use these reports to draw accurate comparisons between Uber and Lyft.” She added, “Instead, what this data reveals is two companies making very different choices about definitions and how they categorize and share data about incidents.”

Adams said that the commission’s instructions to the firms included “incredibly broad and imprecise” terms that were open to wide interpretation.

Lyft included all records concerning each complaint, meaning there were redundant entries, as well as complaints for which drivers were not suspended or deactivated, she said in an interview.

As a result, she said, the firm had fewer alleged incidents than it might seem based on the number of entries in its report to the commission. She declined to say how many individual incidents, suspensions and deactivations there actually were.

Andrew Hasbun, head of safety communications at Uber, declined to comment on Lyft’s report, but said in an email that Uber by contrast submitted the actual number of drivers suspended or deactivated. He later emailed that “any characterization that Uber under-reported is simply not accurate.”

The agency requires each firm to report the complaints on a spreadsheet template titled, “Assaults & Harassments — TNC drivers suspended or deactivated for assaulting, threatening, or harassing a passenger or any member of the public while providing TNC services.”

For the 2020 reports, the commission defined those terms by providing a list of no fewer than 48 examples of conduct that the firms must report within a single field on the spreadsheet. They vary widely from physical and sexual assault, to homophobic, racist and sexist comments, to generally making a passenger “uncomfortable.”

Susan B. Sorenson, a professor of social policy at the University of Pennsylvania who has studied the epidemiology and prevention of sexual assault, said in an interview that the research community established a generation ago the need for clear definitions to gather reliable data. Commenting on the Public Press’ findings, she expressed surprise that the agency had not followed standard practice for monitoring the incidence of assaults.

“It speaks to an apparent lack of concern,” said Sorenson, who has served in many advisory roles and was a member of the National Academy of Sciences’ Panel on Research on Violence Against Women. “Particularly that they had these reports for five years and apparently didn’t notice. It’s very clear that the CPUC needs to implement clear definitions.”

Assemblywoman Gonzalez said bluntly, “I could get my 10-year-old to create a Google doc to better track this than what’s happening. It’s not that complicated.”

She added, “It makes no sense to me that they kind of threw out these parameters, and of course they got these wildly different reports. And we still don’t have all the information that we would need as legislators, as the general public, to determine whether or not this is even a safe option for riders or drivers.

The commission redacted the 2020 reports released to the Public Press to protect what it said was personal privacy and sensitive business information.

Gonzalez said that the agency’s secrecy about the safety reports over the years may have contributed to its collection of inconsistent data. It even refused to share them with other government agencies looking for patterns that could help improve safety.

“First of all, what good is the data if it’s not public?” she said. “And of course, without sharing it, then we don’t know that the two main companies are providing data in a completely different way. So, it has to be more clear. I think that’s something that we have to go back and insist.”

Sorenson questioned whether the agency, in having kept the reports confidential, was more concerned with protecting itself from public review than protecting passengers.

Assaults on Uber and Lyft rides — even if they happen on a tiny fraction of overall trips — have been a national concern since the industry began. Hundreds of civil lawsuits accusing the firms and their drivers of sexual assault and negligence have been filed across the country. Some drivers have been criminally prosecuted.

Under public pressure, the companies have separately published their own safety reports. Lyft on Oct. 21 released its long-awaited “Community Safety Report,” saying that in 2017, 2018 and 2019 it had received accounts of 4,158 sexual assaults, 10 fatal physical assaults and 105 fatal accidents in relation to its service throughout the United States.

In 2019 Uber released a “US Safety Report” saying that in 2017 and 2018 it received 5,981 accounts of sexual assault, 19 fatal physical assaults and 107 people killed in vehicular accidents nationally.

Those corporate publications do not disclose the number of incidents by state or city. They do not cover as many kinds of incidents as the mandatory state reports do. And they are not submitted under penalty of perjury, as those reports are.

According to the proposal announced Oct. 29, the commission would address how the industry should best report to it on violent incidents during rides. It would also consider releasing redacted versions of all ride-hailing safety reports filed with the agency from 2014 to 2020.

The proposal is part of a settlement that would require Uber to pay a $150,000 fine and $9 million to support various safety measures. The settlement would resolve a 2020 recommendation from an agency judge that Uber pay a $59 million fine for refusing to provide information concerning the sexual assaults noted in its “US Safety Report.” The commission is scheduled to vote on it on Dec. 2.

The firms say that well more than 99 percent of rides ended without any safety issues, and that they have added many security features to their apps. Uber, for example, provides a feature called “share status,” which lets riders send their location to friends or family. Lyft has a similar option.

“We shouldn’t leave it up to the PR machines of Uber and Lyft to be releasing public data,” said Gonzalez. “And so, as terrible as Lyft’s report was just recently, the public report, we have no way of evaluating whether that’s the full story.”