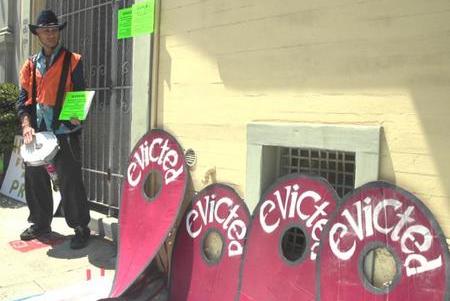 A protest in 2014 outside a building where residents had been evicted.

Months ago, legislators approved several layers of protections to keep renters from being kicked out and potentially made homeless during a pandemic. Now, several of those protections are expiring, though there are efforts under way to extend them and Gov. Gavin Newsom has said he supports an extension.

San Francisco’s suspension of nearly all evictions, including for non-payment of rent, expired Dec. 1. While a federal eviction moratorium is in place until Jan. 31, at the moment, San Francisco tenants who can’t make rent because of the pandemic are also protected by a California law that bars landlords from evicting so long as tenants continue to pay a quarter of their rents. That law, AB 3088, expires at the end of January, but its author, Assemblyman David Chiu, has put forward a proposal that would extend those protections through the end of the year.

Without that extension, Scott Weaver, supervising attorney at the Eviction Defense Collaborative and a volunteer with the San Francisco Tenants Union, says he expects many landlords will move to evict non-paying tenants.

San Francisco renters are also protected from being evicted for not paying the rent they owed between March 16 and Sept. 30, 2020, but they still owe the accumulated debt from all unpaid rent. While state and local governments and legislators have recommended that renters and landlords work out a payment plan for the rent they can’t pay now, Weaver advised against signing anything.

“The problem with a payment plan is, for somebody who is not employed, there’s really no telling when you’re going to be employed again,” he said. “Promising money that you haven’t earned yet, and you don’t know whether you’re going to earn, I think is not a good strategy.”

For landlords, there is also the changing rental market to consider. San Francisco rents have dropped dramatically, changing the incentives for landlords, Weaver said.

“In the rental market that we’re used to, rents keep going up, up, up, and landlords have a financial incentive to evict because they can get more rent on a vacant unit.”

With depressed rents, that may no longer be the case, he said. “The landlord has to think about, well, what is the benefit to me of evicting this person when they may be able to pay it two months from now?”

That leaves the pressure on long-term tenants whose rents have been kept low by rent control, Weaver said, since the difference between their rents and what a landlord could charge even in the new slightly cooler market may be enough to create an incentive for a landlord to evict them.

For now, Weaver said he sees no indication that this cooling has stopped.

“There’s a whole bunch of stuff happening that suggests to me that we’re going to continue to see a downturn in rents,” he said.

With the pandemic raging, the Public Press is focusing on the most vulnerable renters in the nation’s most expensive housing markets. People living in subsidized housing risk of eviction and displacement. The reporting explores poor living conditions in public housing developments and the decisions made by public officials and private housing development companies. Stories also examine the limits of local and state eviction moratoria. The reporting team includes reporter Nina Sparling, data journalist Frank Bass and research assistants Ande Richards and Imran Ali Malik, who are students at UC Berkeley’s Investigative Reporting Program.