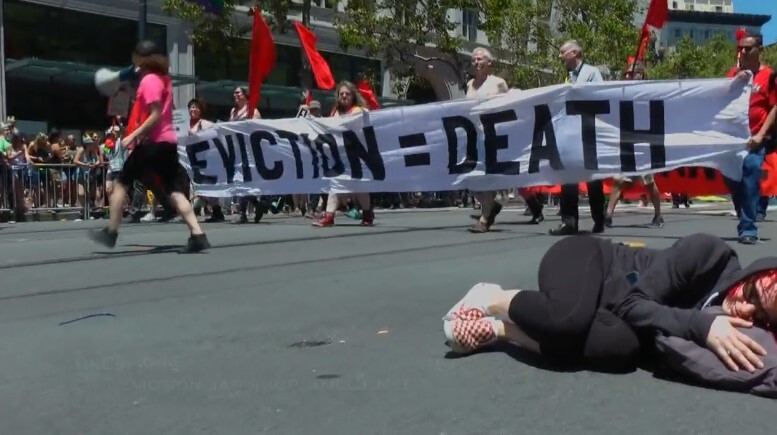 San Francisco Mayor London Breed Tuesday extended her eviction moratorium through the end of November. For many tenants, that will delay displacement — a longstanding political issue in the city, as exemplified by this demonstration at the 2014 Pride Parade.

Mayor London Breed on Tuesday gave San Francisco tenants an additional month to figure out how to avoid eviction, in light of economic hardships resulting from the COVID-19 pandemic.

Now, the soonest tenants could be evicted for nonpayment of rent would be December, a month later than the previously announced eviction moratorium was set to end. Hugo Ramirez, a staff member in Breed’s office, confirmed the information, which was initially reported by the Housing Rights Committee of San Francisco.

Tenants who are unable to pay rent between March 16 and Sept. 30 because of COVID-related problems had already been protected from eviction and Breed’s Tuesday action does not affect that. Her order blocks most other evictions in the city during that time frame. Tenants are not protected from eviction for failure to pay rent in October or November, but landlords could not legally move forward with those evictions until Dec. 1.

This is not the first time Breed has extended her moratorium near the end of a month, as it was on the verge of expiring. The housing group said this timing makes it more complicated for both tenants and landlords to plan ahead.

“She could at least have the decency to do it at the beginning of the month, so that tenants could make a plan to go to Stockton and move in with their sister, or make a payment plan with their landlord,” said Sarah Sherburn-Zimmer, the executive director of the Housing Rights Committee of San Francisco. “It feels really irresponsible for her to wait until the 11th hour to extend the moratorium.”

Andy Lynch, spokesman for the mayor, did not respond directly to Sherburn-Zimmer’s criticism. “We continue to extend the eviction moratorium 30 days at a time, which we are able to do as a result of the declaration of local emergency issued by Mayor Breed, in order to protect tenants who are struggling as a result of the impacts of COVID-19,” he said.

In mid-March, when the Mayor’s office ordered residents to shelter in place and non-essential businesses to close, San Francisco saw widespread income loss accompany a sharp downturn in the local economy.

The eviction moratorium, introduced as a temporary measure, protects residents who lost income from losing their homes. It has been extended periodically as the pandemic continues to affect renters.