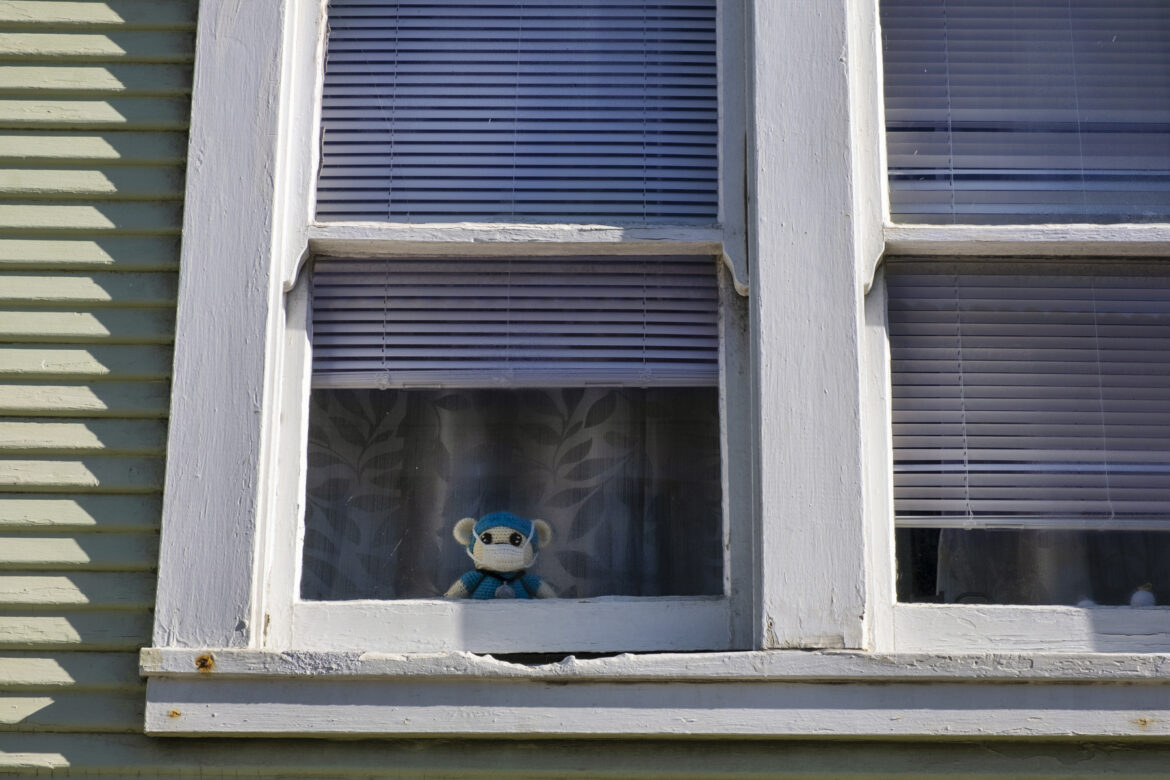 A crochet white teddy bear peeks through the window of a family home in the Ingleside neighborhood. The teddy bear wears blue scrubs, a stethoscope and a mask. As the COVID-19 pandemic stretches into its second year, evictions have resumed, and the city’s most vulnerable are bearing the brunt.

After an eight-month pause, court-ordered evictions in San Francisco have resumed, and they’re coming down hardest on some of the city’s most vulnerable residents.

The Sheriff’s Department has conducted evictions at 33 addresses across the city since the start of November 2020, according to documents obtained through a California Public Records Act request. More than half — 18 — involved tenants in permanent supportive housing. Those facilities provide social services along with subsidized rents and are intended to help people who had been homeless.

“The reason for the existence of supportive housing is to keep people off the streets,” said Supervisor Matt Haney, who represents the Tenderloin and South of Market neighborhoods. “It’s the worst possible failure.”

The figures underscore the gap between rich and poor. The pandemic has spurred an exodus from San Francisco, as thousands of well-paid workers have moved to less expensive locations while keeping jobs they can perform remotely. Meanwhile, less fortunate San Franciscans have been struggling to pay rent and provide food for their families, especially in lower-income neighborhoods like the Tenderloin and South of Market, where sheriff’s deputies have carried out more than two dozen evictions since last spring.

Local, state and federal measures were designed to protect tenants who could not pay some or all of their rent due to COVID-19. But landlords can evict for other reasons, including health and safety issues.

“It has happened, which is unfortunate, because this is the worst time to lose your housing,” said Adrienne Miller, who supervises social workers at the organization. She said those removals involved violent incidents that put other residents at risk.

Supportive housing accommodates people who struggle with many issues, including mental illness and substance abuse. The pandemic has made it more difficult for them to access in-person support services.

Meeting with mental health providers on Zoom or by phone “is not an option for most people living in supportive housing,” said Lauren Hall, director of Delivering Innovation in Supportive Housing, which runs facilities in the South of Market and Tenderloin districts. The organization has evicted two tenants since November for “extreme violence,” Hall said.

“Eviction is absolutely the last resort,” she said. “We are working incredibly hard to keep people in housing.”

San Francisco has nearly 8,000 units of supportive housing, which it uses to help homeless people get and stay off the streets. Community organizations receive city, state and federal funding to run those units, and many residents rely on government benefits to pay their rent.

But when tenants are evicted from supportive housing, they often have nowhere to go, advocates say.

“They usually become homeless,” said Sulaiman Hyatt, an organizer with the Housing Rights Committee of San Francisco, a tenant advocacy organization. “They’re on the streets.”

The pandemic has highlighted a long-standing challenge for supportive housing providers: preventing at-risk residents from returning to the streets.

According to a study published last year, a tenant who is evicted from one supportive housing site for behavioral issues such as violence may succeed in managing those issues in a different environment.

“Some people actually need that second chance,” said Dr. Margot Kushel, one of the study’s authors, who directs the Center for Vulnerable Populations at the University of California, San Francisco.

The Department of Homelessness and Supportive Housing has contracts with community organizations to provide housing and services. It receives monthly reports about tenants at risk of eviction.

Whether it is acting aggressively enough to address those risks is another matter. In an August 2020 report, the San Francisco Budget and Legislative Analyst found the homelessness department failed to provide adequate oversight of contractors. The report also found that nearly one-third of approved staff positions were vacant as of last summer.

In response to a request for comment, the department gave a written statement that was not attributed to a specific spokesperson: “In the extremely rare cases of clients losing their housing, there were really high bars to demonstrate that there was an imminent danger to other residents. We always want people to remain in their housing. We always encourage clients to conduct exit planning even if they are losing their housing status.”

Evictions are not limited to those carried out by the sheriff’s department. Law enforcement authorities usually become involved only if renters fail to respond to written demands from landlords or lose their eviction cases in court.

For privacy reasons, the sheriff’s department does not identify the names of tenants forced to leave their homes but does make public the addresses where deputies conduct evictions.

“The Sheriff’s Office is prioritizing the schedule of residential evictions where the court has made an explicit finding that health and safety concerns mandate immediate writ enforcement,” the department said in a written statement not attributed to a particular staff member.

When evictions result in homelessness, they expose people to health risks such as COVID-19, according to a recent UCLA study. Researchers found that in cities that lifted eviction moratoriums last fall, rates of both virus transmission and death increased.

“There’s no medicine as powerful as housing,” Kushel said.