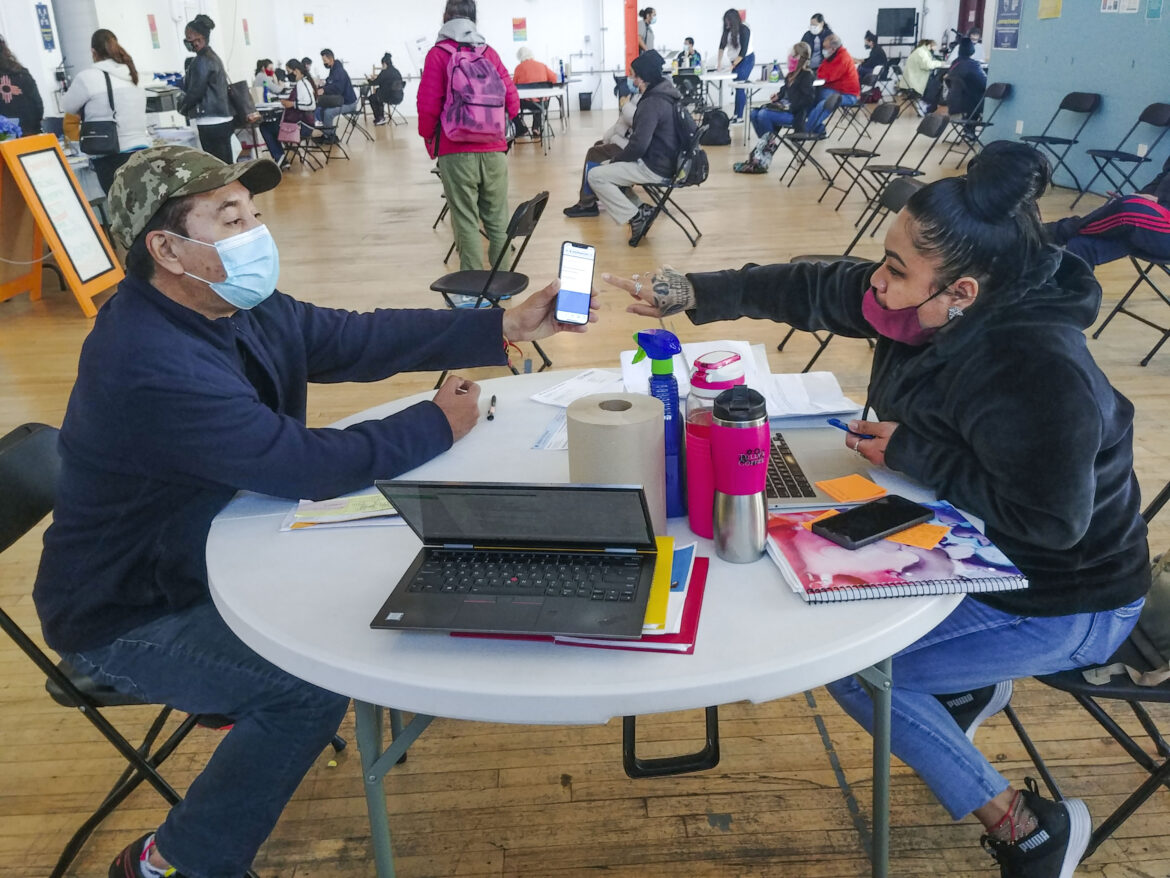 Anamaria Villanueva (right) is one of seven staff helping residents apply for the state’s rent-relief program. On a recent afternoon, Villanueva walked Carlos Rodriguez through the application step-by-step, assembling documents and calling his landlord when she needed additional information. Rodriguez faces possible eviction if he does not pay his $6,900 in rent debt.

Things were looking up for Carlos Rodriguez.

It was March 2020. After spending a decade outside the workforce due to injury, he had a job as a security guard for basketball games and other events at San Francisco’s Chase Center.

But we all know what happened that month: The coronavirus pandemic landed in San Francisco. Mayor London Breed ordered businesses to close. Events were suddenly a thing of the past.

And Rodriguez, 64, was laid off — like so many others.

“It was sad, I was just getting back on my feet,” he recalled. He bled his savings account dry to pay rent. Then he began going into debt.

Now his best shot at clearing that debt and avoiding eviction is the state’s rent-relief program, which launched in March and partially reimburses landlords for rents that tenants have not paid. But the application process can be difficult to understand, so Rodriguez is getting help from local nonprofit staff who walk him through it start-to-finish.

How to get help

To request help, people must call 415-612-2014 and leave a message describing their situation. Staff will call back in 1 to 2 weeks to determine whether they qualify for the state aid and, if they do, tell them what documents to bring to their appointment at the Latino Task Force’s Essential Service Hub, at 701 Alabama St.

To be eligible for the state aid, renters must have incurred financial hardship due to COVID-19, prove that their housing situation is unstable, and their household incomes must be no greater than 80% of the area’s average. In San Francisco, a two-person household’s total income must be less than $111,550.

“It’s a lot of people in the hospitality industry, laid off back in March,” Velasco said. “A lot of members of the community, they cleaned houses for a living — or offices that are closed now,” referring to the Latino community.

Many people do not qualify for the state aid because they lack the proper documents proving tenancy. Velasco’s team has had to turn away renters who did not possess a written lease with their name on it — one of the state’s requirements.

And the state will only pay rent debts owed to the landlord — which means that tenants cannot be reimbursed if they borrowed money from family in order to keep from going into rent debt. Velasco has seen this situation multiple times, he said.

“Their cousin lent them money, and that’s how they paid the landlord,” he said. “If we ask the landlord how much they owe, then they don’t owe them anything. So they don’t qualify.”

Last week, more than a dozen community groups in San Francisco submitted a letter of grievances about the state rent-relief program to Geoffrey Ross, Deputy Director of the California Department of Housing and Community Development, which runs the program.

They demanded that the department improve the assistance hotline and the quality of translation for application materials in languages other than English, and provide a better paper application process as an alternative to the web-based process.

State staff were aware of the problems and fixes were in the works, said Russ Heimerich, spokesperson for the program.

As of Monday, the website for applicants featured new instructions in Spanish, Chinese and other languages besides English, rather than merely relying on Google Translate, which can be inaccurate. The assistance hotline also added options for non-English speakers, offering prompts in those languages.

“The application portal has been live for less than a month, and we have been constantly working to improve it,” Heimerich said via email.

‘I don’t have anything’

The rent-aid program is a crucial tool to prevent a potential wave of displacement in July, when California’s eviction protections is scheduled to expire.

San Francisco residents are slated to receive about $52 million in total financial aid for rent debts and utility bills through the state program. That may fall short of the total rent debt in the city, estimated between $81.3 million and $196.2 million, according to an October report by the San Francisco Budget and Legislative Analyst’s Office.

The looming eviction crisis threatens to dislodge long-time residents whose lives are woven into San Francisco’s DNA — people like Rodriguez, who has lived in the Mission District for 20 years and helped build one of the city’s most iconic structures.

He worked for six years on the new portion of the Bay Bridge as a general laborer — landscaping, directing traffic and pouring the massive concrete slabs that hundreds of thousands of cars now drive across daily.

The project broke his body. A shoulder injury left him unable to work, and he began receiving disability payments. It would be about a decade before he got his job as a security guard.

“Then I was out, when the pandemic came,” he said.

Two other tenants in his unit lost their restaurant jobs, and they moved out. That left Rodriguez and his 84-year-old mother covering the rent alone. Rodriguez began tapping into his savings to keep the roof over their heads. By September, he was out of money.

“I don’t have anything. But this is the way the cookie crumbles sometimes,” he said. If he doesn’t get money through the state, he’ll try to negotiate a repayment plan with his landlord and avoid eviction.

And if that doesn’t work?

“I’ll probably collect cans,” he said, in hopes that he can turn a profit recycling them.

“It’s the only money I can make,” he laughed. “It’s either that or sell drugs, and I’m too old for that! The young kids will come and kick me out.”