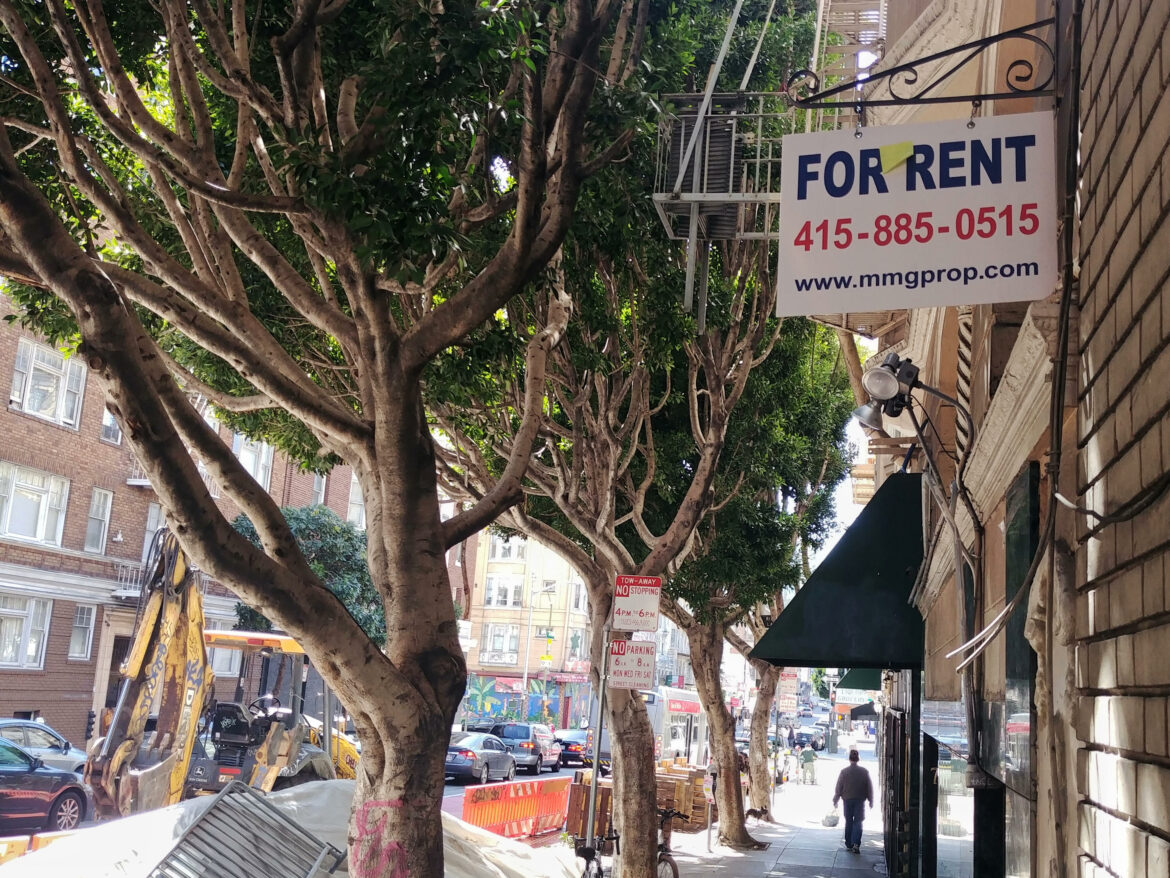 Many tenants have incurred huge rent debts to stay in their San Francisco apartments. Others have left the city, precipitating a large number of rental signs in areas like the Tenderloin.

San Francisco residents who are behind on their rent and other housing costs could soon get financial relief, thanks to government programs designed to help those who qualify.

To get assistance as quickly as possible, San Franciscans should apply now through California’s program to distribute federal stimulus money, which opened in March, said Geoffrey Ross, deputy director for federal financial assistance at the California Department of Housing and Community Development.

The city is developing its own program, which will dovetail with the state’s by providing assistance where its counterpart does not, but it isn’t slated to open until May, the San Francisco Chronicle reported.

Once the local program is live, the state will “be able to seamlessly migrate folks who should go to the city program,” Ross said, and City Hall will likewise share applicant information when appropriate. People are expected to get the same assistance regardless of where they apply.

To apply, go to the state’s web portal and select whether you’re a landlord or renter. After specifying where you live and answering basic questions about your situation, you can register with the state’s program and then fill out the online application.

To be eligible, renters must have incurred financial hardship due to COVID-19 and show that their housing situation is unstable — for example, that they lapsed on rent or utility payments or received an eviction notice.

State lawmakers created the housing-assistance program through the January passage of Senate Bill 91, which extended eviction protections and specified how California would spend its share of $2.6 billion in federal stimulus money.

State law grants eviction protections to tenants who declare to their landlords — on forms their landlords must provide — that they cannot pay rent due to financial hardship from COVID-19. Those tenants can never be evicted for unpaid rents that were due from March 1, 2020, to August 31, 2020. However, for unpaid rents due from Sept. 1, 2020, to June 30, 2021, they can face eviction if they have not paid at least 25% of what was due by the end of that period.

San Francisco law protects tenants from eviction for nonpayment, regardless of whether they have paid any of their rent debt, through the end of September 2020. That gives these renters an extra month of protection beyond what the state offers.

Landlords can attempt to claim rent debts in small claims court beginning Aug. 1, 2021. Plaintiffs there can generally sue for no more than $10,000, but SB 91 lifted the restriction for these cases, so landlords can pursue any amount.

Grants from the rent-relief program will pay a landlord up to 80% of the rent debts owed to them, as long as the landlord forgives the remainder. If a landlord is not amenable to this tradeoff, then their tenant can independently apply for 25% of the rent they owed between April 1, 2020, and March 31, 2021.

“The power imbalance between tenants and landlords is troubling,” said Assemblyman David Chiu, who represents California’s District 17, in the lead-up to SB 91’s passage. “The amount of rental assistance a tenant receives is determined solely by the cooperation of their landlord. I expect there will be a need to revisit this legislation to address gaps and provide relief to additional tenants.”

The program will also help people cover their utility bills for those months, including for water, gas and trash collection.

San Francisco has $23.6 million to distribute in financial aid, and the state is poised to pass city residents an additional $28.6 million in federal dollars, according to documents from the Department of Housing and Community Development.

At just over $52 million, the aid may fall short of San Francisco’s need. City renters had accrued a combined debt of between $81.3 million and $196.2 million since the start of the pandemic, an October report by the San Francisco Budget and Legislative Analyst’s Office estimated.

San Francisco is one of 16 California cities and counties that chose to design their own local housing-assistance programs rather than replicate the state’s. To prevent duplicative grants to tenants and landlords — this would violate federal rules — the two levels of government must coordinate over which types of assistance each will cover before they give out money. For example, one level might cover all rent payments, while the other covers all utilities.

Because the state program is already up and running, it could begin giving money to the city’s residents before the local program. Grants for the types of financial assistance that fell under the city’s purview would be on hold until its program began.

Though this complexity affects exactly when people will receive certain types of assistance, it does not affect the application process, Ross said. People should merely describe what they need, with as much documentation as possible.

Many applicants are low income

The state program received more than 71,000 applications in its first week, which began March 15, said Russ Heimerich, a spokesperson for the California Business, Consumer Services and Housing Agency. The requests totaled $160 million.

In “the bulk” of those applications tenants earned no more than 30% of the average income for where they live, Heimerich said, which illustrates the severity of the crisis.

“They’re the ones who need it the worst,” Heimerich said. “So those people, we’re going to go ahead and move through” the process and give them the money now.

The state will wait before giving grants to applicants it considers less vulnerable, he said.