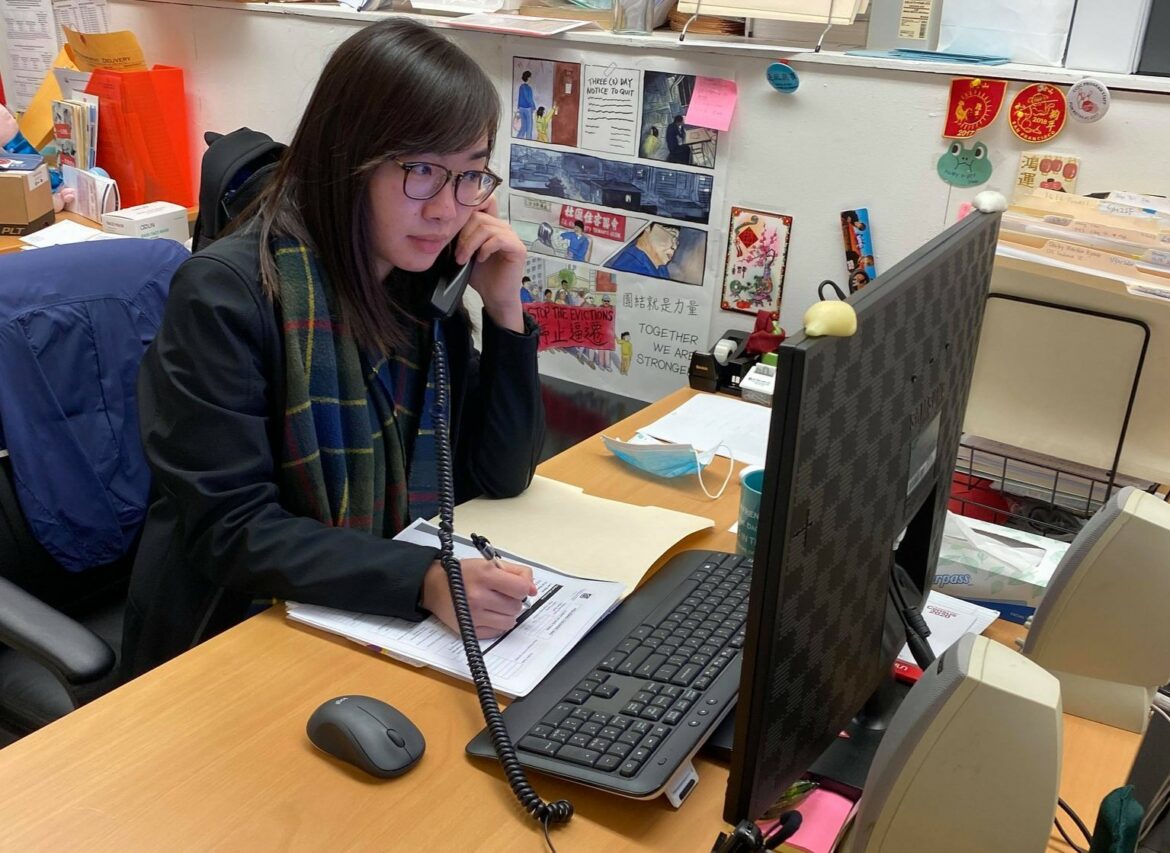 Rita Lui, housing counselor at the Chinatown Community Development Center, has helped applicants overcome barriers to apply for rent and utility assistance through the state’s program, which opened March 15.

California’s program to alleviate rent debts — and prevent a wave of evictions in July — makes it tough for some of the state’s most vulnerable residents to request financial aid, community groups in San Francisco say.

The way the system is designed prevents many people from applying, including those who live in informal housing arrangements, those who do not speak English and those who lack digital proficiency, according to staff at local organizations helping tenants and landlords file applications. The groups are scheduled to hold a press conference at noon today to share their grievances about the rent-relief program.

“The system itself is not helping them,” said Rita Lui, housing counselor at the Chinatown Community Development Center. “It’s discouraging them.”

Lui and others recounted stories of their Asian and Latino clients, many of them low-income workers who have accumulated crippling rent debt. Some have decided to leave San Francisco now rather than wait until the state’s eviction protections lift in July.

“A lot of the people who lost their jobs work in service industries, like restaurants or hotels,” Lui said. “When you don’t speak English, there’s not a lot of work you can do.” More than half the people working in the local leisure and hospitality industry, which includes bars, restaurants and hotels, lost their jobs at the start of the pandemic — the workforce in the San Francisco Metropolitan Area, which includes San Mateo County, fell from 139,000 in March last year to 62,900 people the following month.

“They go back to Mexico,” said Dairo Romero, community initiatives manager at the Mission Economic Development Agency, referring to tenants who were struggling with housing costs. “They came here to just work hard and go back to their country; they don’t want to have $10,000 in debt.”

The state’s program, which opened March 15, partially reimburses selected landlords for the rent debts tenants have not paid because of COVID-19 hardships. It also reimburses tenants for their utility costs.

Applicants must upload documentation proving their housing situations for the state’s web portal to accept their applications. This is the source of much of the trouble, housing counselors say.

“The big problem with San Francisco and for the Latino population is that the state doesn’t consider the subtenants,” Romero said. “If they are a subtenant, they cannot apply.”

Romero said the subtenant has to persuade the master tenant to apply for the state aid on their behalf. He is helping his clients initiate those conversations.

Other people who lack leases include those living in some unpermitted accessory dwelling units, known as “granny flats” or in-law units, Lui said. Her clients have had trouble applying for utility reimbursements through the state program, which requires the tenant’s name be on the bill.

“In an illegal basement unit, the landlord lives upstairs and the tenant lives downstairs. So of course the bill is in the landlord’s name,” Lui said.

Romero said landlords in some informal housing arrangements have refused to apply for the state funds. They would rather lose money than tell the government they earned rental income, out of fear that they’ll draw attention from the Internal Revenue Service.

Russ Heimerich, a spokesman for the state’s rent-relief program, said that people in some informal housing situations might qualify for the program. “We’re examining those on a case-by-case basis and working with such applicants,” he said.

Many of Lui’s clients speak Chinese and little or no English.

When her clients first encountered the state website’s instructions page, they met a wall of indecipherable English, Lui said. A button in the web browser’s upper-right corner let them use Google Translate to convert the page to Chinese. But Lui said the translation made the instructions harder to understand.

“When I read the Chinese translation, I got confused,” Lui said. “I don’t know what they’re asking me to provide.”

For example, there was a button that, in English, invited the “returning applicant” to resume an application from a previous web session. “In Chinese, it’s ‘returning to your country applicant,’” Lui said, which doesn’t make sense.

To register and begin the application process, users must select where they live in the state. But this registration page does not have a Google Translate button.

Lui tried calling the assistance hotline provided on the website. The automated voice gave directions in English — including the prompt to press a particular number on the keypad to receive instructions in Cantonese.

“The program has so many defects, in terms of language access,” Lui said. “It’s challenging. We try to overcome, but I think they can do a better job in designing the program so that more tenants are encouraged to apply.”

No email address? No financial aid.

Lui and Romero both said the program is difficult for people who aren’t comfortable with technology.

Applicants need to know how to use email. “That is a problem for seniors or people who don’t check the emails,” Romero said.

“If the landlord applies, tenants will get notified. But tenants who don’t have an email address, they won’t get notified,” Lui said. Even after she and her colleagues set up email accounts for their clients, the application process stalls if people don’t monitor their email.

Landlords and tenants also must provide digital copies of all documents, which can require scanning paper files and then locating them on a computer’s hard drive for upload to the web — a complex procedure for people who don’t stare at a screen for a living.

Prior to the press conference, the groups sent a letter of grievances and requests to modify the program to Geoffrey Ross, deputy director of the California Department of Housing and Community Development.

“Tens of thousands of tenants in San Francisco are presently facing a looming threat of eviction because of severe financial hardship as a result of the COVID 19 crisis,” they wrote in the letter. “Fair, equitable, and barrier free access to the state’s rental assistance program is therefore essential to prevent evictions not only in our city but across the state.”

The groups said that “more than a dozen elements” of the application process were problematic. They demanded that the state professionally translate all instructions and application materials, improve the assistance hotline and provide a better process for people to apply with paper documents.

Heimerich, the spokesman for the state’s rent-relief program, said he could not comment on the groups’ demands because he had not yet seen their letter.

“We’ve been working with stakeholder groups to learn where the weaknesses are in the system,” Heimerich said, adding that the state’s primary goal had been to get the program up and running.

“We’ve only been up since March 15, and we expect we’ll make additional changes as we hear from stakeholders,” he said.