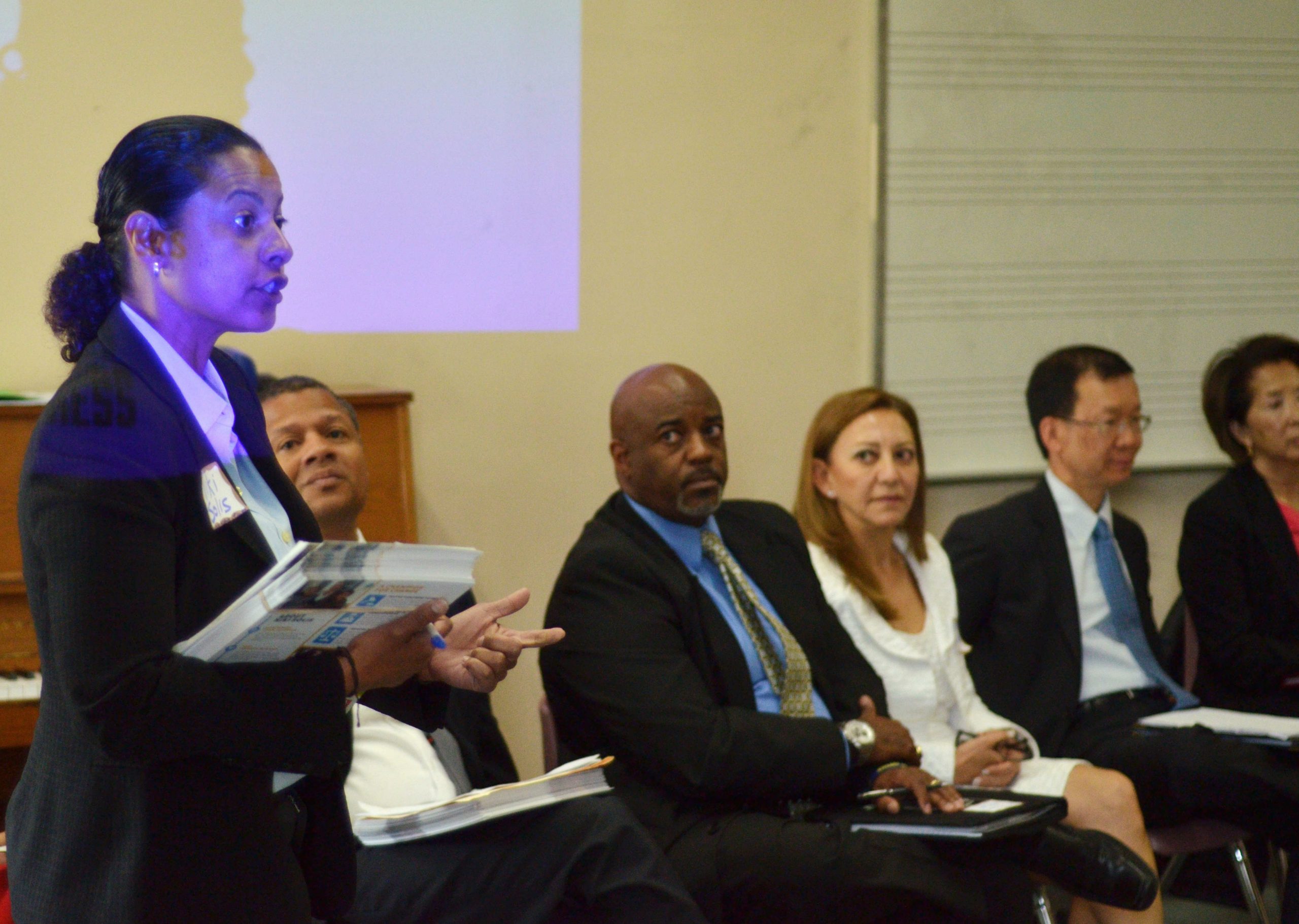 When Niki Solis addressed the audience at the May 5 candidate forum on African-American issues, she did so peripatetically, striding about like the trial attorney she is. The head attorney at the San Francisco Public Defender’s office was on the offensive, laser-focused on her jury — voters. And the case she was making was her own.

Solis is one of four public defenders — all men and women of color — running to unseat four state Superior Court judges. Again and again, they told the audience of several dozen at the “Facing the Voters” forum that they were out to fix a broken system in which minorities are disproportionately targeted and given longer sentences. African-Americans make up less than 6 percent of San Francisco’s population but occupy 55 percent of county jail cells. The challengers portrayed the incumbents — all GOP appointees, though none are registered Republicans — as vestiges of this system.

“My kids, because of what we look like, are 10 times more likely to be convicted of a crime,” said Solis, who is pitted against nine-year-veteran Judge Jeffrey Ross, a Gov. Arnold Schwarzenegger appointee.

“My African-American kids are seven times more likely to be arrested,” added another public defender, Kwixuan Maloof, who is running against Judge Cynthia Ming-mei Lee, the first Asian-American woman presiding judge in San Francisco and a Pete Wilson appointee. Maria Evangelista, a felony trial attorney who is challenging Judge Curtis Karnow, said that “members of our own communities should be the arbiters of our freedom.” Elizabeth Zareh, a temporary Superior Court judge and Assessment Appeals Board commissioner, is also running for this seat. The Tehran-born attorney said that, if elected, she would be the court’s first Muslim judge.

‘Remember what judges can and cannot do’

“We need to fix this system, and these people are, unfortunately, part of that system,” said public defender Phoenix Streets. He is challenging Judge Andrew Cheng, a 2009 Schwarzenegger appointee who received notoriety last year with a record-breaking damage award against notorious city landlord Anne Kihagi. (That earned him an endorsement from the left-leaning San Francisco Tenants Union.)

For Karnow in particular, it all became too much.

“With respect to issues affecting the African-American community in a legal context, remember what judges can and cannot do,” said Karnow, who wrote the law-journal article that became the basis for opposition to the money-bail system and who developed and teaches the court’s implicit-bias program. He did not appear to relish being portrayed as the avatar of institutional racism.

“Judges are not in charge of policing policy and who gets arrested and who doesn’t get arrested,” said Karnow. “If that is your concern, you need to become a politician and address the issues.”

Karnow, who gained public prominence by ruling against the state accrediting body that was attempting to shutter City College, ridiculed the notion that judges could, of their own volition, just stop instituting bail.

“It doesn’t work that way. You need to have a motion. You need to have somebody” file a lawsuit, he said, glancing across the room at his adversaries. “Maybe it should have been one of you, a long time ago, to bring a case. It never happened. Finally it did, and we are making progress.”

Rare to Have Challengers

After being appointed by the governor, Superior Court judges, who hear criminal, civil and family cases, must subsequently run to hold on to their seats for six more years. But, barring negligence, wrongdoing or unpopular rulings, it is unusual for a sitting judge to face an electoral challenge — and rarer that he or she is defeated — let alone a challenge as organized as the one mounted by the quartet from the Public Defender’s Office. In response, the incumbents have united as a slate to keep their seats.

Unlike the forum’s opening session on the mayor’s race (Board of Supervisors President London Breed skipped it, and former state senator Mark Leno and District 6 Supervisor Jane Kim sent proxies) or the congressional debate that followed (Rep. Nancy Pelosi deployed an aide as her surrogate), all of the judicial candidates showed up on a Saturday morning to plead their cases to voters. It was the most compelling, taut, and adversarial section of the day’s program at the Kanbar Performing Arts Center, which was organized by African-American community groups and hosted and moderated by the Public Press. (See “Candidates Say How They Would Help African-American Community”)

Cheng questioned the wisdom of running against judges who are “impartial and fair and doing a good job.” This, he claimed, could lead judges to “check the political winds before they rule.” In a more conservative part of the country, he noted, this would lead to more conservative rulings — which, presumably, San Franciscans would be displeased with and feel is a politicization of the judiciary.

“We have a constitutional right to elect judges,” Streets said flatly. “Judicial seats are political seats. So we’re not injecting anything that’s not already there. Is it political to point out African-Americans are arrested at higher rates? Is it political to say that African-Americans have to wait in custody longer for resolution or are handed out longer sentences? Those are facts. That’s why I’m running.”

‘Politics Has Been Injected Here’

Karnow, again, objected. “They are saying we have Republican values because we were appointed by Republican governors,” said Karnow, who was placed on the bench by Schwarzenegger in 2005 and ran unopposed in 2012. “I am a lifelong Democrat. We have the endorsements of the Democratic County Central Committee and all the leading Democratic institutions. The suggestion is false, and they have been called out for trying to politicize this.” Added Lee, “When I was appointed 20 years ago, I’d never met Pete Wilson. And I’ve never met him since. This is political only in the sense that politics has been injected here.”

The disagreements were sharp, though, with one exception, the actual performances of the sitting judges did not come up in the discussion. The sole instance was when Maloof noted that Ross put away one of his clients for 25 years to life, a sentence that was later overturned on appeal. No one went into further detail about that case.

Cheng stuck up for his colleague: “Implicit bias is about people who don’t see. These judges see people. Especially Judge Ross.” Ross noted that he was the judge who tossed out felony charges in a recent incident in which two police officers charged at and shot a mentally ill black man standing on his front steps — a ruling, Ross noted, that did survive on appeal.

The Bar Association of San Francisco ranked Karnow, Lee and Cheng “exceptionally well-qualified,” its highest rating. Ross was deemed “well-qualified.” Challengers Evangelista and Solis were also ranked “well-qualified.” Maloof was rated “qualified,” and Zareh “not qualified” — a slight she complained was due to her “ethnicity and country of origin,” Iran. The bar deemed Streets “not recommended for appointment or election at this time.”

In the end, the only point of accord may have been the most fundamental one: Regardless of how anyone feels about it, the choice of who will be a judge and who will not rests with one body.

“Here’s the beauty of it,” Solis told the audience. “As voters, you get to decide who your judges will be. It’s up to you.”