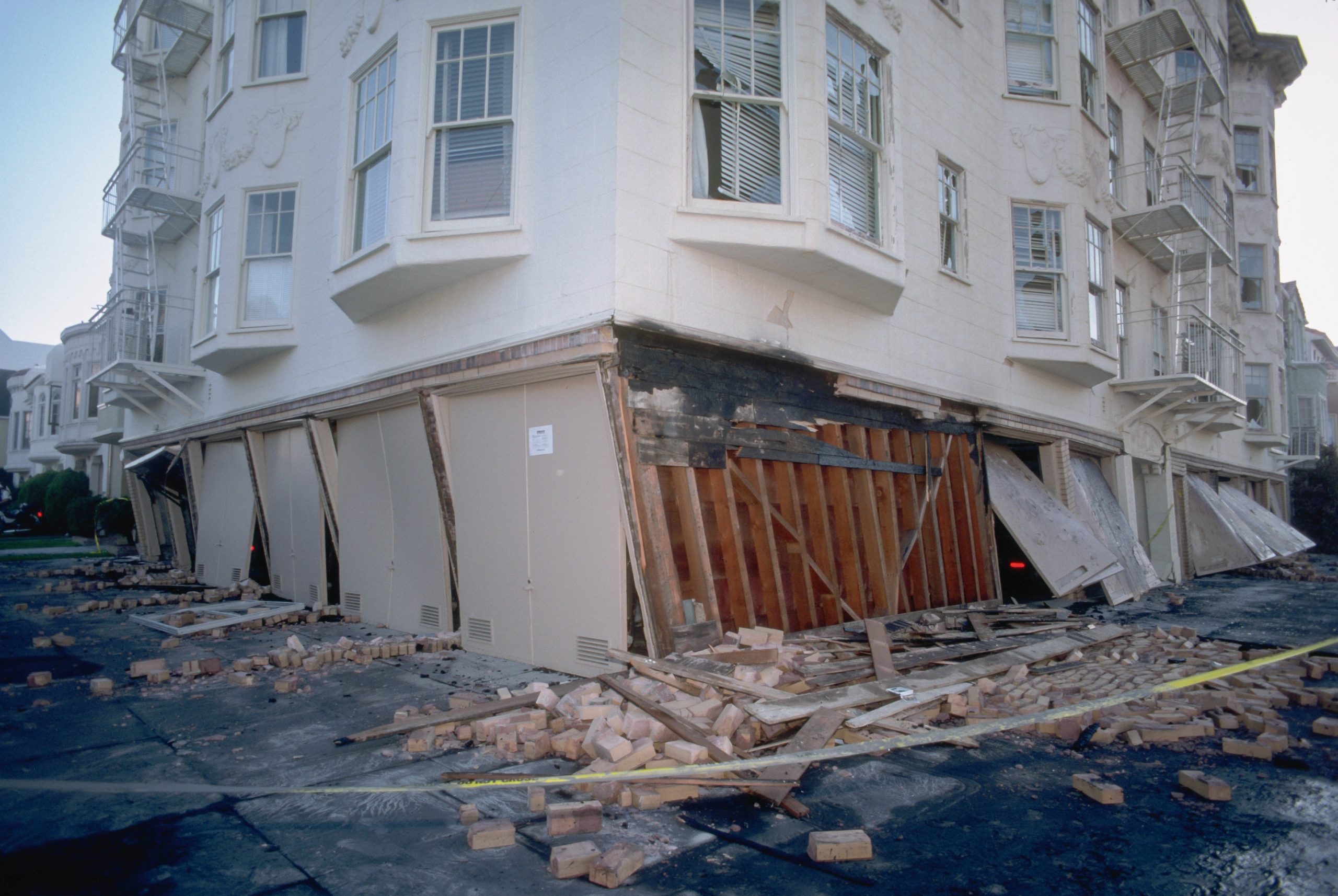 A collapsed facade of a soft-story building near Beach and Divisadero streets in San Francisco, damaged by the 1989 Loma Prieta earthquake. Photo by J.K. Nakata, United States Geological Survey.

UPDATE 12/17/2021 3:15 p.m. Scroll to the end of this article to find a list of buildings that are overdue for completing retrofits.

Following April revelations that poorly executed seismic retrofits could cause dangerous gas leaks after an earthquake at an unknown number of residences, officials said Wednesday that a subsequent audit found only 75 buildings faced that risk.

That’s just a handful of the 5,000 soft-story buildings, each with at least five dwelling units, that the city has required to be strengthened because their ground floors are vulnerable to collapse in a quake. Meanwhile, though the majority of buildings have been retrofitted, work is overdue at more than 700 properties, potentially endangering thousands of residents in a temblor.

The 75 identified buildings, which may have gas lines encased in concrete foundations without protective sleeves, would likely either be fixed or confirmed not to pose a safety risk by the end of 2022, said city and PG&E staffers. City representatives and PG&E staff members explained these requirements at Wednesday’s meeting of the Building Inspection Commission, which oversees the Department of Building Inspection. The findings landed with little fanfare — in stark contrast to the uproar that led to this moment. Mission Local broke the story about the gas lines in two April reports that spurred the Board of Supervisors to openly grill the building department staff and request the audit.

Mission Local later reported that some plumbing and gas experts were critical of the building department’s audit methodology. It was premature to call the thousands of buildings safe without first inspecting them, they said.

Only one commissioner, J.R. Eppler, asked about the retrofit program’s overall success. Sept. 15 was the deadline to finish the retrofits, and Eppler noted that work was not complete at 16% of soft-story buildings.

“What are the steps being undertaken in order to ensure that they very, very promptly become compliant?” Eppler asked the building department’s policy director, Jeff Buckley.

“We can come back to you as a commission and kind of talk about the enforcement process on a kind of go-forward basis, if that’s something that you would like,” Buckley said.

Department spokesperson Patrick Hannan said it would take weeks to compile a list of retrofit cases which the department had subjected to the city’s various enforcement mechanisms. These include notices of violation, financial penalties, summoning the owner to a hearing, abatement orders that limit what business activity can take place at the building, placing a lien on the property and suing the owner.

The timelines for the retrofits and for enforcement have been staggered by tiers, with the buildings that pose the greatest risks coming first. All Tier 1 buildings, which can contain schools and care facilities, have been retrofitted. Eighty-nine percent of Tier 2 buildings, which have at least 15 dwelling units, have been retrofitted. Tier 3 includes all other buildings aside from those with businesses or in liquefaction zones, which are subject to extreme shaking during a quake. Retrofits are finished at 87% of Tier 3 buildings, and 72% of the remaining ones, which constitute Tier 4.

The riskier tiers have better compliance in part because, with their earlier deadlines, the Department of Building Inspection has spent more time enforcing the mandate, Hannan said.

About 90% of Tier 4 buildings that overshot the program’s retrofit deadline have requested or obtained permits to do the work, city figures show. “And, as the permits are generally good for a year, they still have time to complete the work,” Hannan said, adding that after 12 months, “we’ll enforce on them and expect to see similar results over time that we’ve seen with the other tiers.”

Building department representatives have long been optimistic about getting building owners to do the work. In 2019, when about 1,200 buildings were out of compliance, the Public Press asked Bill Strawn, the department’s then-public relations chief, if the problems that led to that delinquency were intractable.

“I think hope always springs eternal, that human ingenuity never ceases to amaze me,” Strawn said. “So I would think that we should be able to figure this out.”

The following soft-story buildings are overdue for completing mandatory seismic retrofits as of Dec. 17, 2021. A building can fall into one of four retrofit tiers. Lower-tier buildings pose greater potential risk and faced earlier retrofit deadlines.