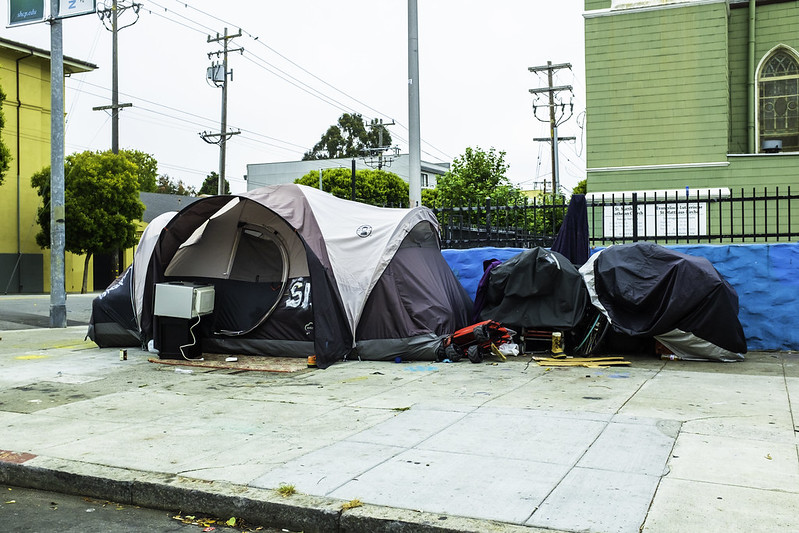 People living on the streets of San Francisco, like the residents of these tents, will have a higher likelihood of accessing housing due to a new ordinance.

More than 600 people living on San Francisco’s streets could soon get placed in permanent supportive housing.

The Board of Supervisors on Tuesday approved an emergency ordinance that lifts restrictions on who can access this type of shelter, which includes services like mental health and substance use treatment and employment assistance. Open units in the city’s permanent supportive housing stock were reserved by the Department of Homelessness and Supportive Housing for residents of the city’s shelter-in-place hotels, where homeless people who are at severe risk of COVID-19 have been sheltering since last March. People living outdoors who qualified for housing were unable to access it.

Housing providers for months have called for changes to the city’s limited housing access rules. The practice of forcing people living on the streets to wait in line behind those in shelter-in-place hotels “is the definition of inequitable,” said Sara Shortt, director of public policy at the Community Housing Partnership, a large permanent supportive housing provider. “I am grateful to hear that fairness in access to housing for the homeless will be restored.”

In addition to addressing equity concerns, the ordinance may also prompt some shrinkage in the number of vacancies in the city’s permanent supportive housing stock. The city set a goal of not having more than 3% of its units vacant, but in February, that number reached 9.9%. In all, 766 units, or 1 in 10, sat empty, a 58% increase from September.

Abigail Stewart Kahn, interim director of the Department of Homelessness and Supportive Housing, said a contributing factor to the high vacancy rate is a reluctance from people living in shelter-in-place hotels to transition into units that they have to pay for, and that often don’t have the same amenities or privacy as a hotel.

However, demand for those units has not waned among people who live outdoors, she said: “People who are not in shelter-in-place hotels are more eager to take permanent supportive housing placements.”

The Board of Supervisors has repeatedly called on the mayor’s office and the Department of Homelessness to fill the hotels to capacity, even passing legislation to that effect, but their requests were ignored over concerns about cost. That changed in January, when the Federal Emergency Management Agency pledged to not only fully fund all hotel costs through September 2021, but also to refund cities for costs dating back to the beginning of the pandemic. Previously, FEMA only contributed 75% of the costs for the hotels.

The ordinance is in effect for the next 60 days, but Supervisor Matt Haney said he plans to draft a permanent piece of legislation in the next two months to address the shelter-in-place hotels and their pending closure once funding from FEMA ends in September.