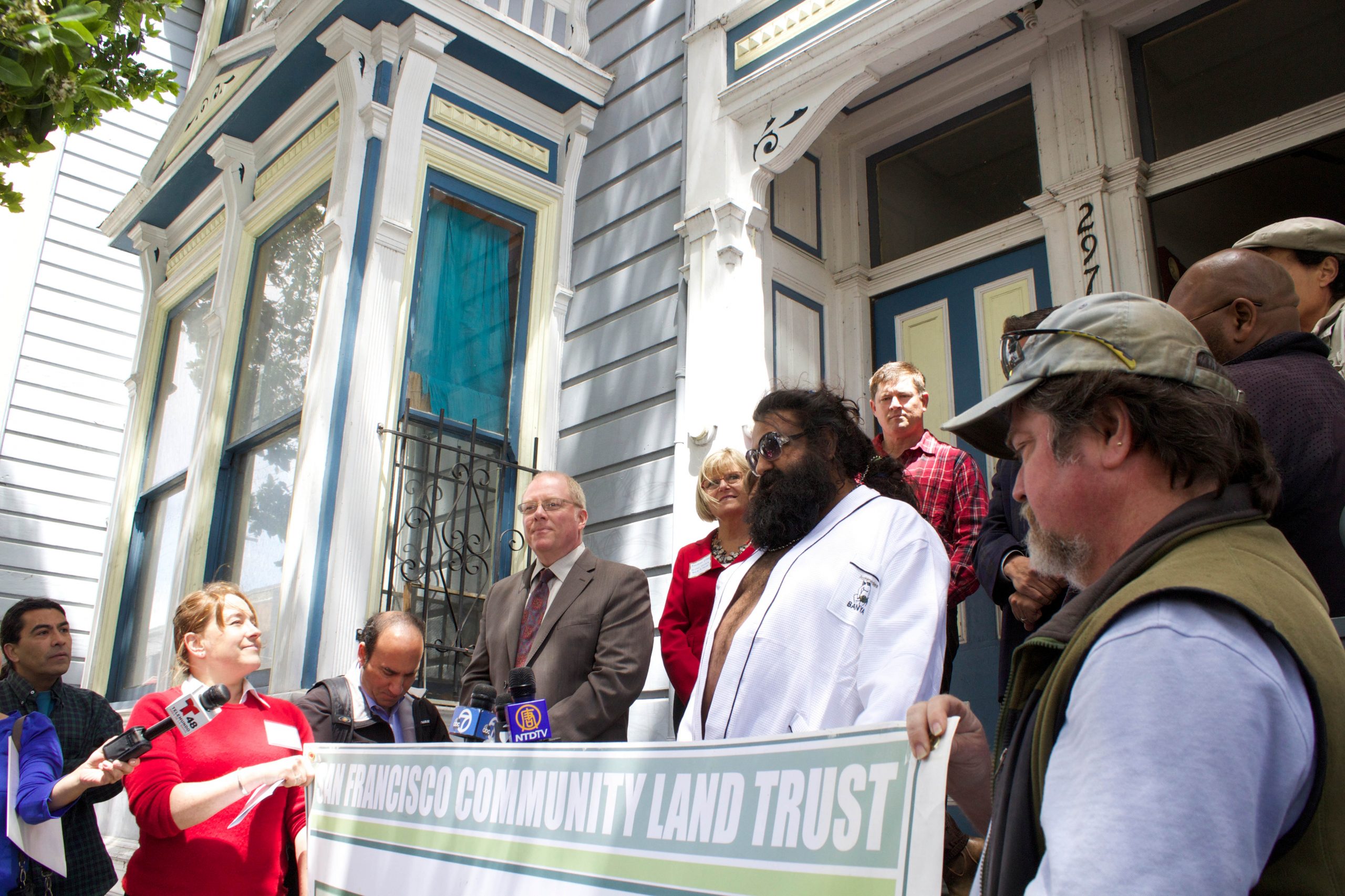 Groups like community land trusts would get the chance to bid on residential properties before they hit the market if a new bill passes in Sacramento. The San Francisco Community Land Trust has established affordable housing in multiple buildings throughout the city, such as 2976 23rd Street, shown here during a 2014 event celebrating its purchase. Photo by Robin Ngai / Public Press

Part of a special report on solutions for housing affordability in San Francisco. Look for a version of this story to appear in the upcoming fall 2014 print edition.

If nonprofit organizations in San Francisco had an easier time acquiring residential properties and turning them into housing cooperatives, advocates say it could keep rents down for thousands of tenants. It may sound like a pipe dream, but the widespread co-op housing network in New York shows that it is possible in big cities.

Co-op housing organizers have been pushing the idea for years. They are building a small but growing movement for “community land trusts,” which purchase apartment buildings to keep rents low, out of the fluctuating speculative housing market.

Though they are difficult to keep track of, cooperatives still seem to be a fringe phenomenon in San Francisco. They number about 2,000 apartments, according to one unofficial tally.

If the average household size is typical for the city, those residents would make up less than 1 percent of the city’s population. Compare that with New York City, where a single government program is responsible for housing, on a per capita basis, about three times as many people.

In both cities, co-ops come in many forms, with various ownership and management structures. Many are market-rate stock co-ops that resemble condominiums, but these offer little to those who seek refuge as housing costs skyrocket.

In San Francisco, a different form of ownership is slowly taking root. In the last 11 years, the San Francisco Community Land Trust has acquired five buildings, housing 70 tenants. They each pay less than 30 percent of their incomes on rent.

Now state and local officials are crafting laws that would make it easier for new co-ops to incorporate and get financing to buy property.

On Sept. 27, California Gov. Jerry Brown signed a law making it easier for tenants to form and run limited-equity co-ops, using money from state and federally chartered credit unions and other institutions.

Under the limited-equity ownership model, rent on an apartment does not increase more than 10 percent even when a tenant moves out. That is more tenant-friendly than San Francisco’s rent control law, which allows landlords to increase the monthly rent to any amount for new tenants. Limited-equity housing often is explicitly set up to provide long-term affordability for low- and medium-income households.

That reform might ultimately help tenants who face eviction through the Ellis Act. State law allows an owner to eject all of a building’s tenants if they aim to sell the property — an alluring option in today’s hyperinflated market.

Indeed, the San Francisco Community Land Trust has purchased all of its buildings in response to warnings that those tenants might soon get “Ellised.”

Co-op housing can be a boon for low-income residents. The hardest time to buy a building to create a co-op is when prices are high and the need for cheap housing is most extreme.

Private donors are fickle, Parent said, making it hard to predict how much buying power the land trust will have from one year to the next. “We can only use private sources that give short-term financing.”

That may explain why so few co-ops have succeeded recently. By Parent’s reckoning, only 2,107 housing units belong to co-ops, in 16 buildings that were mostly built before 1985.

For the most part, affordably priced nonprofit co-ops look like ordinary residential buildings. But residents say they create a greater sense of community.

In one five-story building in Chinatown, 36 residents live in small apartments in an unremarkable-looking building that appears to be just another business or apartment complex. (Visit our partner site Shareable for for more details on the Chinatown site.) The building, owned by the land trust, has a shared family room in the basement, with a television and space for group activities. Residents meet a few times a month to discuss living conditions and to socialize.

“The land trust has helped us a lot with figuring out the numbers and workings of our building,” said Michael Tam, president of the board of the Columbus United Co-op. “Really they have done us a big favor.”

Able to Scale Up

While San Francisco does not possess a comparable program that specifically targets co-ops, local policymakers have passed laws that could indirectly make it easier for co-ops to form.

The fund draws some of its money from city fees through the Inclusionary Housing Program, which developers must pay when they choose not to build affordable housing into large residential projects.

Parent, of the land trust, said the fund’s focus is on apartments that landlords are trying to force tenants out of in order to increase rents to market rate.

Lee said in August that the fund creates more affordable living options and “offers a way to create certainty for our longtime San Francisco families and rent-controlled households.”

In addition, Board of Supervisors president David Chiu succeeded in passing a law giving tenants the first chance to purchase their buildings at fair-market value whenever the whole property is put up for sale.

Part of a special report on solutions for housing affordability in San Francisco. Look for a version of this story to appear in the upcoming fall 2014 print edition.

Robin Ngai is a reporting intern for the Public Press. She studies journalism at Boston University, where she has worked at The Daily Free Press, an independent student newspaper. She has also written articles and opinion pieces for The Beat, a biweekly magazine, and blogged for music websites. She has an abiding interest in the power of blogging and social media.

Emily Mibach is a reporting intern for the Public Press. She studies English literature and journalism at Mills College, where she is currently managing editor at The Campanil. She has written for the Davis Enterprise, as well as the Natomas Buzz in Sacramento, California.