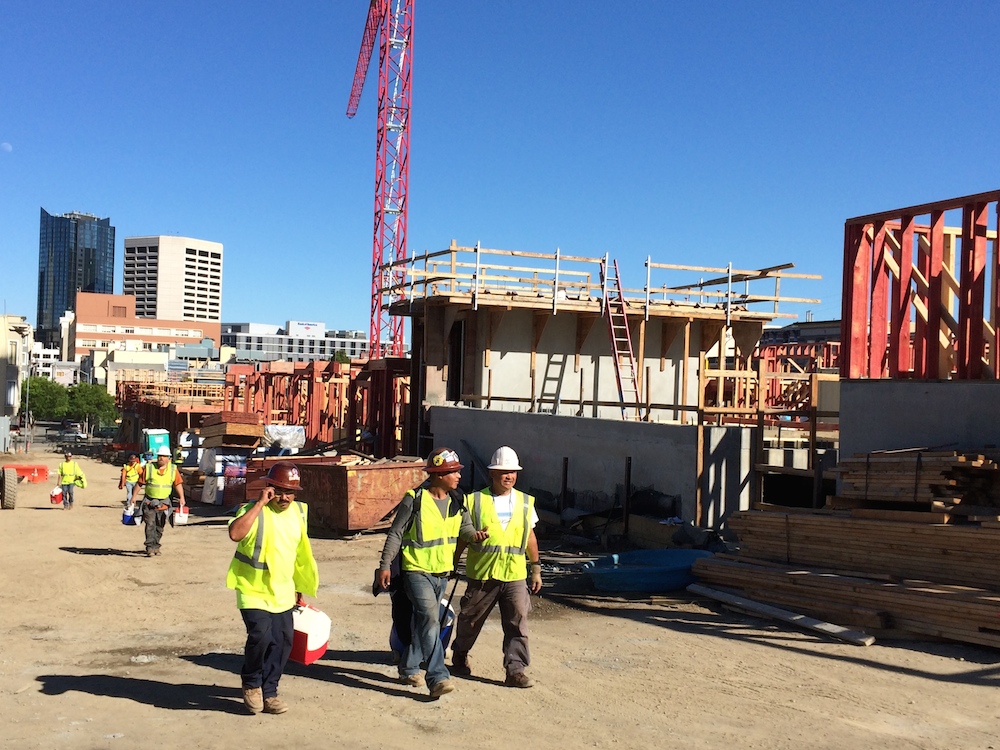 Affordable construction is stalled on at least 14 parcels for lack of funding. On a city-size block in Hayes Valley, a market-rate development rises next to a vacant lot owned by a nonprofit developer. Photo by Michael Stoll / San Francisco Public Press.

Nonprofit housing developers across San Francisco say they have been waiting for two years to begin building more than 800 permanently affordable housing units on at least 11 vacant parcels of prime city land. All that is missing is an infusion of public financing.

Success at the ballot box in passing affordable-housing measures could secure the hundreds of millions of dollars needed to restart the city’s stalled below-market projects — and launch even more.

In 2004, the Mayor’s Office of Housing estimated that it could help build an additional 3,350 affordable units if voters approved a bond measure worth $200 million. But the measure narrowly failed to achieve the necessary two-thirds of the vote.

Election-year compromises, political challenges and hidden costs remain obstructions to funding any housing mandates soon. While some housing-policy advocates say that voters they surveyed are now positively disposed to creating such a fund, San Francisco politicians have other priorities. This year, it is getting the trains to run on time.

In May, Mayor Ed Lee put a $500 million public transportation bond measure on the November 2014 ballot, with unanimous support from the Board of Supervisors. That money would pay for new Muni vehicles, repaved streets, widened sidewalks and bikeways, and other infrastructure upgrades.

Local housing advocates worried that voters might not support both transportation and housing at once, said Tim Colen, executive director of San Francisco Housing Action Coalition. So they decided to shelve the housing idea until next year.

Yet the idea of a San Francisco affordable housing bond may not be dead yet. The San Francisco Business Times quoted Board of Supervisors President David Chiu saying that such a ballot-box push was possible, but not yet politically tenable. “Many of the stakeholders involved understand that if we go forward this way, we’re looking at an incredibly divisive and expensive campaign that won’t actually build any housing,” Chiu said.

The pace of housing construction on a city block between Oak and Fell streets, off Octavia Boulevard, vividly demonstrates the difference between for-profit and nonprofit developments.

On the north side of this former community garden, a slightly smaller parcel of land slated as housing for families below 50 percent of the area median income remains a fenced-off slab of rebar.

In 2000, San Francisco acquired both parcels, for decades the on-ramp to the Central Freeway, and later sold the south parcel to market-rate developer. The city also approved 79 units of low-income housing in the north parcel, to be built by an affordable housing developer once the city had enough funds to put the development up to bid.

The city promised to release a request for proposals two years ago, said Fernando Martí, co-director of the Council of Community Housing Organizations. He said city officials now tell him that bids for construction in Hayes Valley will not appear until 2018. He added that he knows of at least 10 other projects on hold, in the Mission, Chinatown, SoMa and the Bayview, which in total are projected to yield 881 affordable housing units.

Officials at the Mayor’s Office of Housing acknowledged that they put many projects on hold because of uncertainty over real estate and construction costs. But they predict they will be able to issue new grant opportunities in 2015.

The Tenderloin Neighborhood Development Corporation, a nonprofit housing organization, has two affordable family housing projects on hold because of lack of public subsidies, including 153 units at 168-186 Eddy St. and 80 units at Fifth and Howard streets.

This leaves the organization in “land-banking” mode — holding onto empty properties until it finds other ways to pay for their development, said Don Falk, the organization’s executive director.

The holding pattern for subsidized housing is frustrating for community activists who have worked for years to put low- and moderate-income developments on par with privately funded real estate projects.

“It’s not that the city refuses to give us funding,” Falk said, but rather a need that is too great compared with the funding available.

Mayor Ed Lee is proposing to spend $94 million on affordable housing in the next two fiscal years, but to get stalled projects by nonprofit developers moving again, the city will need to devote a lot more money. Just maintaining existing public-housing stock will cost hundreds of millions of dollars.

And over the next eight years, San Francisco will have to build 16,000 new affordable homes to keep up with expected need, according to the Association of Bay Area Governments.

San Francisco planners would not speculate on how much money would be needed to meet this benchmark. But local architect Mark Hogan calculated the construction cost for a typical San Francisco housing unit to be $469,800. Using that figure, it would take at least $7.7 billion to meet the projected need.

To fund his stopgap two-year housing plan, Mayor Lee plans to tap into the Housing Trust Fund, which was passed by voters in 2012 to rehabilitate existing housing and building new affordable units. Lee’s plan is to “borrow” $50 million from its projected future revenue of $1.5 billion total over 30 years. But that financial maneuver will mean the trust fund will be smaller in future years, because the extra money it gets now has to be paid back for other city priorities, said Leo Chyi, the mayor’s deputy budget director.

Olson Lee, director of the Mayor’s Office of Housing, affirmed in a San Francisco Business Times article last December that Proposition C, the 2012 ballot initiative that created the Housing Trust Fund, would have to pay for $270 million worth of improvements to low-income public housing.

“It may divert more Prop. C money to preservation rather than production — but we don’t have a choice,” he told the newspaper. “We need to save these units.”

The mayor said in early 2014 that he aimed to build or rehabilitate 30,000 units of housing within six years, with one-third of that designated as affordable. But by including existing public housing slated for rehabilitation, which adds no new homes to the city, the total count for new affordable homes comes in at about 6,000, the San Francisco Public Press reported in May.

“I never thought the Housing Trust Fund would be silver bullet,” said Tommi Avicolli Mecca, director of counseling programs at the Housing Rights Committee of San Francisco. “We needed to pass it, but I don’t feel like it’s going to produce a whole lot.”

The Housing Trust Fund was only a small step toward what the city needs, said Housing Action Coalition’s Colen: “We passed Prop. C, but it turned out to be a small drink with many straws coming out. We need more, and that’s where a housing bond would come in.”

Policymakers are still debating the best time to give voters another swing at a local housing bond. Supervisor Jane Kim said some affordable housing measure could end up on the ballot as soon as next year.

Would San Francisco voters in 2015 have the stomach for spending another $200 million to build several thousand affordable apartments?

Advocates say that based on past experience — and opinion polls — the current housing crisis could be the moment to make the case for new spending. And they cite several precedents.

San Francisco voters approved a similar $100 million bond for affordable housing in 1996. That money funded the construction of 2,125 affordable units, according to a study by the Local Initiatives Support Corporation, a San Francisco-based national nonprofit organization that helps cities get financing for housing and community development.

And the failed $200 million housing bond in 2004 was actually enormously popular, getting 64 percent of the vote, just shy of the 66.7 percent supermajority support that it needed under California budgeting law.

The time left before November is not enough to garner that level of support for a city housing bond, said Cynthia Parker, president and CEO of Bridge Housing, one of the largest affordable housing developers in the country. Instead, Bridge is working with other organizations to put a bond on the ballot in all nine Bay Area counties in 2016.

“We think it’s great that Prop. C passed” in San Francisco, said Michael Lane, policy director at the Non-Profit Housing Association of Northern California. “But we need a regional approach for jobs and housing.”

Called the Bay Area Quality of Life Initiative, the regional bond would spend $750 million annually on affordable housing and public transportation projects in all Bay Area counties that approve it. The bond’s architects said they had yet to map out how much money each county would get, through grants from regional agencies such as the Association of Bay Area Governments.

The advocates said they conducted a private poll in which 70 percent of Bay Area residents cited housing as the most critical issue facing the region. Lane said the initiative had a good chance of passing because of the high voter turnout anticipated in 2016, a presidential election year.

The regional bond could help close a funding gap left by the 2011 dissolution of the city’s Redevelopment Agency, which previously funded local affordable housing projects, insofar as the Housing Trust Fund has fallen short of that goal.

Randy Shaw, executive director of the Tenderloin Housing Clinic, wrote an editorial in the local political blog BeyondChron in February that something big needed to happen to get stalled affordable housing projects moving.

“Absent a housing bond,” Shaw wrote, “we will continue to see nonprofit housing groups owning vacant parcels waiting for the money to build.”