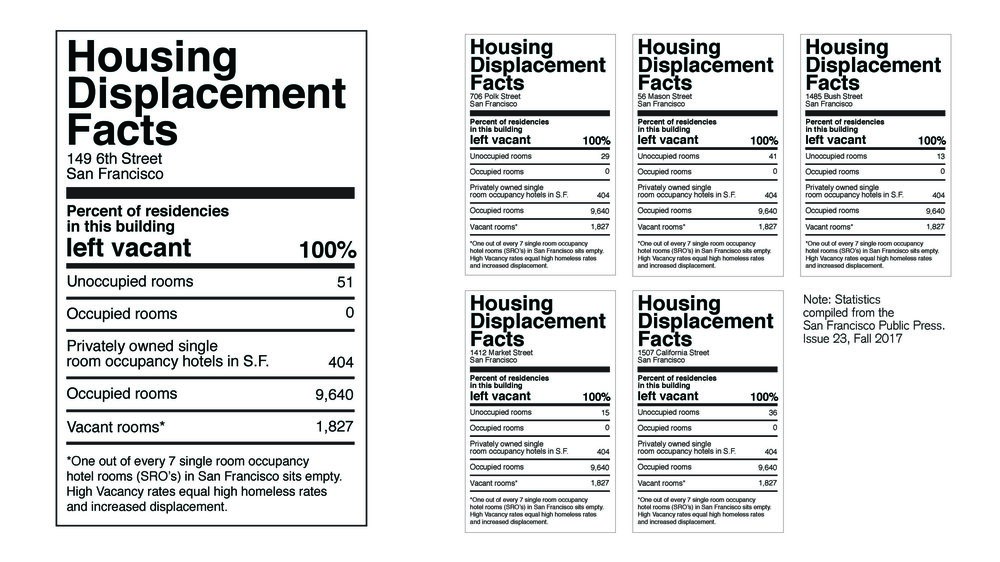 Graphic designer Erik Schmitt used findings about vacancies in single-room occupancy hotels in the fall 2017 issue of the Public Press to create these stickers, which he posted on the locations. All images by Erik Schmitt, Studio1500

For graphic designer Erik Schmitt, the fall 2017 issue of the Public Press was news he could use.

As a fellow at the Yerba Buena Center for the Arts, he was undertaking the monumental task of “finding and empowering truth.” Schmitt was pondering this tall order when inspiration fell into his lap.

In that issue, which focused on potential solutions to homelessness, your humble narrator penned an article titled “No Vacancy For the Homeless,” regarding the high number of residential hotel rooms in San Francisco that sit empty while thousands of people remain unsheltered. Data revealed some of the most sparsely inhabited hotels in the city, including a handful that were completely empty. For decades, these hotels provided affordable housing for workers, pensioners and the poor.

That resonated with Schmitt, a partner and creative director at Studio1500 and a past Webby award winner. For his art “intervention,” he designed and printed up half a dozen labels resembling the nutritional information on any box or package of food and headed off into the city. But instead of listing vitamins or calories or fat, these labels cited “Housing Displacement Facts,” such as “unoccupied rooms” and percentages “left vacant.” In each of the six buildings selected, the vacancy was 100 percent.

Some were boarded up and seemingly forgotten. But not all. The former New Pacific Hotel at 706 Polk, which Department of Building Inspection statistics had for years indicated was a vacant, 29-room residential hotel, has been reborn as the Hotel Epik, Tboutique establishment boasts “complimentary high-speed WIFI, bottled water, snacks, Nespresso coffeemaker, a safe, luxury bath products courtesy of Temple Spa.”

Over at 1485 Bush St., which Building Inspection had categorized until recently as an empty, 13-room single-room occupancy hotel, you’ll now find the Calista, which bills itself as an “organic hotel.” Its website emphasizes “organic products and processes” aimed at global jet-setters who “value authenticity.”

Schmitt wandered past transients and delivery people and construction workers to post his labels. He figures they didn’t stay up very long, but hopes they caught some eyes while they were around.

“I didn’t want to present an art project to a roomful of artists and people who like art,” he explained. “I wanted to put something out in the world. And if people see it, who knows? Maybe it’ll spark something. Maybe they’ll think differently. It opens your mind to the larger issue of just needing more physical space. It’s just one problem of many. But it’s a big one.”