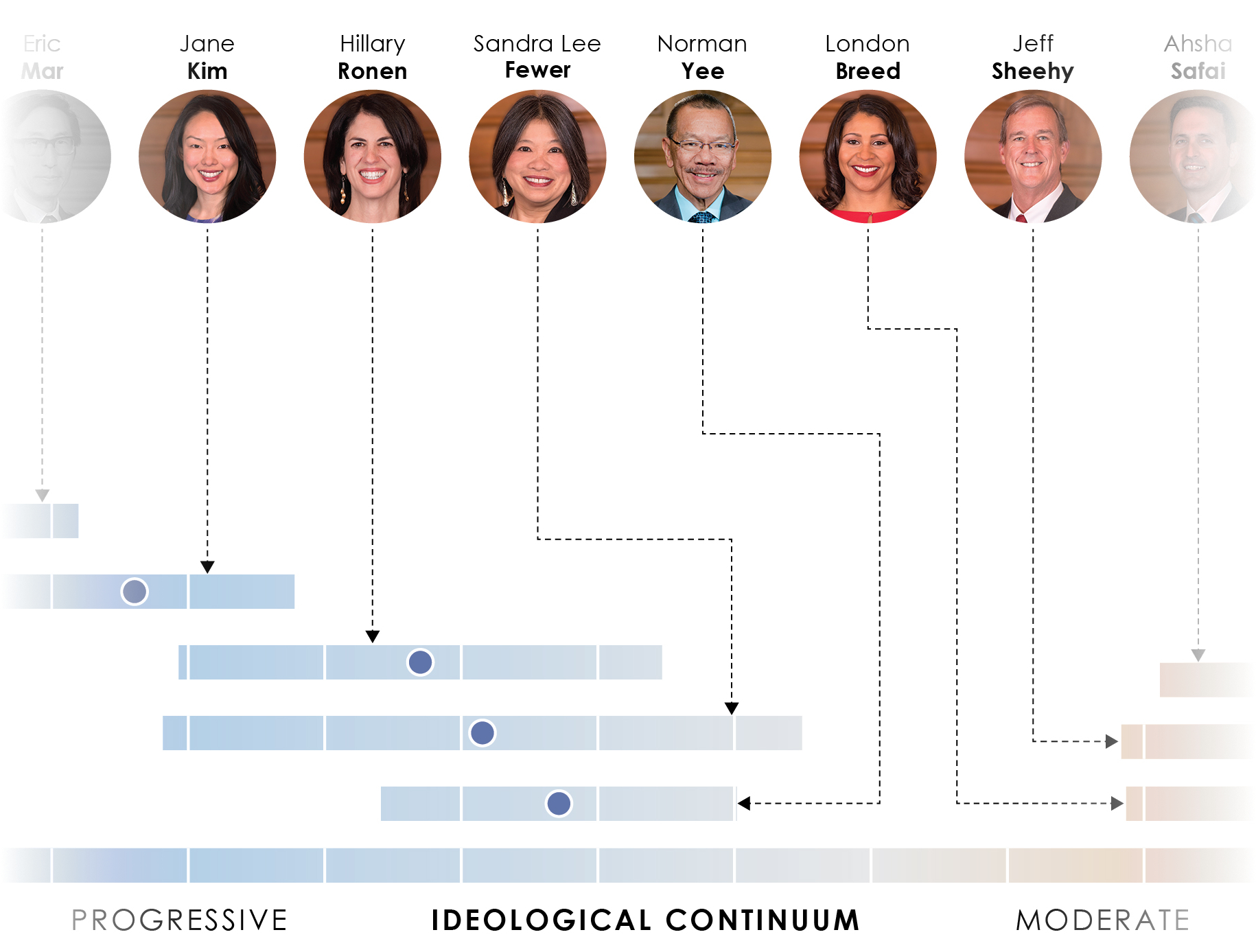 San Francisco supervisors Jane Kim and London Breed are both vying for the mayor’s seat in the June 5 election. Kim is a political progressive and Breed is a moderate, according to an analysis by faculty at the University of California, Davis.

When media outlets and pundits have argued that local officials were politically progressive or moderate, it mostly was based on observation and conjecture. But now, in San Francisco at least, such assertions are buttressed with data.

In partnership with the San Francisco Public Press, UC Davis faculty analyzed almost 3,400 choices that 16 recent San Francisco supervisors and the late Mayor Ed Lee made during nearly 400 votes and legislative actions. Using an approach applied to members of Congress for decades, the researchers then mapped where those politicians fell ideologically, relative to each other, revealing two political factions that have long battled to craft city policy.

Though she has eschewed the tag, newly elected Mayor London Breed rates as a political moderate. Based on a progressive-to-moderate ideological scale, she falls nearer the progressives than any other moderate — Breed is between District 7 Supervisor Norman Yee, significantly farther “left,” and former District 8 Supervisor Jeff Sheehy, slightly to the “right.”

To no one’s surprise, Supervisor Jane Kim, who was one of Breed’s main rivals to fill out Lee’s term, resides firmly on the progressive side of the continuum. Supervisor Aaron Peskin was rated as the most progressive, or left-leaning, of the supervisors included in the analysis, while former Supervisor Scott Wiener, now a state senator, was rated the most moderate, or right-leaning.

Breed’s voting behavior, while representing District 5, implies that she can be something of a swing vote, bridging the divide between other moderates and the progressives. She has a wider ideological “comfort zone” — the degree to which she appears willing to deviate from her sweet spot — than any other longtime board member.

We published those findings in the lead-up to the June vote. Now we break down how the researchers came up with their rankings.

Supervisors were mapped based on their actions while serving on the board from 2015 to May 1, 2018. An analysis of votes from a different time period might yield different positions. There were insufficient data to map Supervisor Catherine Stefani, whom Supervisor Mark Farrell appointed to fill his District 2 seat when he became interim mayor in January, weeks after Lee died.

To map San Francisco’s politicians, the UC Davis team applied a method of statistical analysis pioneered by political scientists Keith T. Poole and Howard Rosenthal, who charted the forces influencing the voting behavior of members of Congress. They were able to account for the “vast majority” of the millions of votes over the previous 200 years, they wrote in their 1997 book, “Congress: A Political-Economic History of Roll Call Voting.”

The model made some assumptions, including this crucial one: When faced with competing options, a politician will vote for the policy that seems to best align with his or her set of political and personal values. That choice is often between the status quo and a proposed legislation, meaning that a vote against the legislation is the same as a vote in support of the status quo.

When they applied this model, they found that the sequence of politicians reflected an ideological continuum — the most liberal member was on one end, followed by decreasingly liberal members, and then moderates, and then increasingly conservative members.

The model presumed that politicians’ choices are sincere. Of course, sometimes a politician will strategically support something he or she doesn’t like in exchange for a colleague’s support on something else. But this can be risky. Strategic votes that are severely out of character will attract press attention, becoming fodder for criticism and endangering re-election.

And the complexity of a choice can make a politician’s sincere decision appear otherwise. For example, the immediate choice might be between a legislation’s unpopular initial version and an amended version that would easily pass if put to a vote. A politician who preferred the amended version to its predecessor, but preferred the status quo to either, would actually vote against the amendment.

Politicians can also make mistakes, voting for the option that does not align best with their values. This can happen when a policy’s outcomes are difficult to project, or when choices are so similar that they are largely indistinguishable from each other.

For its analysis of San Francisco,the UC Davis team looked at 394 votes in which at least one supervisor disagreed with the rest. The Board of Supervisors’ many unanimous votes were disregarded.

“If you ask a bunch of 12th-graders what 2 + 2 is, you’re probably going to get the same answer from them,” said UC Davis professor Scott MacKenzie, who collected and analyzed city voting data with colleagues Cheryl Boudreau and Chris Elmendorf. “And that’s not going to tell you much about the differences between those 12th-graders.” Unanimity can also result from extensive deliberation over controversial issues.

The team was able to map Lee by analyzing instances when he sponsored, vetoed, or signed legislation that the board passed.

They excluded instances when Lee withheld his signature but did not veto because it “suggests the mayor does not fully approve of the board’s action, but declines to make an issue out of it,” MacKenzie said. If they had coded this behavior as an expression of approval, Lee woud have fallen farther left along the continuum. In other words, many of the unsigned bills were favored by progressives.

People who voted more frequently in the same direction landed nearer each other on the continuum. For example, former Supervisor Eric Mar voted slightly more with Campos than with Kim.

To determine politicians’ comfort zones, the team took 1,000 samples of random subsets of votes, used each one to plot a new continuum, and recorded how much each politician’s position varied across continuums. The greater someone’s variance, the wider the zone.

Narrower comfort zones generally resulted for politicians who served longer, because they produced more voting data for the UC Davis team to analyze. This made it easier to pick out anomalous behavior.

The faction with the majority of board seats can drive policy, with major consequences. There may be no better recent example than the fight over regulating Airbnb and other short-term rental companies.

By spring 2014, a one-day snapshot showed 4,798 properties listed on Airbnb in the city, according to a data-scraping firm hired by the the San Francisco Chronicle. Hosts were in violation of the city’s law banning home rentals for periods shorter than 30 days. For about one-quarter of listings, hosts appeared to be renting to guests more than 10 times per year. Supervisors and housing activists said the ballooning industry was changing the city’s culture and making homes unavailable to long-term renters, worsening the housing crisis.

The Board of Supervisors passed a law requiring the hosts to register with the city. When few complied, the moderate and progressive factions put forth competing legislation in 2015 to rein them in. At the time, Breed was president of the moderate-majority board, so that faction handily killed the progressives’ proposal and passed its own. A more progressive mayor might have vetoed the regulations, which were more lenient to Airbnb and its hosts. But Lee — also a moderate, based on the UC Davis analysis — signed them in short order. The moderates also shot down a separate amendment by progressive Supervisor David Campos to require Airbnb and its competitiors to submit quarterly reports on hosts so scofflaws could be identified and fined.

It became clear in 2016 that the new regulations were also ineffective. Campos put forward legislation to fine companies $1,000 per day, per listing by unregistered hosts. Peskin’s re-election had put progressives in control. Breed added her support, and the remaining moderates followed suit. The legislation passed with 10 votes, a veto-proof majority; Farrell recused himself because of his ties to the industry.

Short-term rental companies sued, but later settled, agreeing to provide frequent reports on their hosts so that the city could verify it was following the rules — similar to Campos’ failed 2015 amendment.

Airbnb’s operations in San Francisco had thrived under the moderates’ regulations, and its listing reached about 10,000 in August 2017. The progressives’ more restrictive measures caused the company’s listings to drop by about half.

Breed said her support for tougher Airbnb regulations was not a political reversal, just a response to new information. The moderates’ original law had proven ineffective and needed tightening.

And that might be true. Or maybe this was one of many examples where she tried to blur her association with the moderate camp, possibly for political advantage.

When her board colleagues chose her to be president in 2015, three years after her election to office, she openly rejected the label. “I am not a moderate,” she said in her acceptance speech, “I am not a progressive. I am a San Franciscan through and through.”

The next year, when she backed the progressives’ regulations on short-term rentals, she was also locked in a campaign to keep her seat as District 5 supervisor against Dean Preston, an attorney and executive director of the statewide group Tenants Together. He lost to Breed and is now running to unseat her appointed successor. Breed’s alliance with the progressives complicated the widely held belief that Preston was the more liberal candidate. If her strategy was to sway self-identified liberal voters, it apparently worked.

After defeating Preston, she again challenged the moderate label in an interview with Hoodline.

Why? Possibly because it carries an implied connection to other, fraught elements within the broader political narrative — the influence of the real estate and tech industries, as well as former Mayor Willie Brown, on San Francisco’s identity and future.

But MacKenzie said the UC Davis team’s analysis makes it clear where Breed lies on the ideological spectrum.

“She votes as a moderate,” MacKenzie said. “There’s not much question about that. She’s very comfortably to the right of all of the self-identified progressives on the board. And it’s kind of hard to distinguish her from Ed Lee in terms of her voting record.”

This is an updated version of an article published originally on June 1, 2018.