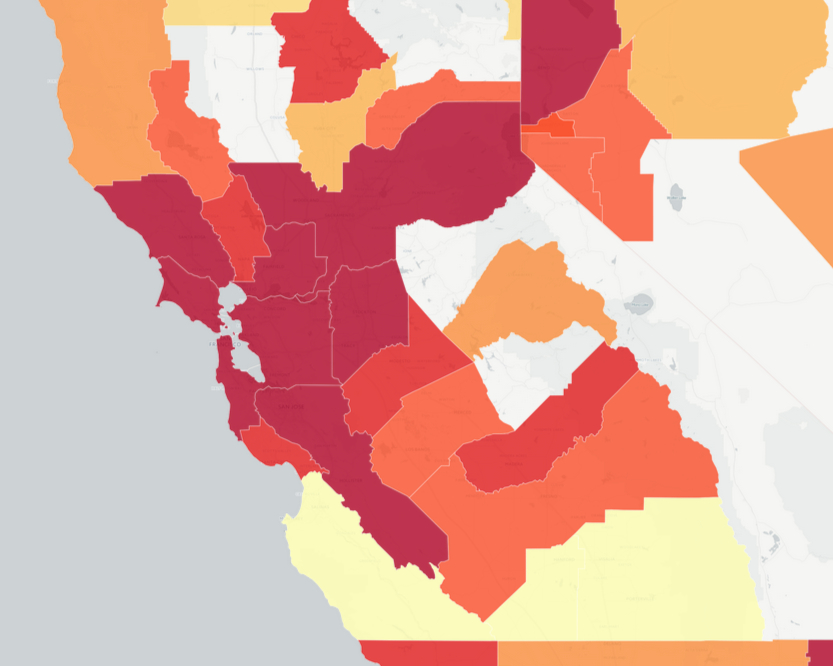 Census estimates show the Bay Area is growing faster than most of the U.S. Screenshot of map by KQED.

The Census sees the region growing about one-third faster than the 1 percent annual pace predicted by the Association of Bay Area Governments, a regional planning body. (A spreadsheet containing the data is downloadable at the bottom of this article.)

By the year 2040, an estimated 9.3 million people will call the Bay Area home, according to the group’s Plan Bay Area, published in 2013 and intended as a planning guide for local cities.

Plan Bay Area directs cities to use a “smart growth” approach to accommodate the region’s increasing population. That approach aims for dense urban areas where all the necessities of modern living are nearby and cars are obsolete.

Those are the features that attract people to live in places like San Francisco and Oakland, said Egon Terplan, regional planning director for the San Francisco Planning and Urban Research Association. Residents can “hop on a bus or hop on a train” to get to their jobs, medical appointments or school, Terplan told reporter Angela Hart for the San Francisco Public Press’ summer 2012 special report.

But our report showed that cities may lack the money to follow Plan Bay Area’s guidelines, and the Association of Bay Area Governments cannot force them to. So it will likely be up to individual cities to figure out ways — smartly or not — to adapt to population growth.

An interactive map that KQED’s News Fix team created shows how the Census estimates that the Bay Area’s population changed. Growth here outpaced most other regions of similar size nationwide, though parts of Texas and Florida also grew fast.

Politicians have lamented that the pace of housing construction has not kept up, which has helped inflate prices.

A $500 million transportation bond, which voters approved in November, will fortify the city’s public transit system to help absorb the strain.

Mayor Ed Lee has said he will do everything he can to ensure that 30,000 homes are built by the year 2020 — eclipsing construction rates of recent decades. But, as we have previously reported, Lee’s total actually includes existing homes that would be rehabilitated, not just new ones. And projects that were planned when he set that bar already totaled 30,000.

San Francisco’s most recent Pipeline Report, which tracks construction in town, showed that pending projects would add more than 50,000 units of housing if they were all approved and built.