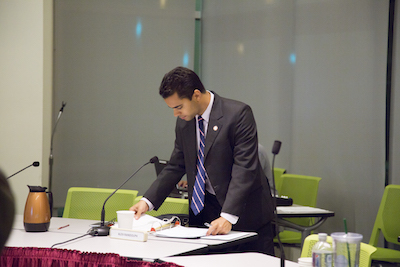 Three candidates are challenging incumbent Trustee Alex Randolph for a seat on the Community College Board: Wendy Aragon, Tom Temprano and Jason Zeng. Alex Randolph was appointed by Mayor Ed Lee in April. He has worked in San Francisco’s Recreation and Parks Department and, among other government jobs, was an aide to former supervisor Bevan Dufty.

“Ensuring equitable access to high quality student services and counseling will be one of my priorities as a Trustee,” he says on his website. Aragon describes herself as the latest in a long family line of trades workers and labor members. A San Francisco State University graduate, she rose from receptionist to project manager for general contractor Principal Builders.

She said her construction background positions her to “thoughtfully weigh in” on capital improvements, a process that “requires the ability to deal with complex budgets, effective project management, negotiating difficult processes, and delivering end results that will reflect on our credibility for years to come.” She adds that many City College campuses are “in dire need of deferred maintenance.”

If elected, she said she would push for local-hire agreements with contractors that pay prevailing wages and “respect unionized labor.” Tom Temprano is former co-president of the Harvey Milk Democratic Club. He writes the “Tom’s Town” column on the news website 48 Hills. He began his political career as an intern for Supervisor Chris Daly in 2008, and worked on Supervisor David Campos’ 2012 re-election campaign. He also co-owns the Outer Mission/Bernal Heights bar Virgil’s Sea Room, and co-founded and DJs at Hard French, a monthly, outdoor, soul dance party.

Temprano has underlined his ties to the LGBT community and culture, which have guided his identity and politics.

Jason Zeng, a data analyst, has a specific but limited agenda concerned mostly with making students more computer literate, and connecting them with the technology industry.

He is forgoing most “standard campaign novelties,” such as a website, he said in an email to the Public Press. Instead, he is promoting himself at in-person endorsement meetings.

None of the candidates have attended City College of San Francisco.

For years, City College has been at risk of losing its academic accreditation, and that has scared potential students into attending other schools instead. Because the state gives the institution $5,000 per every full-time student, the drop in enrollment has hit City College hard. Since 2012, enrollment has fallen more than 25 percent.

The state has stepped in for now, providing interim funding into 2017 while the college tries to bring enrollment back up.

Amid these high stakes, the College Board candidates have put enrollment at the top of their agendas.

Randolph, Aragon and Temprano have said that City College should do a better job recruiting San Francisco public school students before they graduate. Randolph has said the college needs to market itself more aggressively throughout the city; Temprano agrees, citing nearly a decade of experience “running marketing campaigns for nonprofits, government agencies and my own small business.”

Randolph wants to increase outreach to “underrepresented students” for STEM careers — science, technology, engineering and mathematics. He cites a need to promote “high-demand subject and emerging career fields such (as) biotechnology, programing and computer science.”

Aragon has said that City College could attract more people by strengthening its relationships with potential employers in fields like nursing, fire science, the construction trades, information technology and the growing renewable energy industry.

“One of the best ways to boost our enrollment is to work with trade unions to bring apprenticeship programs to City College,” she says on her website.

Zeng has said he would specifically try to grow partnerships between the college and local technology companies.

Randolph is against tuition increases, but Temprano has said he would try to raise tuition for international students so that the college could afford to charge local students less. International students pay $257 per unit, compared with $46 for California residents. Temprano has also suggested cutting middle management and “high priced consultants,” investing that money in students, teachers and workers instead.

Temprano says the funding should be targeted “to help students get into 4 year colleges and careers that will pay them living-wage jobs.”

Zeng has said that he would work to reduce the base cost of City College to less than $200 per semester for San Francisco residents, while increasing teacher salaries.

Aragon has said that she supports “the effort to make community colleges free of charge.”

The candidates differ starkly on whether police should carry guns on campus.

Aragon is staunchly against it. Temprano has not said that he would try to ban guns, though he has argued that firearms seem unnecessary because campuses tend to be near police stations, giving officers ready access to backup in emergencies.

Zeng has said that “it doesn’t make sense” for officers to remove their weapons after stepping onto campus, because the gun is “part of their overall gear.”

Randolph did not answer this question on his questionnaire seeking the endorsement of the San Francisco Green Party.