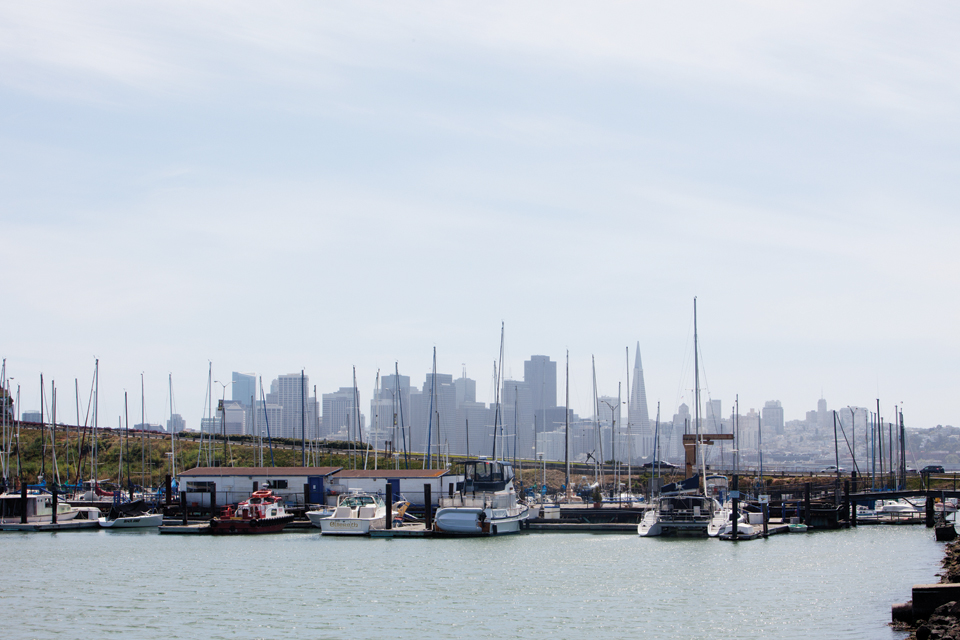 The plans include a 500-slip marina. Photo by Monica Jensen/SF Public Press.

Master plan aims high. Will big money and hardball politics bring it down?

What does the massive redevelopment of Treasure Island give to San Francisco?

First and foremost, it funnels public money into jobs for construction workers and profits for the contractors who will do the building. The project also promises to loosen up a housing market that has stayed tight through the recession, creating 8,000 new residential units, 30 percent of it affordable housing. Bonus: All those new residents (around 20,000) and businesses will add significantly to the city’s tax base.

But the Treasure Island redevelopment, which aims to be the most ecologically sustainable community in the world, delivers something else as well: a positive self-image of San Francisco as a forward-looking, avant-garde, socially and environmentally responsible metropolis. Nothing excites the utopian impulse more than a blank slate — and Treasure Island’s 486 acres have been semi-abandoned since the Navy shut down its base in 1997.

Thus the island provides an almost-ideal laboratory for the latest green building and urban design techniques. In fact, reading the Treasure Island redevelopment plan (which you can do yourself at www.sftreasureisland.org) instantly reminded me of Ernest Callenbach’s classic 1975 novel “Ecotopia,” which speculates what would happen if Northern California, Oregon and Washington separated from the United States and tried to develop an ideal “stable-state” economy and culture.

Branded by some as a hippie-dippie relic, the book holds up shockingly well in 2010—and it continues to be discussed after having sold more than a million copies in nine languages. Some of Callenbach’s wacky, far-out proposals — like requiring every Ecotopian household to sort waste into compost and recycling — are now the twenty-first-century reality in Bay Area cities. Other ideas — like carbon neutrality — have come to seem perfectly reasonable in the age of rising sea levels. The following laundry list could come from Callenbach’s “Ecotopia”— but, in fact, these items come straight out of the Treasure Island sustainability plan:

Great. But will this vision become a reality? The funny, but predicable, thing is that Treasure Island’s Ecotopia has some big, big bucks behind it, an estimated $5 billion. A lot can happen over the course of the two decades it will take to build Treasure Island — and with that much money at stake, the Ecotopian vision might not survive the ground-breaking and ribbon-cutting. It’s this tension between big vision and big money that makes the project interesting — and reveals both sides of San Francisco’s split personality.

On one side, stand the visionaries — people like Ernest Callenbach, who’d like to see urban life restructured along ecological lines. On the other side, we find the big money and hardball politics that make the Bay Area one of the wealthiest and most expensive regions in the world. Massive developments like Treasure Island don’t happen in velvet boxes. As this issue’s report by Victoria Schlesinger, Bernice Yeung, Alison Hawkes and Christopher Cook reveals, it took a lot of backroom deals to make this Ecotopia possible — and the players wouldn’t have gotten in the game if they hadn’t smelled a profit.

“Redevelopment in San Francisco has a bad reputation going to back to the ’60s,” says Chris Carlsson, director of the Shaping San Francisco oral history project, lead instigator of the Critical Mass bike ride and author of the 2008 book “Nowtopia.” “Without the strong public support, they don’t get permission to do it.” Indeed, the more one learns about the stake lobbyists and developers have in Treasure Island, the more one wonders if the Ecotopian vision isn’t just a way to sell development to a skeptical public.

Treasure Island isn’t the only, or even the first, eco-city under the sun. Other grand Ecotopias have not gone as planned: Critics like Christina Larson, writing in Yale Environment 360, argue that master-planned ecocities like Huangbaiyu, Liuzhou and Dongtan in China, which were all greeted by waves of fawning press, have so far fallen far short of their goals:

Dongtan and other highly touted eco-cities across China were meant to be models of sustainable design for the future. Instead they’ve become models of bold visions that mostly stayed on the drawing boards — or collapsed from shoddy implementation. More often than not, these vaunted eco-cities have been designed by big-name foreign architectural and engineering firms who plunged into the projects … with little feel for the needs of local residents whom the utopian communities were designed to serve.

But Treasure Island is in some ways quite different from those projects. Its commitments to stormwater wetlands and clean energy are legally binding, unlike in China. And unlike the Chinese projects, the Treasure Island redevelopment has been subjected to 15 years of intense expert scrutiny and public involvement. During a recent trip to Treasure Island, I saw signs everywhere advertising meetings for residents to give feedback on the project. When I asked one two-year resident if he’d had a chance to make his voice heard, he just laughed. “I’ve had too much opportunity!” he said. “I’m sick of hearing about it!”

Critics like Carlsson remain unconvinced, faulting the master-planned nature of the project. “The problem with master planning is that it’s a fantasy that you can engineer a good social life and sustainable living through architecture and design,” he said. And building a new city in the middle of the Bay is far from carbon neutral; two decades of construction will inevitably have a massive impact on the Bay’s ecology. It would be far better, Carlsson argues, for the island to become a laboratory and educational resource dedicated to “reintegrating the Bay as a food source and ecological resource for the community, not just something pretty to look at.”

But Carlsson emphasizes that even the most flawed development can be transformed by the people who live there. “I can imagine in 25 years people taking it back from the planners and turned it into a funky space where people live,” he says. Ernest Callenbach, ever hopeful, made a similar point, choosing to see Treasure Island as a process and an opportunity. "It’s rare for a city to get the chance at spinning off a better self,” he told me. “Mitosis happens in biology. Now let’s see if San Francisco can do it in ordinary life!”

In the end, the only thing we can do is watchdog the project as it unfolds over the course of the next 20 years, and try to hold developers and city officials to their promises — indeed, that’s why we launched our research into Treasure Island. From this perspective, Treasure Island stands to become a battleground, not utopia — and this shouldn’t surprise us. The word “utopia” is a Greek pun that simultaneously means “perfect place” and “no place,” suggesting that perfection is impossible. But the meaning of “ecotopia” is quite different: “eco” means home, and “ecotopia” is simply a human habitat. Treasure Island will never be utopia, but the plan does give us an ideal worth fighting for.