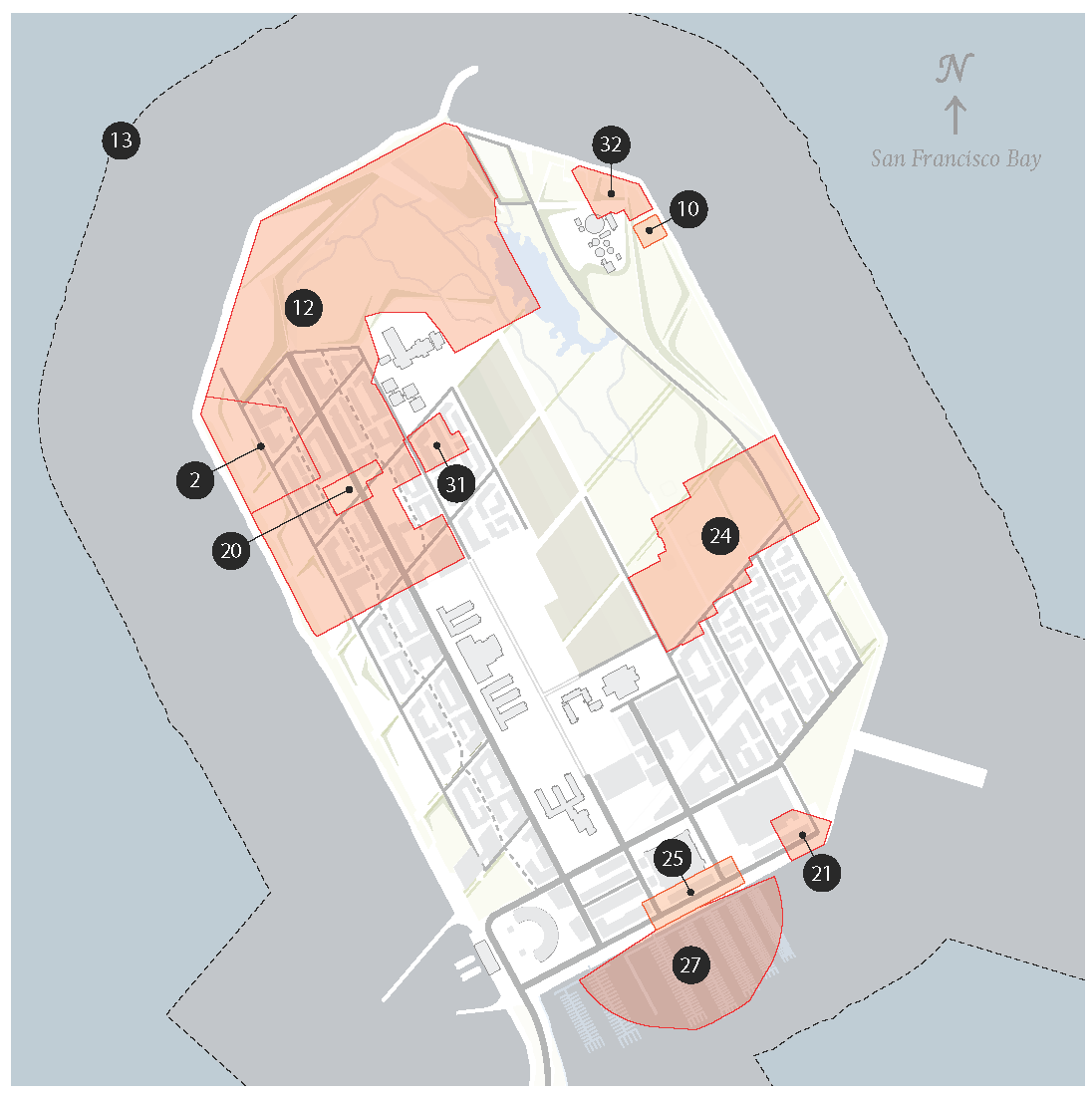 Subsoil pollution on Treasure Island, overlaid on a map of future development plans. Graphic by Shawn Allen, Stamen Design. For a key to toxins and an explanation of historical uses of various sites, see explanation below.

Many Treasure Island sites have been decontaminated through soil removal or capping, which entails covering the remaining toxic soil with a clay cap. But there is growing concern that coastal sites once considered sufficiently remediated may become problematic as sea levels rise. Contaminated soil could come in contact with ground water as the sea pushes it higher. Bay Area scientists and regulators are beginning to explore the problem given the large number of former military sites in the region.

As a former military site, Treasure and Yerba Buena islands suffer from environmental pollution problems affecting their soil, water, air and existing buildings. Not only does the Navy have environmental remediation to complete – from the removal of DDT and petroleum products to PCBs and lead – but also the developers anticipate that additional clean up will cost them $33 million. But because the Navy is only required to remediate an area to current use standards, if the developers want to build homes where an auto shop once stood, more cleaning will be required.

In addition to soil concerns, the construction on Treasure Island will last at least 18 years causing unavoidable and significant increases in traffic, ground vibrations, noise and air pollution, according to the forthcoming Treasure and Yerba Buena Islands draft Environmental Impact Report, which the Public Press obtained through a public records request. The draft EIR is subject to change prior to its official release in mid-July.

Particulate matter measuring the size of a human red blood cell or smaller is of concern and “may lead to adverse health effects” in people exposed to substantial amounts of it.

The report also says traffic will increase – despite plans to mitigate construction traffic and discourage the use of cars on the island – during peak hours on the Bay Bridge and downtown San Francisco.

The city will likely adopt a statement of overriding consideration, concluding that the project’s environmental damage is unavoidable and outweighed by its potential benefits, said city officials. Site 2
Decontamination Training Area
LU: Was used for radiation decontamination training for 20 years, is currently housing, and will be housing.
P: Radioactive materials.
S: Closed in 1988.