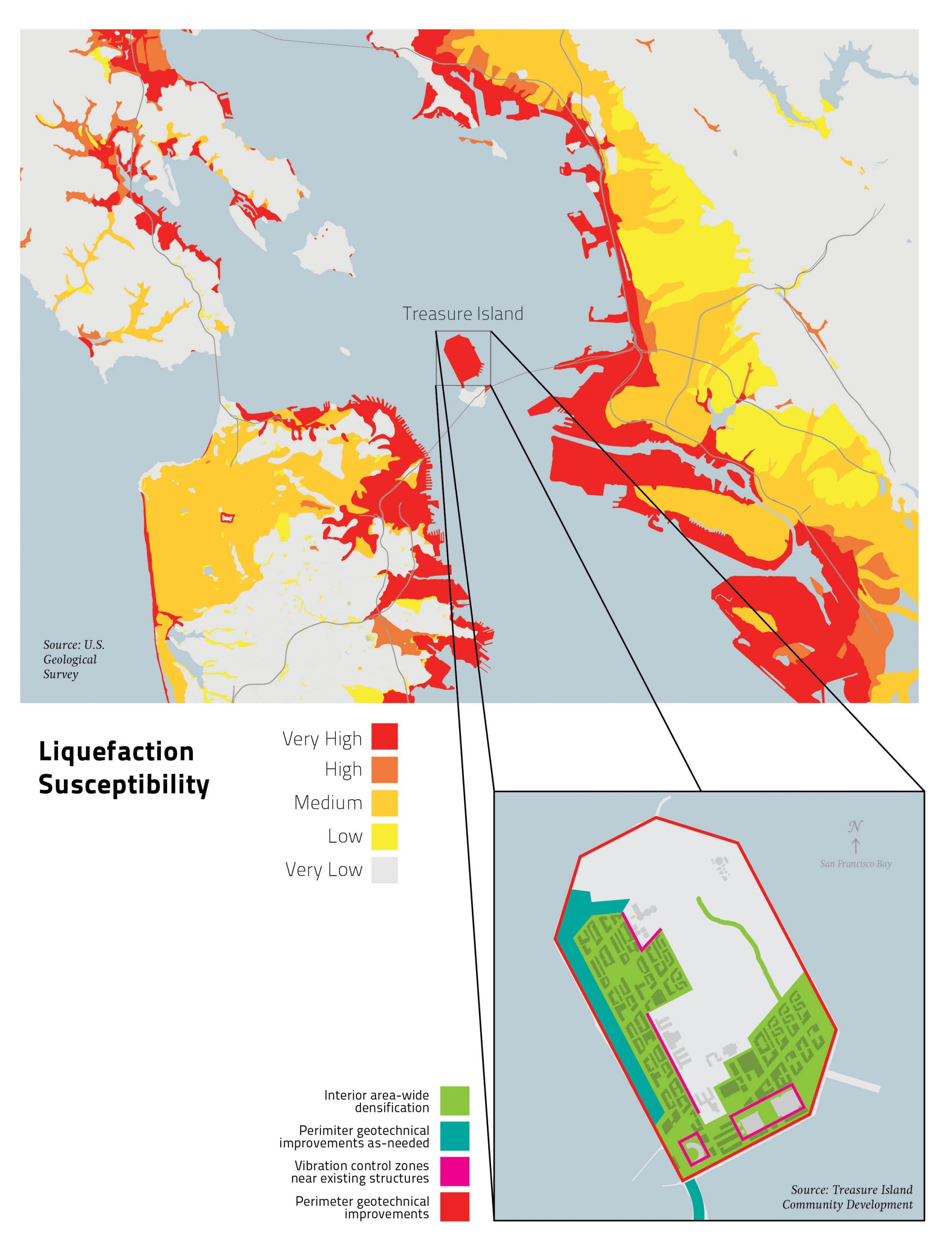 There is a high probability that a Loma Prieta magnitude or greater earthquake will shake the Bay Area during the projected 18-year redevelopment of Treasure Island. However, city development officials say the island will ultimately be safer than the liquefaction-prone areas of downtown San Francisco and the Marina.

Parts of the city’s shoreline and all of Treasure Island are manmade. The island was constructed in the 1930s out of sand and silt dredged from the Bay and held in place with a riprap retaining wall. When loose water-saturated soil is shaken intensely, it turns into a thick, unstable liquid, a process called liquefaction.

The city and developer plan to compact the 100 acres of soil that will lie beneath the new buildings and around existing ones, as well as reinforce the island’s perimeter. They estimate the geotechnical improvements will cost $137 million.

“The buildings should structurally perform well on such soil assuming they are built to code,” said Thomas Holzer, a U.S. Geological Survey research geologist who studied Treasure Island following the 1989 Loma Prieta earthquake. “The untreated open space area could be pretty exciting in a large earthquake with water and sand spouting out of the ground.”

Water and sand can push up to the ground’s surface and produce sand boils, resembling geysers, during liquefaction. About 300 acres of open space and parks on Treasure Island will remain untreated.

This has another expert concerned. “Treasure Island has a significant problem. It was very poorly engineered when it was built, in terms of geotechnical engineering,” said Jack Boatwright, U.S. Geological Survey senior seismologist

There is a two-out-of-three chance that the Bay Area will experience another earthquake of a 6.7 magnitude or greater within the coming 30 years, according to the 2008 Uniform California Earthquake Rupture Forecast.

A 7.0 magnitude earthquake along the nearby Hayward-Rodgers Creek fault system would cause Treasure Island to shake with an acceleration of .5 g-force, which is strong enough to knock people to the ground, said Boatwright.

In comparison, Loma Prieta measured 6.9 magnitude and was 60 miles from Treasure Island, producing about .3 gs there during its roughly four-second peak.

Treasure Island is flanked by two of the region’s most volatile faults — the San Andreas lies 18 miles to the west and the Hayward is 7 miles to the east — the Hayward-Rodgers Creek Fault system is due to move soon. Its last quake was in 1868, with a 6.8 to 7.0 magnitude, and scientists estimate that the fault shifts every 140 years.

Areas such as Foster City, where the fill has been compacted, suffered little damage during Loma Prieta, according to Boatwright.

Treasure Island Community Development will improve the island’s perimeter, possibly by strengthening it with stone or soil cement columns and rock berms. The interior areas beneath the new development will undergo densification through deep dynamic compaction, which entails repeatedly dropping a very heavy weight on the ground.

The developers also will siphon water from deeper layers of mud and sand to the surface though a process called surcharging that helps settle the soil. Vibratory compaction methods, which compact the soil through shaking, will be used as well.