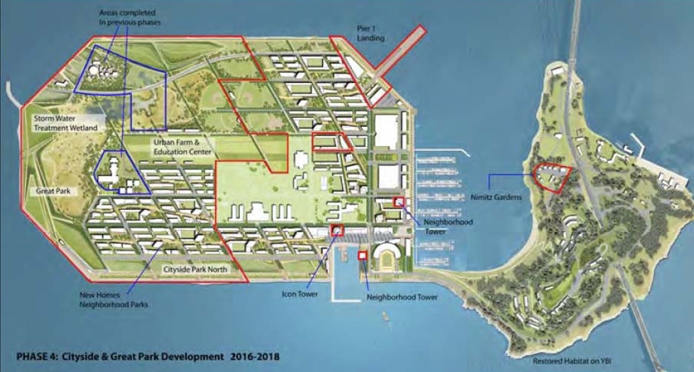 Phase four of the Treasure Island redevelopment plan is scheduled to start in 2016. Courtesy of TIDA.

Most of Treasure Island will be inundated by the end of this century, if the documented progression of the ocean’s rise caused by climate change continues as predicted. Studies foresee sea-level rise ranging from as little as five inches to as much as six feet. The lowest parts of Treasure Island lie just four feet above the Bay’s low tide.

To buffer the island from the Bay, project officials say they have hit upon a solution that protects the development from ever-changing climate change assumptions.

They will build up the ground on 100 acres of the island to accommodate as much as 36 inches of sea-level rise, set back development from the shore and leave room for future levees or other adaptations.

The currently planned work, including geotechnical improvements, is estimated to cost $137 million. If the developers are wrong, and sea-level rise is more extreme, the costs would climb higher.

“There are projections that range all over the map,” said Jack Sylvan, redevelopment director of the Treasure Island Development Authority, which oversees the island’s transformation for the city. “The challenge is, how do you actually plan for something that you don’t know what it’s going to look like?”

Absent a fixed upper limit for sea levels this century, the rationale for a three-foot lift — as opposed to any other height — is based partially on optimistic scientific projections, cost considerations and the challenges of building on an unstable manmade island that has been sinking in one corner. Without being able to point to any concrete financial, technical or scientific limitation, the city says it is comfortable taking a chance on 36 inches. The city Planning Department’s forthcoming Treasure Island environmental impact report, obtained through a public-records request, finds the approach acceptable.

The city and developer consortium reviewed seven climate change research papers published between 1987 and 2007 with sea-level-rise estimates ranging from five to 55 inches by the end of the century. The latter, worst-case scenario was predicated on a disastrous 5.8-degree Celsius rise in the global average temperature.

They also looked to the Bay Conservation and Development Commission, the state’s California Climate Adaptation Strategy, and to Gov. Arnold Schwarzenegger’s Delta Vision Blue Ribbon Task Force. All use 16 inches by 2050 and 55 inches by 2100 as upper benchmarks, though labeling those numbers as improbable.

Based on their review, the developer and the Treasure Island Development Authority together concluded that in 2075 sea-level rise may reach 36 inches, a scenario they all said makes the planning workable.

But increasing attention to climate change and its broader effects has led to a flurry of new research. Sea-level rise predictions still range widely, and developers and governments worldwide combine the data in a variety of ways.

The three most recent studies use semi-empirical models, which incorporate increasing rates of change. If global temperatures increase by 2.8 C — a likely scenario — sea levels will, on average, rise between 33 and 57 inches by 2100.

A few years ago, a 55-inch rise seemed like a fringe scenario. But according to these most recent studies, that is likely to happen.

And if the unthinkable were to occur, and global temperatures increased by 6.1 C, the ocean could rise by 70 inches, calculates Potsdam University ocean physicist Stefan Rahmstorf in his 2009 paper.

These modeling experiments take into account melting land ice — a significant factor set aside in many sea-level-rise estimates, including reports issued in 2007 by the United Nations Intergovernmental Panel on Climate Change, an international body of scientists.

BUILDING IN THE DARK

State and local agencies have provided little concrete guidance on Bay Area coastal development projects grappling with sea level rise. The Treasure Island build-up plan has not yet received the official blessing of the San Francisco Bay Conservation and Development Commission, a key regional regulator that recommends that all builders look at how future sea level will impact their projects. Treasure Island Community Development, the project’s developer consortium, has informally shared its sea-level-rise plans with the commission.

“The commission has no formal opinion on this project,” said Steve Goldbeck, the commission’s deputy director for climate change and legislation. “But I can say that the approach they’re taking, I think, makes a lot of sense.”

The city and developers gave various, and at times conflicting, answers as to why exactly 36 inches was the most appropriate height to raise the developed parts of the island, instead of the more cautious 55 inches, suggesting there are geotechnical and financial limits to what can be built.

“If we always took the most conservative approach, a lot of things wouldn’t happen,” Sylvan said.

To bulk up Treasure Island for sea-level risks, Treasure Island Community Development turned to Moffatt & Nichol, an international engineering firm known locally for its work on the new Bay Bridge and Ferry Building.

Moffatt & Nichol proposed adding enough soil to raise 100 acres of the island, where the building pads and infrastructure will sit, by 36 inches above the 9.1-foot, 100-year high tide. They also added six inches of “freeboard,” a term engineers refer to as a “fudge factor.” The remaining 230 acres will be left at their current height. (Yerba Buena Island, an adjacent outcropping of bedrock measuring at its peak roughly 338 feet tall, does not need to be raised.)

New properties will be set back 300 feet from the shore allowing room for adaptation should the sea rise more than 36 inches. One plan is to increase the height of the perimeter’s rip-rap retaining wall, which currently stands between 12 and 14 feet, by piling more rocks on it. This is the least expensive of various adaptation options, which will be paid for through a tax on Treasure Island residents.

The project’s managers have not yet calculated the cost of raising the perimeter or other strategies, but all parties assume that option will be cheaper than building for a 55-inch rise. That expense has not been formally calculated either.

The city guessed it might cost an additional $130 million to build the development pads to 55 inches. And yet, cost may not be the significant obstacle. Instead officials said that adding more soil weight could jeopardize the island’s stability and impact the rest of the design plans.

Dilip Trivedi, a Moffatt & Nichol coastal engineer working on the Treasure Island project, said mounding to 55 inches would be “a huge cost difference.”

“You could go to 55 inches,” he said, “but at some point it doesn’t become cost effective. At that point then the project suffers, we can’t do the project anymore.”

So while technically possible, he said the height increase would also leave the federally owned Job Corps Center, which the development will not own or alter, at the bottom of a hole in the center of the new neighborhood.

“In the end it was, ‘Why 55 inches?’ Even that could be wrong,” Trivedi said. “How is it that we don’t build for the 1,000-year earthquake then? We don’t. It’s a matter of acceptable levels of risk over your planning horizon.”

The major variable is the pace of global warming and climate change. Scientists say they still need to better understand how polar ice sheets and mountain glaciers are responding to climate change in order to make more accurate predictions. In particular the Greenland and Antarctica sheets “have started to flow much faster towards the sea in recent decades, which contributes to rising sea levels,” Rahmstorf, author of multiple studies on sea-level rise, wrote in an e-mail.

“That this would happen so rapidly was unexpected,” Rahmstorf said. “That is probably the main reason why sea level rise has been underestimated in the past."