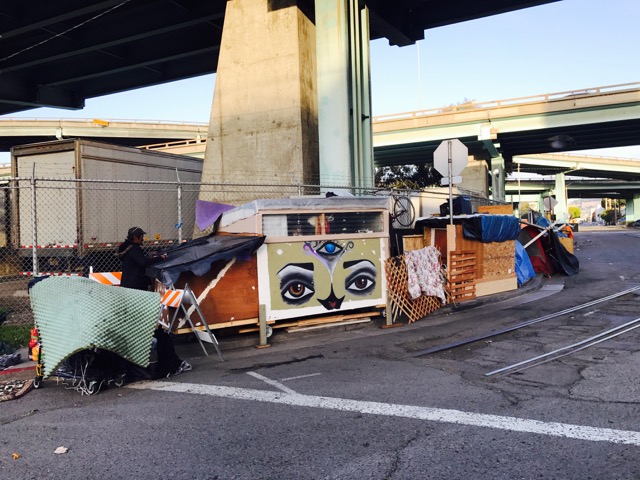 How solutions-focused journalism can aid the dispossessed

Starting this fall, the Public Press is reporting on new and creative solutions to homelessness. And because we know we don’t have all the answers, we’re engaging the community to gather fresh ideas and inspire action.

In January 2018, the Public Press will host a daylong conference, Solving Homelessness: A Community Workshop, in collaboration with other Bay Area news organizations to explore novel approaches through live events, social media and shoe-leather reporting.

Most politicians, social service workers, businesspeople, activists and neighbors working on the issue are well-meaning, but they often disagree about solutions. Bay Area residents are brimming with creative ideas not yet deployed on the streets or on the agenda of local legislators.

How We Got Here

In January 2016, Renaissance Journalism, a locally based organization focused on improving the depth of reporting, convened a meeting to discuss “news deserts,” communities whose voices and concerns are often neglected in local journalism. In a workshop focused on the scarcity of affordable housing, I asked: “What would it take to solve homelessness in one year?”

The group ran with the idea, organizing a June briefing for journalists on how to deepen their reporting. See: “How Media Coverage on Homelessness Falls Short (And What Reporters Can Do About It)”

That month, the San Francisco Chronicle and KQED organized a week of coordinated publishing, the SF Homeless Project, involving more than 70 news organizations. It was repeated last December and again in June. Though little of it involved long-term investigations or true collaboration, it was an example of journalists being agenda-setters and drawing the public’s attention.

San Francisco State University journalism professor Laura Moorhead, who has studied the project’s output, questioned its efficacy. She said reporters should offer constructive structural critiques, not just exhortations to politicians to fix the problem by doing something — anything. Along those same lines, Anita Varma, a doctoral candidate at Stanford, found in a soon-to-be published study that many SF Homeless Project-related pieces told tales of people “down on their luck,” rather than portraying them as victims of systemic failure. While empathy is a great first step, Varma concluded that “compassion as an end in itself does little to prompt social change.” Instead, she writes, what is needed is to frame stories in ways that inspire collective action.

For the January conference, diversity of perspectives will be key. We are inviting specialists in law, economics, art, architecture, technology, medical services, mental health, case management, job training, community organizing and other disciplines. Crucially, we need to engage those who have firsthand experience being homeless.

Renaissance Journalism is our lead sponsor for this event; we are seeking additional supporters. It dovetails with a new project by Renaissance Journalism, called the Bay Area Media Collaborative, which was established with funding from the Silicon Valley Community Foundation and the John S. and James L. Knight Foundation.

Readers have told us they want to hear about ways they can help solve problems. Our intention is not to veer into advocacy, but rather to independently investigate potential benefits, drawbacks and unintended consequences of new ideas. This is the approach we took for a June 2014 cover package, “Creative Solutions to San Francisco’s Housing Crisis”, and a conference we called Hack the Housing Crisis.

As Mayor Ed Lee rightly pointed out, “there is no silver bullet” solution to homelessness. Many small, often expensive, fixes are needed. In May, Tipping Point Community, a nonprofit that pools philanthropy, announced it planned to raise $100 million for an “initiative to reduce chronic homelessness by half” — creating new housing, boosting the public sector and reforming mental health, child care and criminal justice services.

The move is an ambitious one, and other entities will hopefully scale up their own efforts in kind. As that happens, it will be incumbent upon news organizations to continue broadening the debates about proposed solutions, rather than merely critiquing the troubling status quo.