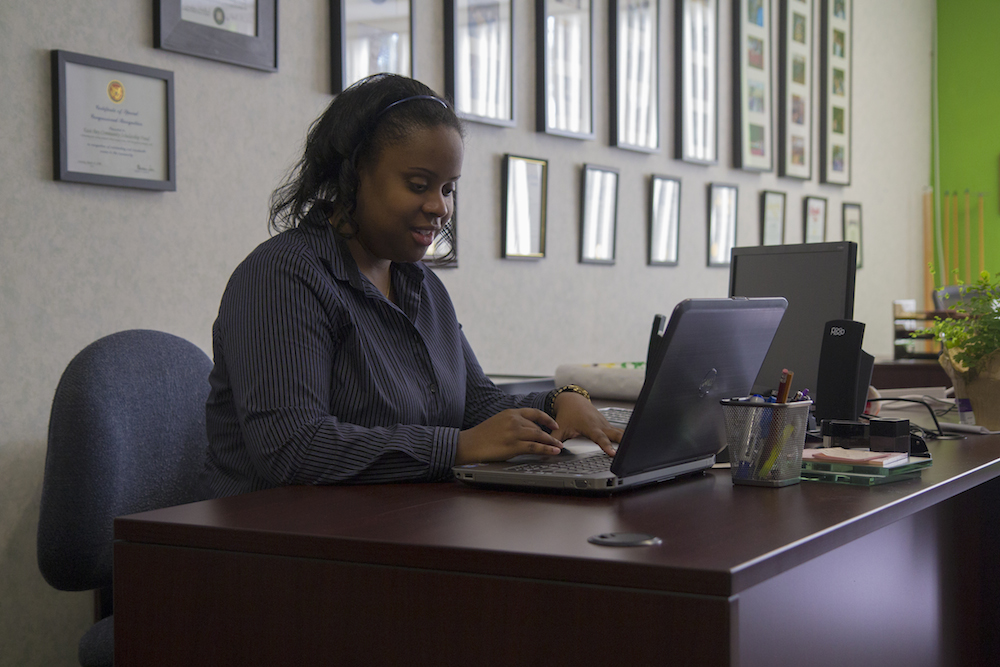 Give Something Back, an Oakland-based company selling office supplies, used state Employment Training Panel reimbursements to get employees up to speed on a new online chat system. The company is one of the smaller grantees. Photo by Tearsa Joy Hammock | San Francisco Public Press.

Some subsidies, worth hundreds of thousands of dollars, are awarded to multinational corporations valued in the billions

State subsidies for vocational training might provide a windfall to large corporations already able to offer similar instruction, if a planned expansion of a program funded through a tax on all businesses in California moves forward.

State officials say they aim the vocational training funding at big businesses in key industries that are in danger of relocating to other states. These firms provide stable employment and career ladders for large numbers of workers, they argue.

But while tens of thousands of smaller companies pay into the program via the Employment Training Tax — a small add-on to unemployment insurance payments from employers — it is hard for most to qualify for grants. Many do not even know the program exists.

Advocates for small businesses say that in practice, many employers are excluded because the state focuses on a few industries: manufacturing, health care, technology, media and life sciences.

Gov. Jerry Brown wants to expand the ceiling on the state unemployment insurance tax from the current levy on the first $7,000 of each employee’s annual pay to $9,500 and eventually $12,000. A legislative push to expand the tax in September was unsuccessful, but supporters expect another attempt next year. If an increase is implemented, it would also raise the Employment Training Tax, thereby funneling more revenue into the training program.

Once a month, the eight members of the Employment Training Panel convene in Sacramento to award training reimbursements to between 20 and 50 businesses.

Since its 1982 inception, the panel has doled out subsidies ranging from $10,000 to more than $1 million. Overall it has reimbursed more than $1 billion to some 80,000 California businesses.

Some grants go to consultants, community colleges and nonprofit organizations that train workers in a variety of occupations.

But others go to multinational corporations, who have an advantage if they are large enough to have significant training infrastructure and grant-application know-how.

In June the panel approved $672,100 for Boston Scientific Corp., a multibillion-dollar global manufacturer of medical devices. The funds will pay for training at the company’s Bay Area offices in Santa Clara and Fremont, and in the Southern California city of Valencia.

In its training proposal, the company said it would use the funds for training in manufacturing, accounting and equipment operations. But it did not itemize the training costs or explain whether an outside firm would be retained.

Boston Scientific is hardly hurting for cash. Just days after the approval, the company announced it would spend $275 million in cash to acquire a competitor, Bard Electrophysiology.

The company was contacted several times via email and phone, but representatives declined to comment or did not respond.

Stories like this one raise questions for skeptics in Sacramento who are looking to reduce state spending: Is training a normal business expense or the responsibility of the government? If the state plays a role, who benefits from this largesse?

State politicians started looking for expenses to cut when the state’s finances went into a tailspin a decade ago. Starting in 2003, the California Performance Review, created by former Gov. Arnold Schwarzenegger, analyzed hundreds of state programs and agencies to see where money was being used ineffectively.

The commission concluded that the Employment Training Panel “is not needed to perform job forecasting, training and advisory responsibilities. Many of its programs are duplicative of programs in other state agencies.”

The review suggested that the training panel be eliminated. That never happened, although the panel’s training subsidy program has declined. Jill McAloon, the panel’s executive director, said 20 years ago the panel had a $90 million budget.

“Now we’re lucky if we get $40 million,” she said, adding that this year’s appropriation is $50 million.

“Anyone paying into the fund is eligible to come forward and use it,” McAloon said. “They’re coming to us and accessing their own funds.”

But eligibility requirements suggest an uneven playing field. Grant recipients must show that they face strong out-of-state competition, that they are located in areas of high unemployment or that they fit into the panel’s priority industries.

The program calls itself “performance-based,” meaning subsidies are payable only after businesses complete training and retain workers for at least 90 days. Workers must earn their regular wages during training.

Applicants develop their own funding and training proposals.

While employers might be asked to change some things, nearly all applications are authorized, McAloon said: “I’ve been here since 1990, and I don’t remember there ever being a proposal that was not approved.”

But some industry associations say that there is little competition for the funds because smaller companies do not even know they exist.

“If I put out an email and said, ‘Does anyone know what the Employment Training Panel is?’ — if I got five people I’d be surprised,” he said. “If one person said they used it, I’d be surprised.”

Many employers also do not know they pay the Employment Training Tax, Hauge said, overlooking the small add-on to their unemployment insurance bills.

Currently, the tax is one-hundredth of 1 percent of the first $7,000 in wages, making the maximum $7 per employee per year.

Hauge said he doubted many employers would bother with the tedious application process. McAloon said training and reimbursement plans take 120 days to develop.

“If they have few employees and no one designated to work on this kind of stuff, then they see it as burdensome,” Hauge said.

While the training panel focuses on big firms in key sectors, it does also offer a small-business program with expedited contracts and higher reimbursement rates. Employers must have fewer than 100 employees in California and 250 worldwide.

But many small businesses that employ a dozen or so workers — family-owned restaurants, neighborhood retailers, bike and auto body shops and day care centers, among many others — offer low wages, have high turnover rates and offer little opportunity for career advancement. They likely would not qualify even if they did apply. McAloon said eligibility requirements include low turnover rates and career advancement opportunities for workers.

“We support training for good-paying jobs and career mobility,” she said. “We’re focused on doing targeted training for industries that have the biggest impact.”

Patrick Johnston, a former state senator representing Sacramento and San Joaquin County, wrote the law creating the Employment Training Panel in 1981. He said the program was designed to benefit larger companies with a wider economic reach.

“The employer has to front the money for training and provide a career ladder, and then move people into higher-paid positions,” said Johnston, who now heads the California Association of Health Plans. “And by its nature, that’s less often the case with many small businesses.”

Some policy researchers express skepticism of the panel’s claim that it stimulates overall economic growth in California. While the Employment Training Panel boasts that its grants do not come from the state general fund, the tiny tax paid by every employer does produce economic drag.

“Even if there was some sort of stimulative effect from pushing money into these job training programs, there would be at least an equal anti-stimulative effect, because of all the businesses that pay the tax that don’t benefit,” said Adam Summers, a senior policy analyst with the Reason Foundation, a conservative think tank based in Los Angeles. “They would have invested that money in their own companies rather than sending it to Boston Scientific and others.”

The decision about which sectors receive subsidized training is always a highly political one. In 2012, the health care industry — one of the five industries the Employment Training Panel focuses on — spent more than $230 million to lobby government, more than any other sector. In California, too, health care remains one of the top lobbying interests, spending $4 million in just the first half of 2013.

By contrast, small businesses lack the organizational capacity and political clout to ask lawmakers for subsidies.

California’s training funds “take money from a large group of people and give it to a small, politically favored group, and somehow claim there’s going to be a benefit,” Summers said. “But it doesn’t work that way.”

Alex is a Bay Area reporter and producer. His work has covered business, politics, education, healthcare, housing, workforce development, the environment, and immigration. He is currently attending UC Berkeley's Graduate School of Journalism.