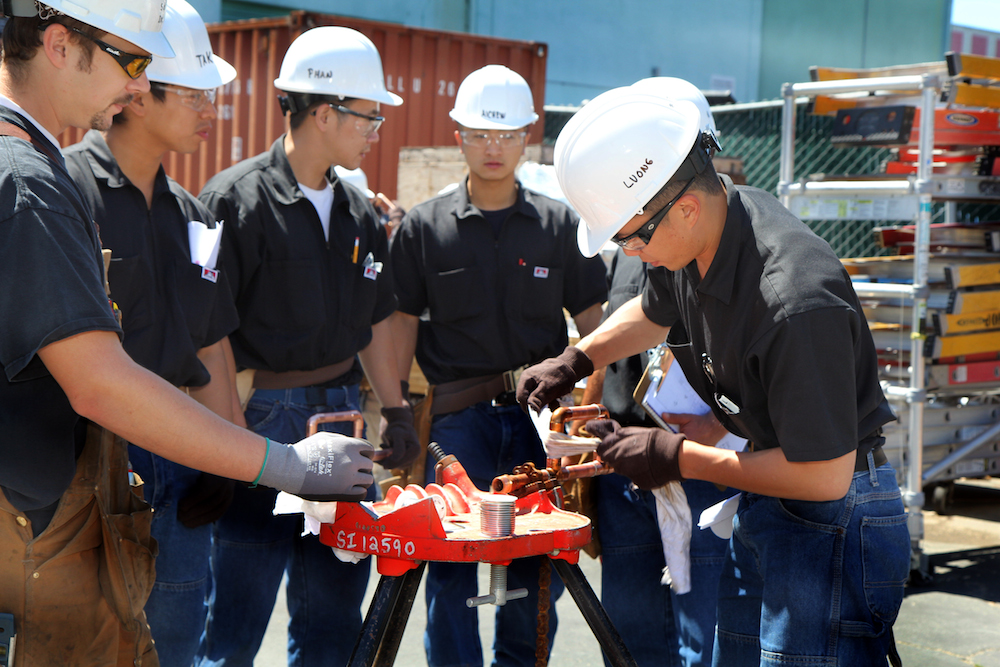 CityBuild Academy students, above and below, learn to solder by building toolboxes out of pipes at City College of San Francisco’s Evans Campus. The city-sponsored training course can lead to union jobs, but not for those without high school diplomas. Photo by Tearsa Joy Hammock | San Francisco Public Press.

Rigorous screening limits candidates, who are groomed for union apprenticeships

The good news: San Francisco offers a free 18-week training course through City College that takes low-skill, out-of-work city residents and sets them on the path to construction trade careers.

The not-so-good news: While the instructors try hard to be inclusive, some city residents who need the program do not satisfy the minimum qualifications, including a high school equivalency degree.

Each year, neighborhood organizations direct candidates to CityBuild Academy from the low-income communities they serve. From there, unions are able to find job placements for 85 percent of graduates. It helps that San Francisco is experiencing a massive construction boom that has raised demand for trade laborers to levels not seen in a decade.

Since CityBuild began in 2006, its organizers have sought out workers who are “economically disadvantaged” — those who have had interactions with the criminal justice system, lived in public housing, used a substance-abuse treatment program or received welfare or financial aid. The theory is that construction is ideal for people whose backgrounds exclude them from other labor sectors.

But applicants must possess a few basic requirements: a valid California driver’s license, a high school diploma or GED, and the ability to pass a drug test. A background check is not part of the process.

Even these minimum standards disqualify some San Francisco residents who could benefit from construction work the most, say some job training experts and advocates for workers from poor neighborhoods.

“CityBuild is not inclusive to those in the community, based on the prerequisites,” said Jamie Brewster, the employment training center site manager for Asian Neighborhood Design, a San Francisco-based nonprofit organization that offers a pre-apprenticeship program in solar panel installation. Ethnic minority workers are disproportionately affected by the program’s union-based criteria, he said.

Brewster’s organization channels its graduates into jobs that do not require union certification. “When they brought the unions into the mix, they have their own standards,” he said.

But Michael Theriault, secretary-treasurer of the San Francisco Building Trades Council, said unions can absorb only so much responsibility for placing workers with multiple barriers into stable careers in construction. From its inception, Theriault said, CityBuild “was intended to be a feeder to apprenticeships with unions. The requirements answer to the realities of the industry.”

No more than 100 students will make it into the academy this year. CityBuild runs two courses a year, accepting 40 to 50 applicants per cycle. Meanwhile, the number of applicants is growing: 250 are expected in the next cycle, up from fewer than 100 in the program’s early days.

The city spent $2.7 million on the training course in fiscal year 2012-13, city records showed, making the average annual cost over the last five years $33,296 per job.

The academy provides students with all the supplies they need for the 18-week program — boots, helmets, tools, even transportation and grocery vouchers. They also get college credit.

In mid-August, CityBuild students learned plumbing at City College of San Francisco’s Evans Campus in the Bayview. They got experience soldering, joining copper pipes to forge the handle of their own toolboxes. When one student expressed nervousness about the assignment, the instructor replied: “The thing is to learn from the mistakes.”

Some CityBuild students already have jobs but are looking to move into better-paying careers.

“I figured that if I’m going to bust my back at work, doing this for $12.65, I might as well actually go and bust my back and make $25 an hour,” said Donald Williams, who left his job refueling airplanes to retrain for construction with CityBuild. During the plumbing exercise, an independent contractor was on site, instructing students and scouting for talent; Williams pocketed his business card enthusiastically.

But CityBuild is small compared with the ranks of unemployed manual laborers. The program is “relatively competitive,” said Jacqueline Flin, executive director of the San Francisco chapter of the A. Philip Randolph Institute, a nonprofit group that does training and community organizing with minorities and public housing residents. “There are only a certain number of slots per cycle,” she said, “and we need to make sure we are screening the right folks.”

Many of the candidates she refers to CityBuild are rejected. Sometimes the prospects are clearly irresponsible — they miss a meeting or neglect to answer the phone. All she can do is help them to reapply. But Flin said CityBuild needs to take care not to exclude workers who can take advantage of a hand up, adding that the APRI considers what additional resources, such as childcare, might be needed.

Those who meet the minimum program application requirements must attend five days of “job-readiness training,” beginning at 7 a.m. — a schedule that filters out undisciplined workers. Then students are interviewed and undergo physical fitness training, which continues throughout the 18 weeks of the academy.

“CityBuild provides a polished product,” said David De La Torre, business manager of the Northern California District Council of Laborers. He said the academy provides students with simple life skills, such as getting up early and arriving at work 15 minutes ahead of time.

The program’s director, Patrick Mulligan, said students are filtered, and only those likely to follow through are selected. Otherwise they will graduate from the program without a real chance at apprenticing with a union, which is the impetus of the entire training. “We don’t want to bring people into our program and not be able to help them,” he said. “We want to set them up for success.”

CityBuild was originally designed to provide minority communities with good jobs, said Terry Anders, founder of the Anders & Anders Foundation, a San Francisco workforce training organization focusing on preventing criminal recidivism and drug abuse. But he said that CityBuild and unions should be helping larger numbers of disadvantaged workers.

“If you’re not trying to include someone, then you are excluding them,” Anders said. “Why should a hundred people out of a community of a thousand be able to say that we work?”

Experienced contractors and trade workers supply instruction and are paid through the program, but they donate materials for the classes. They also scout for promising apprentices.

“Contractors come to City College and as part of their community outreach, to give back, they bring back people who have gone through the program, and they bring supplies,” said Miquel Penn, project manager for the Mission Hiring Hall, which helps recruit for the academy.

The partnership with contractors is two-sided. It exposes students to 26 construction trades and prepares them for union jobs. It also eliminates the uncertainty for employers in hiring inexperienced workers.

“The thing with CityBuild is you take a lot of the risk away,” said Chris Iglesias, the first director of the academy.

Use of the City College facilities allows access to federal financial aid for the intensive 18 weeks of hands-on training. After their apprenticeships, usually lasting five years, construction workers reach journeyman status. Construction offers higher wages — $20 or more an hour, basically middle-class work — than entry-level positions in other industries, as well as health insurance and a pension. Ironworkers tend to make the most.

But City College is now facing the loss of its accreditation next summer over management and financial issues. Mulligan said that in that circumstance, CityBuild would have to reevaluate its programming. “We try to measure the pulse daily,” Mulligan said. “I can’t say definitively where that’s going to go.” There has also been talk of moving to another school.

Not everyone in the industry is impressed by CityBuild’s results. Brian Colombo, apprenticeship coordinator for Ironworkers Local 377, said graduates do cultivate a better understanding of what’s required in the workplace, but that does not guarantee success. “It’s been a mixed bag of results,” he said. “There are some that do fairly well and some that bomb.”

And the slim prospect of steady union jobs only disappoints those hundreds of hopeful workers who are not selected for the program.

Brewster of Asian Neighborhood Design said one of CityBuild’s original aims was to help residents of Bayview-Hunters Point, but few applicants from the neighborhood get in. “It’s a double-edged sword,” he said of the academy. “They’ve done a lot. They’ve put a lot of people to work, but now they are neglecting the southeast sector.”

Brewster’s own agency, which trains workers who need more help with basic life skills, closed in October as government funding dried up, but he hopes to reopen it in early 2014. He said he worries that the city’s workforce development infrastructure is missing the chance to bring the long-term unemployed into productive and stable careers. “We work with people CityBuild won’t touch,” Brewster said. “Who’s going to take them when our funding is getting cut?”

Chorel Centers graduated from Mills College, where she received a BA in English with an emphasis in creative writing. She served as managing editor of The Campanil, Mills’ student news organization. Chorel also studied at The New School in New York as well as San Francisco City College. Her interests include women’s and social issues, the environment, sports and music writing, and literature. She plans to pursue a career in editing.