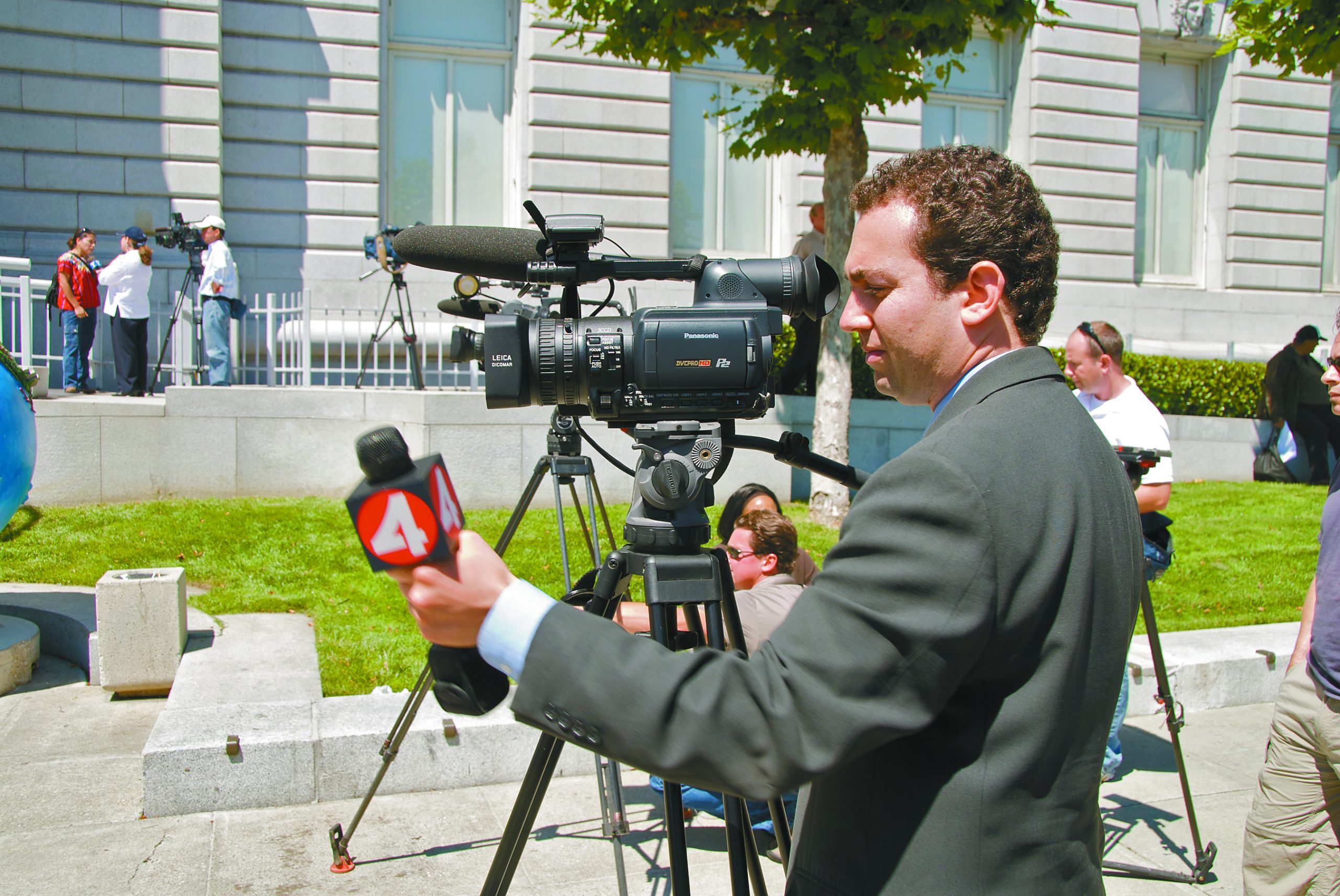 KRON 4 reporters shoot and edit their own stories, allowing the station to stop using two or three person news teams. The station says it has added reporters as a result. Photo by Steve Rhodes/SF Public Press

Local TV stations, the No. 1 news source for people in the Bay Area, are scrambling to adapt their news formats and slash budgets to fend off the triple threat of diminishing ad revenue, growing Internet adoption and cable news.

To do so, they are using technology to turn multi-person news teams into solo “VJs.” News directors say it is the best use of dwindling resources and gains in technology. But critics say the cost to local viewers is less information about substantial topics and more crime, traffic and weather coverage.
San Francisco’s KRON 4 was one of the first major-market television stations in the country to switch to the video journalist model in 2005, following a four-year financial and viewership free-fall and the loss of NBC network affiliation in 2001.
“The VJ model,” also referred to as multimedia journalism, is a one-man-band method wherein reporters are responsible for reporting, conducting interviews, shooting and editing their own stories. Michael Rosenblum, a producer and consultant who travels around training and indoctrinating newsrooms into his VJ paradigm, describes himself as leading the revolution. He was hired by KRON in 2004.
This model has been adopted to one degree or another by all the local stations that produce their own news; independent KRON 4, KPIX CBS 5, KGO ABC 7 and KNTV NBC 11, with the notable exception of Fox’s KTVU channel 2. In response to declining ad revenue, broadcast stations have cut some of the most experienced senior staff, replacing them with younger, cheaper talent.
The upshot: The medium where most Americans get their news is quietly changing coverage patterns.

While most people familiar with the industry will tell you KRON made the sudden shift to multimedia journalists because they had little choice, KRON general manager Brian Greif said that wasn’t the case.
“It’s easy to say, ‘Well they did it because the economy was tough and they needed to save money,’” he said. “That’s not the real reason for doing it. I mean, everybody’s moving in that direction. It’s the future.”
Greif said the advent of video journalists was the direct result of new technology, as video cameras, computers and editing software became more portable and user-friendly.
KRON has had a tough time in the last 12 years, ever since Young Broadcasting outbid NBC when the station was up for sale in 1999, paying a record $737 million. When channel 4’s network contract came up, NBC demanded that the local affiliate pay them to run its programming, in a reversal of tradition. When KRON balked, NBC switched to KNTV in San Jose, which agreed to pay $36 million a year. NBC ultimately bought KNTV in 2001, making it one of 10 NBC-owned stations in the country.
Upon becoming an independent station, KRON responded by increasing local news coverage, running more infomercials and using syndicated programming.
After an unsuccessful attempt to sell the station in 2008, Young filed for chapter 11 protection in 2009. Greif said KRON has been profitable since emerging from bankruptcy last year, and that ratings are up.
“There’s a misconception that KRON doesn’t have any viewers, and it’s not true,” he said. “We made a profit last year. The company as a whole had its best year ever last year.” For the most recent ratings period, KRON was number three in morning news, beating CBS and NBC. His station serves up 10 hours of broadcast news a day, the most in the Bay Area.
Pat Patton, KRON’s station manager, said when they first transitioned to the VJ model, some veteran reporters were told: “If you want to leave there’s no shame in leaving. We’ll let you out of your contract if you don’t want to do this.”
He added: “The irony of that is many of those did leave and went to other stations that are now going through the same thing.”

“The traditional way of doing journalism no longer exists,” said Melissa Camacho, professor of television theory and media criticism at San Francisco State University. “It’s certainly threatening an entire generation of news people who are probably retiring earlier than they thought they would or finding themselves unemployed.”
KGO news director Kevin Keeshan thinks that in most cases, management doesn’t have a choice. “We all get budget dictates from somewhere,” Keeshan said. “We’ve been fortunate that ours have been very reasonable.”
Keeshan said KGO has also been forced to cut costs, but that they were able to do it over time and through attrition, eliminating jobs on the technical side, such as engineers, photographers and videotape editors.
Unlike KRON, which had its staff undergo a six-day video journalism boot camp with Rosenblum, KGO is making the transition gradually.
Two years ago, they started switching to the multimedia journalist model with producers. A year ago, they trained six reporters who now use their video journalism skills to shoot enterprise stories — original reporting they develop through their contacts and their beats.
This is in contrast to KRON, whose reporters shoot daily chronicle-of-events stories that often air the same day they are shot and edited.
KPIX news director Dan Rosenheim, a former managing editor of the San Francisco Chronicle, said his station went through a similar evolution, laying off 14 from the newsroom in 2008 due to budget problems.
Rosenheim said the biggest problem for television and newspapers is a cyclical, long-term trend of declining audience. This is due to the diverse variety of news sources available, as well as the ability to consume them in a nonlinear fashion by watching clips and videos online or on other portable technology.
“As audience shrinks, ad revenue shrinks concomitantly,” Rosenheim said. “That’s not to say TV and TV news are not viable businesses. They are, but they’re harder businesses and there is a lot more pressure on costs.”
KPIX has made the move to multimedia journalism gradually, with the greatest push to get everyone trained in the last three to four years.
Rosenheim said the Bay Area media advertising market decreased by 50 percent in the last decade, going from about $700 million a year to between $300 million and $400 million today.

Critics contend that much of television news has become overly focused on crime, traffic and weather, while ignoring in-depth reporting. “We’ve had a willingness to depart from quality of news reporting to just quantity and how quickly we can report it, because digital media lends itself to that,” Camacho said.
Dina Ibrahim, a professor of broadcast journalism at SFSU, said that since coming to the Bay Area in 2003, she has noticed more crime headlines with less coverage of issues of concern to ethnic communities. She sees more episodic coverage as opposed to thematic.
“Episodic coverage tells you, ‘yep someone got shot last night,’ and thematic coverage tells you not just what happened but why,” she said. “‘Someone got shot because there were cuts to the police force.’ To be able to link it to what’s really going on.”
KRON’s Greif said broadcast news still has advantages over print and the Internet.
“TV newscasts are still a mass medium, unlike the Internet. You know, if I go online I have to work. I have to pull up the website, I’ve got to read it, that sort of thing. The beauty of TV, and why still over 87 percent of people say that their preferred method for local news and information is a television newscast is I’ve just got to turn the TV on and sit there. I don’t have to do anything,” he said.

Editor's note: This story appeared as part of the Public Press' Spring print edition media package of stories. The end of the last sentence of this story was cut off and can be read here in full.

Mineko got her B.A. from UC Berkeley in English and Anthropology, and is now a reporter at SF Public Press and a producer for the Bay Area Video Coalition's Neighborhood News Network.