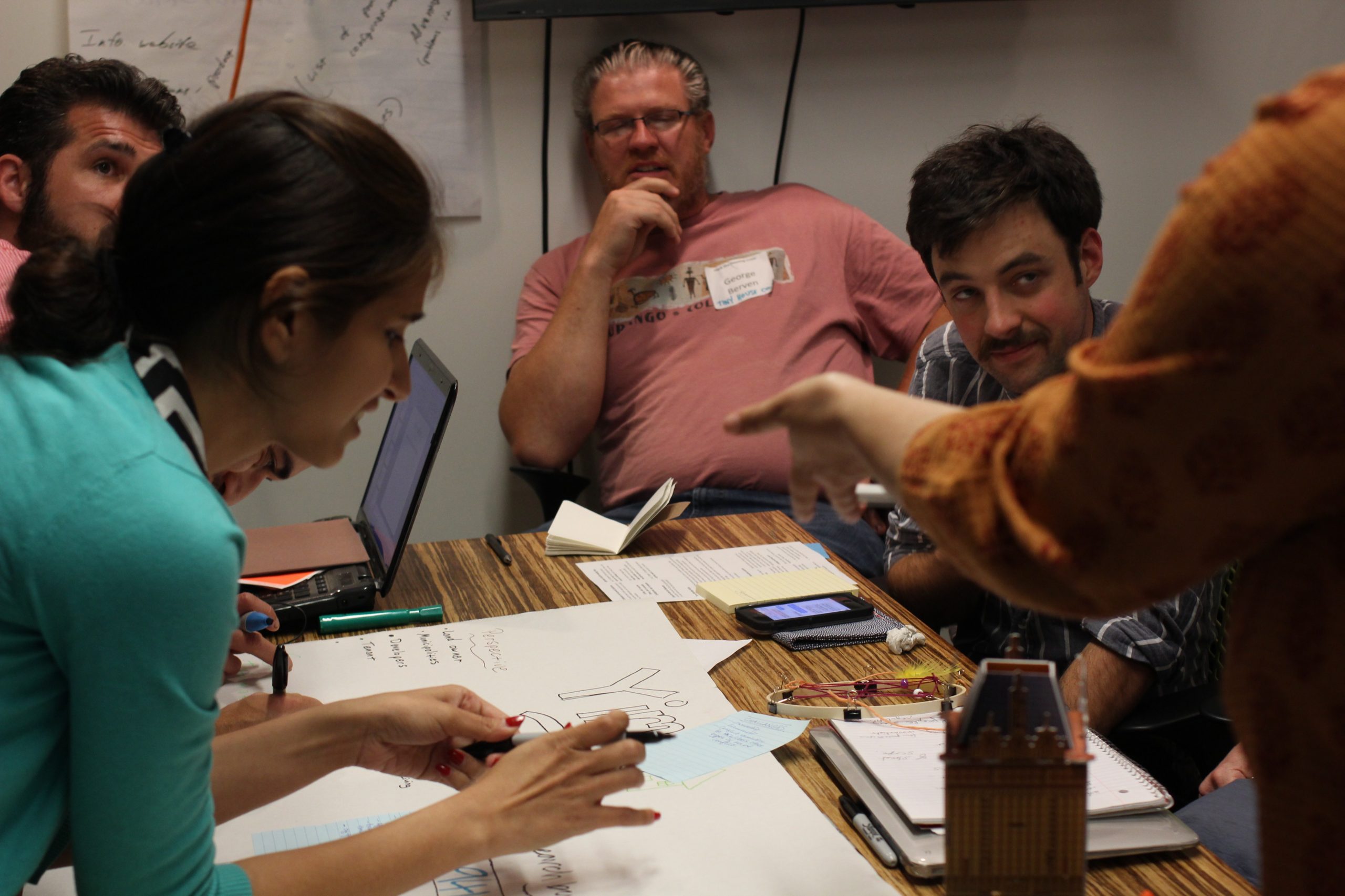 Participants design a website that would tell people how to build tiny, off-the-grid homes, one of many ideas that groups workshopped at the “Hack the Housing Crisis” event on June 13. Photo by Noah Arroyo / San Francisco Public Press.

That was one of the more unusual ideas to come from working groups at Hack the Housing Crisis, a June 13 conference hosted by the San Francisco Public Press and Shareable at the Impact Hub SoMa. Other ideas included creating eviction crisis teams, helping homeowners step into the property management business to take on additional tenants, and encouraging more city residents to form cooperative housing.

The day started with rapid-fire presentations from experts, who afterward joined citizens and advocates in various discussion groups to brainstorm new solutions.

The goal: find ways to increase or maintain affordable housing in a city plagued by skyrocketing rents and a dearth of low- and middle-income abodes. By the end of the day, they had spitballed policy changes, eviction-crisis teams and community-based sharing among other things.

Given the time constraints of the conference, many of the ideas were preliminary brainstorms. Groups were open about their unanswered questions.

“How much would this cost?” said Edwin Lindo, a board member of the Bernal Heights Neighborhood Center, who helped present the prefabricated building-topper idea. “Will the existing infrastructure accommodate for it? What laws will need to be changed?”

One group invented a company, called “Housing City,” that would help cash-strapped homeowners reconfigure their properties and take on additional tenants to supplement their incomes.

Housing City would pay Gray up front to build a small cottage in her backyard, Riddlesmith said. After helping Gray find a tenant for the cottage, the company would collect a cut of that tenant’s monthly rent. It would also handle legal services and help Gray manage the property by making sure the cottage was up to code and properly insured.

“This will be the incentive for businesses to take the risk of developing these units, and also bring property owners some income,” said Jeremy Bamberger, a designer at Perkins + Will architecture firm.

Yes In My Backyard

One working group suggested that more people establish co-ops to purchase and live in San Francisco’s existing buildings together.

Other participants suggested rezoning western neighborhoods for higher density on the condition that doing so would not displace current residents.

Another group discussed ways that San Francisco’s planners could use micro apartments of 220 square feet to house more people.

Micro apartments and modular housing could meet the needs of a variety of residents, group members said, from seniors who wanted to live near friends to students looking for a place to crash for a short time.

“When you’re looking for a micro unit, you’re pretty much looking for a shower and a bed,” said independent architect Indu Chakravarthy. “The city is your living room.”

The group also created a prototype website titled YIMBY — for “Yes In My Backyard,” a variation on the common phrase used to describe residents who would oppose nearby construction, aka NIMBYs (“Not In My Backyard”).

While serving as a repository for housing-related information, the site would also be a social networking platform where landlords, tenants and developers could connect to streamline the construction process and facilitate conflict resolution.

Participants envisioned that a tenant would call the city’s 311 emergency phone line immediately after his or her landlord served an eviction notice. An operator would identify what services the tenant needed — legal, mental health or even translation — and then trained staff would deploy to provide those services in person.

“We’re not trying to recreate things that already exist, because there are housing clinics, there is code enforcement, there is a rent board. But some people don’t know how to seek out those resources,” said Lexie Paza, program and outreach member for the nonprofit Housing Industry Foundation.

Some participants said dysfunctional policies at both the local and state levels had exacerbated the housing crisis.

One group noted that tenants only remain in government-subsidized housing as long as they can prove their incomes stay below a given threshold, creating a disincentive for them to seek pay raises. The group proposed that the government address this problem by checking tenant incomes less frequently. The city should also halt all “income-based evictions,” they said, which occur when tenants surpass those thresholds.

The group was enthusiastic about its idea. “We’re gonna take this all the way to the mayor,” said Carla Mays, an adviser at the California Emerging Technologies Fund.

And then there was the solution based on an incentive model: a competition with prizes. The group suggested holding a regional housing conference, where participating counties would contribute to a prize fund. Individuals and organizations would propose housing solutions to the counties, and “the top ideas would have resources showered on them,” said photographer Jackson Solway, who as a volunteer designed the first issue of the San Francisco Public Press. “In other words, we de-risk crazy ideas.”

Victor Casillas Valle is a reporter, writer, editor, and multimedia journalist. He’s covered immigration, housing, mental health, arts & culture and other topics. His work has been featured on KQED, The Bay Bridged, The Deli San Francisco, {young}ist, the Ocean Beach Bulletin, the Divisadero Publication, the Chronicle of Social Change, and others. He’s a current student at the University of San Francisco. Be sure to catch him on Twitter at <a href="http://www.twitter.com/victorcvalle">@VictorCValle</a>.

Journalist and editor Josh Wilson came to San Francisco to stay in 1992. He covers people, places and public affairs, which are in no short supply. Tweet him via @MrJoshuaWilson.