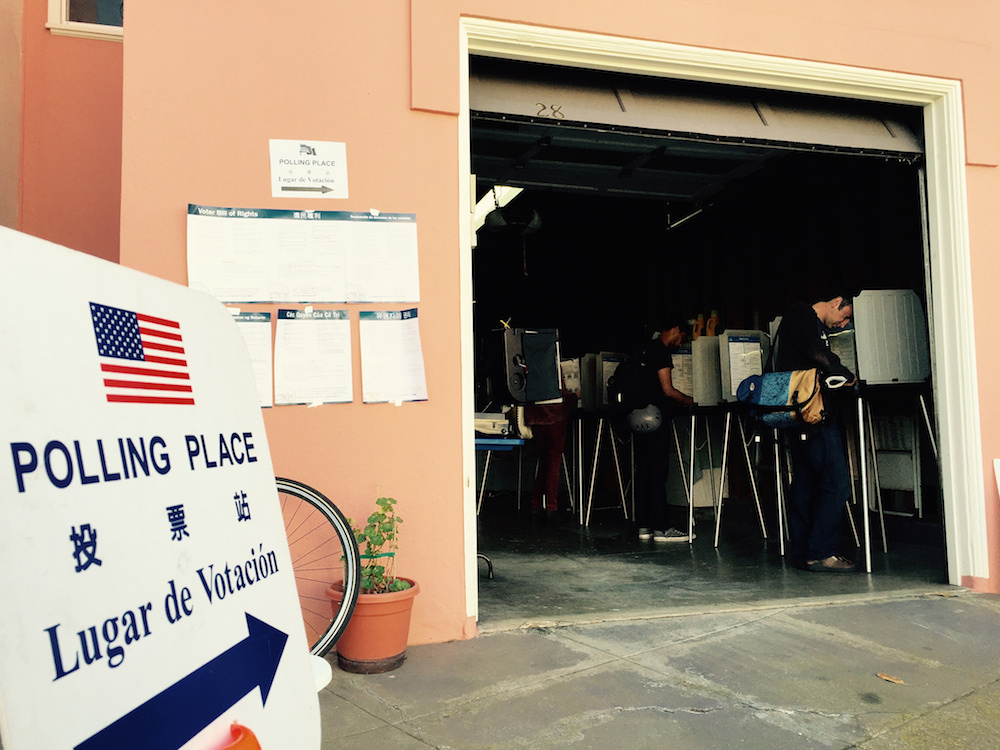 Voters at a polling place in a Bernal Heights garage in 2014.

San Francisco residents who are not citizens but are parents may vote in school board elections, including the upcoming recall election that could remove three members of the board. The Board of Supervisors in October made this enfranchisement, originally enacted through a 2016 ballot measure and scheduled to sunset in 2022, permanent.

Amos Lim, who manages the economic justice program at the nonprofit Chinese for Affirmative Action, said he votes in school board elections as a noncitizen because he wants to influence education policy in the district where his 14-year-old daughter is a student.

“I always feel that a lot of times, our voices are not being heard. Because we don’t get a choice in voting for any other federal or state election,” he said. “Locally, because education affects, starting on the ground level, our kids — as a parent, I would like to be able to have some say in the education policy or who we appoint to the SFSUSD board.”

For Lim, voting is a family affair. He and his husband began teaching their daughter the importance of voting and introducing her to sample ballots to practice on, at an early age.

“I think we started filling out her first ballot, the sample ballot that was sent to us in the election booklet, when she was maybe 4 or 5 years old,” he said.

Lim has long been an LGBTQ and immigration activist, and recognizes the power and limitations of direct action and trying to influence policy without the ability to vote.

“It’s kind of been impossible to talk to any federal officials right now. I mean, you can try calling your senators and you will get a voicemail and half the time the voicemail is full,” he said. “Half the time you don’t know if they’ve listened to you or they’ve even read your emails, you just get a pro forma reply back that says, ‘Oh, thank you for contacting my office.’”

It all comes down to voting to keep elected representatives accountable to their constituencies, he said.

“If you don’t think that you can get through to your representative, the only tool that you have, at the end of the day, is in November when there’s an election and you make your feelings known,” he said. “But for noncitizens, for green card holders, people like me, we basically just have to cross our fingers and hope that those people who vote will vote in their best interest and in the best interest of their city and their country. So we have to kind of rely on their goodwill.”

Lim said he understands that “citizenship has its privileges.” But noncitizen voting has a long history in the United States. According to Ron Hayduk, an associate professor of political science at San Francisco State University who has studied noncitizen voting, 40 states allowed those without citizenship to vote in local, state and even federal elections from 1776 to 1926. Several municipalities around the country, including New York City, are restoring that right, if only for local elections.

In San Francisco, the process of registering and then casting a ballot as a noncitizen is different from the process for citizens. The registration form asks different questions, and it is submitted to the Department of Elections in San Francisco, not the California Secretary of State. It notes that information provided to the elections department may be made available to federal immigration authorities. It also suggests that registrants consider checking with an immigration attorney before deciding to vote, so as to ensure that nothing about voting in the local election could jeopardize future applications for citizenship. The ballots themselves include only school board contests, since most races aren’t open to noncitizen participation. Noncitizens must also re-register before every single school board election in which they intend to participate, and they must be parents.

Lim encouraged those on the fence about participating to do so.

“Your voice is important. Whether you agree or disagree with where the school board is bringing the learning education policy for the last few years, this is where you get to make your voices known. So, you know, make the most of it,” he said. “Don’t just complain on Facebook or Twitter or whatever social network there is out there, and do something about it, and vote.”