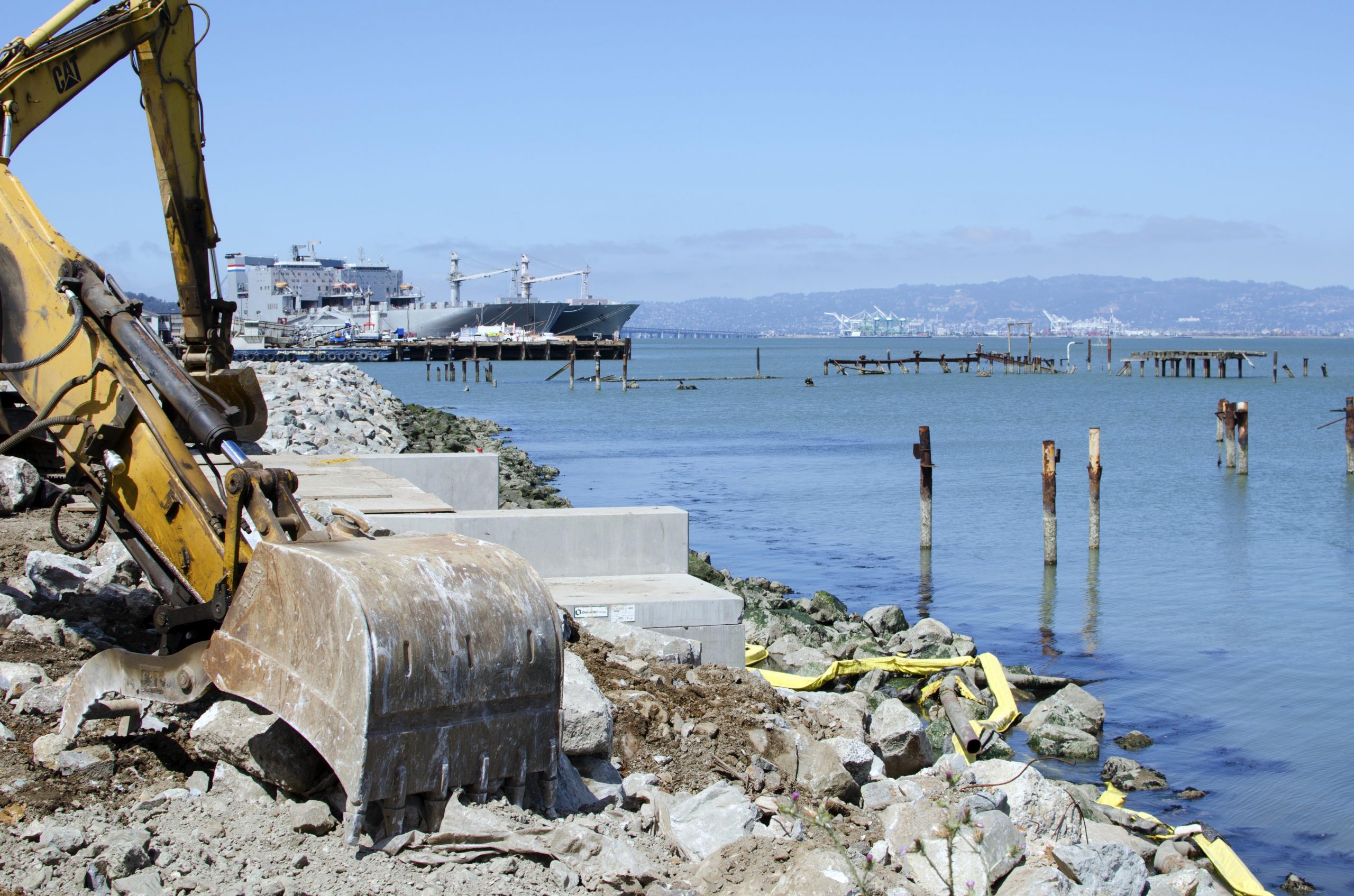 Bayfront development continues while regional initiatives get off the ground to align local planning and zoning codes. Photo by Dayvon Dunaway / Public Press

Regional coordination will be essential if Bay Area cities and counties are to minimize flooding as the sea rises. A few initiatives have launched, but none yet has the legal authority or resources to align all 41 governments that border San Francisco Bay.

Rohin Saleh, a civil engineer with Alameda County’s flood-control and conservation district, said a levee in one town could worsen flooding in adjacent communities. “We are dealing with a volume of water, and the water needs to be pushed one way or the other,” he said. “That’s why it’s critical that we all work jointly and make sure that our projects not only don’t have a negative impact, but we are actually helping each other.”

CAREFUL WHAT YOU FIX

Development decisions are made by city planning and building departments, boards of supervisors and mayors.

Imagine, for instance, that Redwood  City approves a high-value office park on waterfront land likely to be flooded by 2050. Since water seeks low points, protecting the property could also require new levees in communities to the north and south.

Who can nudge these governments to coordinate their approach? One candidate is the Bay Conservation and Development Commission. The state agency, founded in 1965, safeguards public access to the water and stops developers and public agencies from filling in marshes to create new land. Every project within 100 feet of the bay-shore must get its approval. “They need to be our regional agency that prepares for sea level rise,” said Kristina Hill, an associate professor of environmental planning at the University of California, Berkeley. “They need more authority.”

Brad McCrea, the commission’s regulatory director, said the agency has an avid interest in sea level rise and presses every project to consider future flood risks in light of climate change.

But the fact remains that no single agency has real authority to coordinate a regional response. Instead, there are several regional initiatives, including:

1. Resilient Shorelines Program: Organized by the Bay Conservation and Development Commission, the Association of Bay Area Governments and two other baywide agencies, it aims to develop a regional strategy for sea level rise by 2021.

3. Our Coast, Our Future: Public agencies and nonprofit organizations teamed up to create a detailed inter- active online map showing potential bay flooding under various sea rise scenarios. Its 2014 model is the most detailed digital tool that planners in many Bay Area cities have to work with.

4. Climate Readiness Institute: Bay Area flooding is one focus of this collaboration among academics, governments, nonprofit organizations and companies, launched at UC Berkeley in 2014.

5. South San Francisco Bay Shoreline Study: Federal and state agencies including the Army Corps of Engineers, the Coastal Conservancy and the Santa Clara Water District are proposing to spend $162 million for wetlands restoration and levee construction.

6. Other projects include a $2.5 million fund for planning called the California Climate Resilience Account; proposed legislation for a statewide preparedness database; and a regional authority in the South Bay to widen old levees and build new ones around San Francisquito Creek, which borders Palo Alto, East Palo Alto and Menlo Park.

Winifred Bird is an independent journalist covering environment, science and architecture in the U.S. and Japan. Her work has been published in Yale Environment 360, Dwell, The Japan Times and Environmental Health Perspectives.