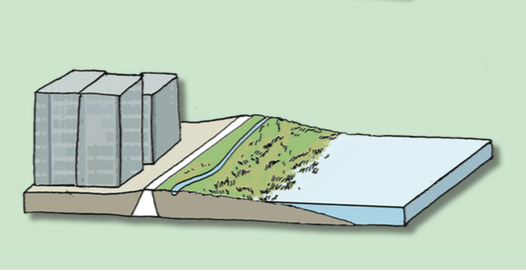 Water brings both life and risk to the shoreline, so seaside residents have long built barriers, canals and other protections to guard against storms and floods. Now sea level rise is adding an extra challenge: Flood risk will grow dramatically in coming decades, and some land that is dry today will be underwater in our lifetimes. That leaves cities, including those around San Francisco Bay, with four main options.

The simplest response, abandoning land that is at risk, is also the rarest. Communities encourage and protect coastal properties “so they can get tax revenue to pay for services and even adaptation strategies,” said Jessica Grannis, a sea level policy expert at Georgetown University Law Center in Washington. The best and cheapest time to adopt this strategy is after a disaster — not rebuilding after floods in some areas. But planning for these decisions should be made prior to such disasters.

Engineers typically do this by raising occupied floors above flood level or trucking in dirt to raise the land before starting to build. A 2014 study of the Gulf Coast by researchers at The Nature Conservancy and academic researchers concluded that elevating structures was among the least cost-effective solutions, ranking behind seawalls, natural barriers and simple sandbags. But it is the most popular solution around San Francisco Bay.

Dirt, rock and concrete can be effective barriers. Most of the urban parts of the bay and the Sacramento-San Joaquin River Delta are already protected by a patchwork of levees. San Mateo and Santa Clara counties are both studying what it will cost to make their levees stronger. But levees — and their more compact cousins, seawalls — are expensive and can fail. Officials at the Port of San Francisco say $5 billion in retrofits is needed along the 4-mile Embarcadero to keep some 700 acres of high-value property above the water line through 2100.

Natural habitats such as marshes, sandbars and creek beds absorb the energy of storms, mitigating risk from sea level rise. Past development has tended to erase or bury these features, but recent restoration projects are changing that. A 2013 study by the Bay Institute, a San Francisco-based nonprofit group, showed that restoring a 200-foot-wide strip of marsh around the bay would cut the cost of protection in half — mainly by allowing engineers to build smaller, less expensive levees. A rising bay will eventually put many marshes at risk of inundation, though some shoreline ecosystems are designed to grow vertically as seas rise.

Winifred Bird is an independent journalist covering environment, science and architecture in the U.S. and Japan. Her work has been published in Yale Environment 360, Dwell, The Japan Times and Environmental Health Perspectives.