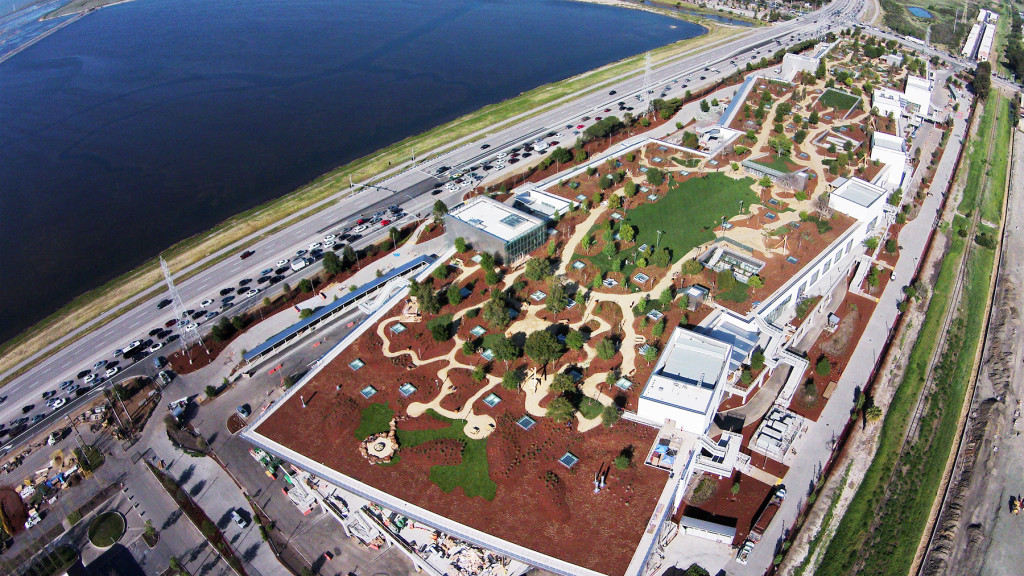 Facebook’s new west campus can fit 2,800 employees in its 430,000 square feet of new office space in Menlo Park. The main building, designed by Frank Gehry, has an elaborate rooftop garden. The tech giant says the structure is elevated above any foreseeable flood risk, though in environmental filings with the city the company says it is not responsible for maintaining nearby levees. Photo courtesy of Matt Harnack, Facebook

The San Francisco Public Press surveyed 13 Bay Area cities and counties where building projects are planned in waterfront areas vulnerable to sea level rise. While most are studying the issue, few have passed new regulations to limit growth or require developers to flood­proof their properties.

The results show a huge gap between awareness of the threats of climate change and concrete action to protect vulnerable waterfront communities in coming decades.

Reviewing published reports of plans for large­scale commercial and residential construction projects across the Bay Area, we focused on San Francisco, plus five other counties and seven cities where the most intense development has entered the permitting process.

In the chart below, we graded governments by their level of response to the threat of sea level rise.

All cities and counties responded that they were studying and planning, but fewer than half had completed vulnerability assessments. Two completed the drafting of an action plan. But carrying out changes, such as setting new zoning or land­use rules for private development, proved more of a challenge.

We also determined whether each government’s state­mandated climate action plan addresses sea level rise, and whether it had maps showing where future flooding was likely to occur.

Cities and counties cite at least three problems that keep them from acting more swiftly. First, while virtually all scientists predict that the bay will rise, nobody knows for sure how by much, or how fast.

“We’re having to do planning where the conditions are continually changing,” said Jack Liebster, planning manager for Marin County. “And water doesn’t really respect city and county boundaries.”

A second problem is that a rising San Francisco Bay will require regional solutions. A fix in one city can worsen flooding down the shore. Third, all the jurisdictions have struggled to fund environmental plans.

“Getting people to think about long­range problems, when they don’t even know how to fill the potholes today, is difficult,” said Brian Beveridge, co­director of the West Oakland Environmental Indicators Project, an environmental justice organization. “We’re at the beginning of a long­term public discussion that’s going to be tough, frankly,” Beveridge added. “It’s going to fall down along lines of class and political power — who will be protected and who will be thrown to the dogs.”

Status: Only county in our survey in which every city has adopted a climate action plan addressing sea level rise. But no countywide plan has been adopted.

Status: Developing plans to build up degraded wetlands, while abandoning some vulnerable land to San Francisco Bay. “The time is really right,” said Planning Manager Jack Liebster. “The community is really asking for this now. It’s not just staff saying we need to do this.”

Status: With $24 billion in property and contents at risk from extreme sea level rise flooding, the most of any West Coast county, 110,000 people may be at risk, a Pacific Institute study found.

Status: Creating a complex tool to estimate the economic effects of ignoring sea level rise, which can be shared with other counties. Demetra McBride, director of sustainability, said: “Everyone is looking at the cost of measures, and that can be daunting. What no one was really looking at was the cost of inaction.”

Status: A very low-lying, vulnerable community. Climate Central’s online tool shows that 30 percent of the city would be inundated if foods reached 8 feet.

Status: City has vast expanses of marshes and open space, so it has focused on strengthening natural barriers. “People are interested in sea level rise and they know it’s important,” said Maggie Wenger of the Bay Conservation and Development Commission.

Status: Hosts tech giants LinkedIn, Google, Microsoft and Intuit. City Council in May gave Google only a quarter of the new 2.2 million square feet available in the North Bayshore zone. A 2014 city plan discusses strategies including retreat, requiring developers to build higher and encouraging “adaptive planning” such as levees.

Status: West Oakland Environmental Indicators Project worked with other groups to study sea level rise and social equity. “This city, like most, is still assessing which institutions and facilities need to be protected,” said co-director Brian Beveridge.

Status: Facing complications of massive development in the at-risk bayside area of Redwood Shores, where Dreamworks and EA Sports are currently constructing new offices. The city is planning for sea level rise of 3 feet.

Status: Designed “food risk management levees” to protect the community of Alviso, a wastewater facility and other low-lying lands, according to the Planning Department’s Whitney Berry.