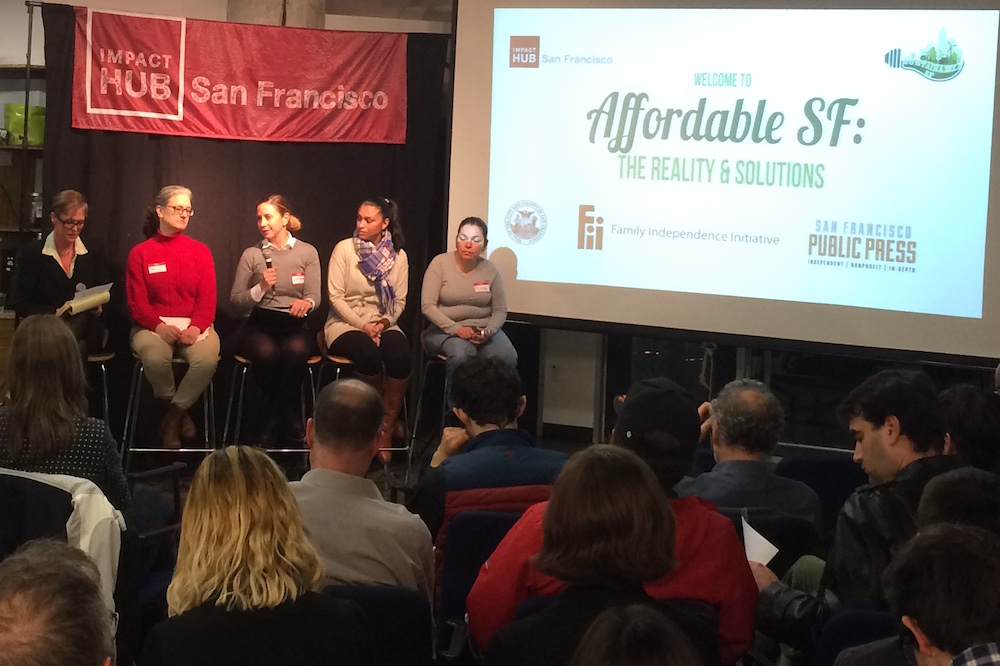 Everyone in San Francisco knows the cost of living has skyrocketed. What they might not realize is that consumer prices — led by escalating housing costs — are leaving many low- and middle-income families struggling to stay in the city while remaining above the poverty level.

“It’s no secret that housing is wildly expensive in San Francisco — it’s challenging to put numbers to that known fact,” said Sophie Hayward, director of policy and legislative affairs at the Mayor’s Office of Housing and Community Development. She spoke at a panel discussion on Jan. 26 at the Impact Hub San Francisco organized in response to the Public Press’ winter edition cover story, “$F: The Cost of Living Here.”

Though precise statistics are hard to come by, Hayward said one measure of the average rent for a two-bedroom apartment was shockingly high, $4,750, according to the San Francisco-based rental research firm Zumper. For a typical family budget, that requires a salary of $171,000 a year, or 210 percent of the area median income.

“Even if you disagree with that two-bedroom apartment rent, that sample rent, by any measure, we’re in — we are still in — a housing crisis,” said Hayward.

“This isn’t really about what people first think of when they think of affordable housing,” she explained. “A lot of people on a lot of ends of the income spectrum need help in affording their homes.”

Public Press lead reporter Angela Woodall moderated the conversation about what it takes to survive in San Francisco when prices are rising for almost everything — housing, health care, food, transportation, child care, communications and other necessities. The panelists also responded with ideas for how California and San Francisco’s city government could do more to help those in need.

Woodall  quizzed Caroline Danielson, a senior fellow at the Public Policy Institute of California; Sophie Hayward, director of policy and legislative affairs at the Mayor’s Office of Housing and Community Development; and family liaison Stephanie Zamudio and community organizer Norma Pelayo from the Oakland-based Family Independence Initiative, an organization that works directly with low-income families.

Danielson said that the traditional definition of the poverty line does not really apply to San Francisco. Accounting for current local costs, a single adult would need to spend a little less than $17,000 a year. That includes basic living expenses such as food, clothing, shelter and utilities. Those costs are higher for two adults and two children — about $36,000. The costs in San Francisco are about 20 percent higher than the statewide average.

Danielson’s updated method of measuring poverty takes into account the ways people spend their money differently from how they did in the 1950s. Adjusting for the cost of current households sizes and family dynamics, California’s real poverty rate should be around 21 percent — 5 percentage points higher than the official rate.

Hayward said that whatever poverty measure is used, cities must use all the resources available, including state and federal grants, to help residents who are struggling.

“We need to be able to account for every dollar and where it’s going,” she said. “And so those metrics are important in terms of defining need, but it’s also important as a way to get money to grow the pie.”

Though Danielson, Hayward, Zamudio and Pelayo had a lot to say about rising costs across the board, questions from the audience centered on housing — and the many ways to address the growing number of people struggling to pay the rent.

Some questioners from the audience challenged Hayward about San Francisco Mayor Ed Lee’s promise to build or rehabilitate 30,000 units of housing by 2020, arguing that only a small portion of that was within reach of the middle class. Hayward confirmed that Lee’s administration has “identified funding for the 10,000 units that will be affordable.”

Hayward also pointed out that District 8 Supervisor Scott Wiener proposed legislation in January giving special zoning status to new housing that is set aside as 100 percent affordable. Under Wiener’s proposal, “conditional use authorization,” which allows neighbors many opportunities to object or slow down a permit, would no longer be required. Those projects would bypass the two- to six-month hearing process, shaving off time and saving developers money. She argued that ultimately this streamlining would put downward pressure on housing costs across the city.

But these  answers revealed the desire from the audience for a broader array of solutions beyond policy. Everyone wanted to talk about housing, and what they could do to effect change.

Carla Mays, a consultant who advises organizations and companies on ideas for innovation, recalled her experience in June 2014 at “Hack the Housing Crisis,”a daylong event co-sponsored by the Public Press, the Impact Hub and Shareable. The conference was an effort to workshop creative solutions for affordable housing. A group she met with discussed the problem of residents getting kicked out of below-market-rate housing when their incomes rise. At a weekend hackathon in February 2013, Mays helped design an application that tracks below-market-rate housing units it real time, helping renters find and apply for affordable housing online. Mays and her colleagues are still trying to come up with solutions.

The problem arises, Mays said, “when you have people getting into BMR housing, but then they get promoted or get a new job, which raises their BMR, and they are given 90 days to get out.” Hayward said she could not address the specifics of that program, though she did add that it represents a relatively small number of units of affordable housing the city manages.

For Pelayo, who has lived in San Francisco for more than two decades, the lack of available affordable housing hits close to home. Her daughter and grandchild have been unable to find housing, she said, because landlords are less likely to rent to families. Many parents face similar circumstances and are being forced to leave San Francisco in search of somewhere else to live.

“Where are they sending us?” Pelayo asked. “This is where our roots are, our children were born here. We have to demand that we be respected and that we have humane housing.”

Working to solve the housing crisis “is a communal effort,” Zamudio said. “So many people have come forward with the same ideas and solutions, and all of them are community based.” Attendee Victor Vulovic spoke of solving the housing issue through co-living communities. Vulovic runs a 54-person co-living community in the Mission District, where short-term residents pay around $1,000 a month for a double room with bunk beds, while long-term residents pay $350 a month, including cost of living expenses such as food, utilities and cleaning supplies. Although the living arrangement has been the subject of controversy in the past, Vulovic said his co-op meets the needs of many people who want to stay in San Francisco despite the rising costs. He is working on a plan to expand his model to serve the needs of current Mission District residents.

Anil Pattni, an entrepreneur with Hacker Dojo, has a plan for 3-D printing houses that are less than 200 square feet, which he said could help create a sustainable community with a co-op mentality. While his project is still in its early stages, he stressed the importance of public support and community involvement.

Pelayo spoke of her desire to see the economics of community improve even as San Francisco changes.

“We know that San Francisco also needs to develop, but not because of that should we be displaced,” she said. If the city loses many longtime residents, it could also lose the culture they contribute to.