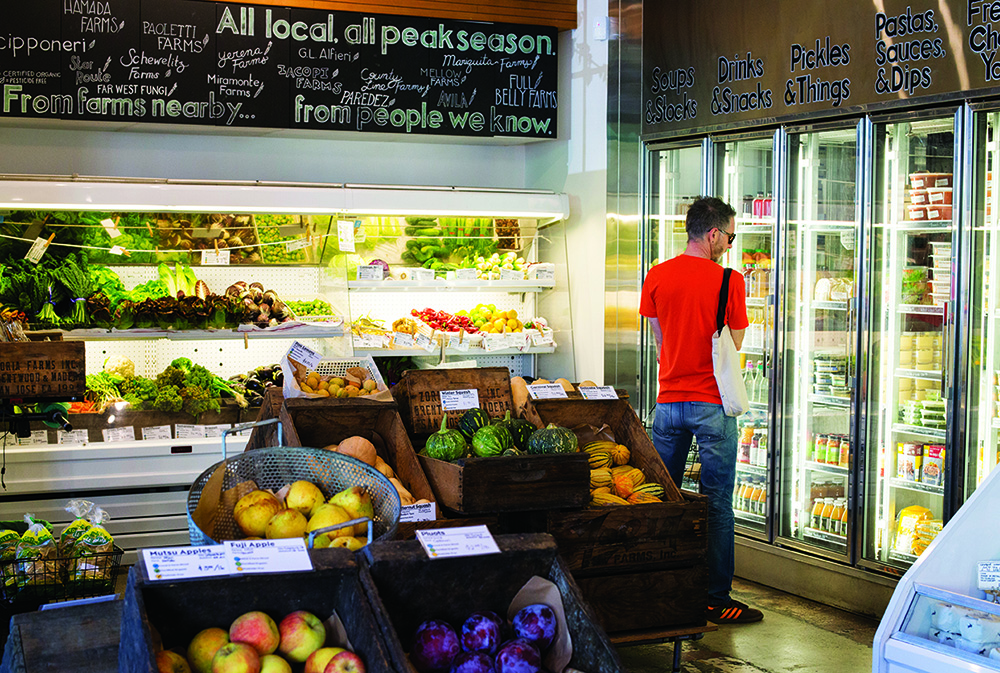 Local Mission Market prides itself on seasonal food and tells shoppers about the people who produce it. But the store, where prices run high, is not for everyone. Photo by Stella Sadikin / Public Press

If you shop at Casa Lucas and then Local Mission Market three blocks away, the contrasts of modern-day San Francisco come into sharp focus.

Casa Lucas, on the Mission District’s central artery of 24th Street for over 35 years, boasts a massive selection of produce, meats and traditional Latin American items, such as tamarind candy and chicharrones, near the register. You can get red potatoes for 79 cents a pound and a loaf of bread for $2.99.

At Local Mission Market, which opened in 2013, pulsating house music greets shoppers, and artfully lettered chalkboards announce that everything is locally sourced and fresh. Here, red potatoes go for $1 per pound and the cheapest loaf of sandwich bread is $6.50.

These stores are targeting two distinct populations with different priorities. One serves the area’s longtime Latino residents, many of whom are lower-income and need to spend as little as possible when shopping to feed their families. And its stock comes from far and wide. The other serves residents from far and wide who can afford premium prices for freshness and the cachet of buying from local vendors.

The latter group can choose to shop any number of ways and in many places. But lower-income San Franciscans are increasingly unable to afford enough of the food they need to stay healthy.

The San Francisco Food Security Task Force, a city-sponsored working group, reported in May 2015 that one-third of adults in the city with incomes less than double the federal poverty level were “food insecure” in 2011 through 2012. That was up from 26 percent in 2003 but down from 44 percent in 2009, the depths of the Great Recession. People are food insecure when they cannot afford or get enough nutritious food that they’re accustomed to in order to support a healthy life.

Low-income state residents struggling to put food on their tables can get help through two federally funded programs: CalFresh, which administers the Supplemental Nutrition Assistance Program — formerly known as food stamps and now often known as EBT (for the electronic benefits transfer cards that recipients use) — and WIC, which serves women, infants and children. But officials have said that only about half the California families that qualify for food assistance are getting it, and many families that don’t qualify for public assistance still can’t afford sufficient nutritious food.

The SF-Marin Food Bank estimated in 2014 that families of 11,000 city public school students were eligible for CalFresh but not receiving help. Already, 30,000 families in San Francisco and Marin counties receive help from the pantries each week, and food for 107,000 meals is distributed daily.

Guillermo Garcia sells at farmers markets throughout San Francisco for Edith’s Gourmet Baking Co., which is based in Modesto. He has seen shoppers cut back as his company increased bread prices to offset higher costs for flour, butter and sugar.

“Before, when we had a two-for-$7 deal they would buy two loaves,” Garcia said. “Now, since we changed our prices to $4, they only buy one.”

It is not just low-wage and unemployed people who cannot afford healthy groceries. “We have a sense that there are people in the middle tier who need food assistance,” said Paul Ash, executive director of the SF-Marin Food Bank.

“We are trying to come up with a food-assistance model that doesn’t seem like handouts, that feels good to go get,” Ash said. “These are busy working people; they can’t stop in the middle of the day to go to a pantry at their kids’ school.”

Lena Miller, who was born and raised in the Bayview, said that as a single parent of two teenagers, she has to cut into everything else to pay for food. Entertainment is gone. “You can have less food, but it’s hard to tell kids that there’s no food.”

Ash said that a big obstacle to creating food security in San Francisco is the large gap between the maximum income that CalFresh recipients can earn and what it takes to be self-sufficient in San Francisco.

Ash urged the city to pressure businesses not to cater only to the forces of gentrification. “If you want to come in and take advantage of the high-end population,” he said, “then you’ve got to make sure people across the city are fed.”

Caroline Cakebread is an intern with the San Francisco Public Press. She is a student at Syracuse University’s S.I. Newhouse School of Public Communications studying magazine journalism. She has worked as a writer and editor for the web team of the student run Jerk magazine, which caters to the alternative student audience at Syracuse, and will serve as the managing editor of the print magazine in the fall. She is a Napa native but currently lives in the Bay Area.