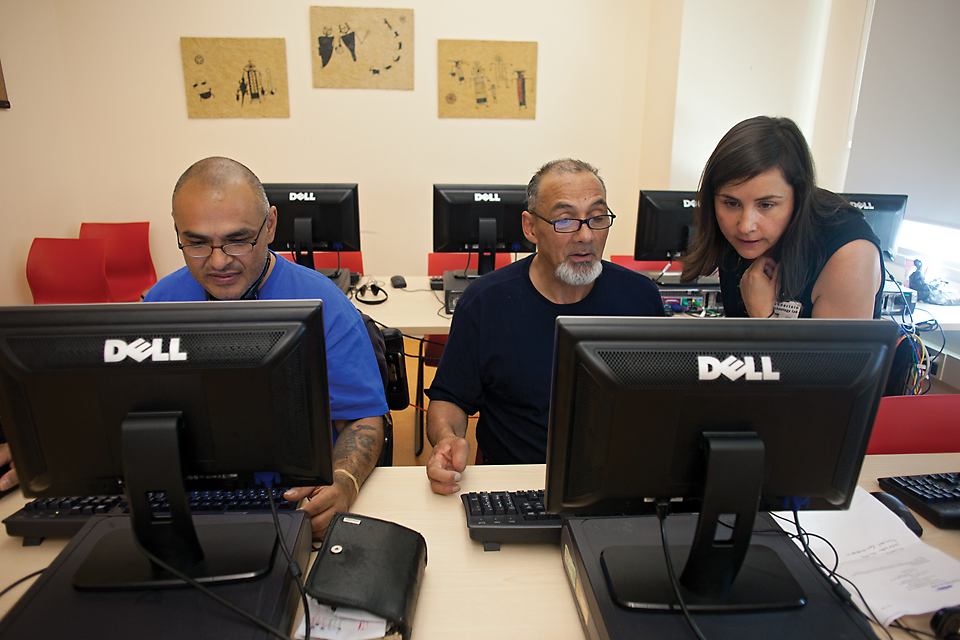 Anthony Fallin (left) said in 2010 that the Tenderloin Tech Lab was the only way he could maintain contact with his doctors. Photo by Monica Jensen / SF Public Press

In recent years, San Francisco has become the epicenter of technological development. While multi-billion dollar companies develop the latest new Internet services, 100,000 San Francisco residents cannot afford a home connection, according to a report from the city’s budget and legislative analyst.

Access is increasingly taken for granted — for finding a job, attending all levels of school, managing a business, enjoying affordable entertainment and even communicating with family and friends.

So doing without puts people at an increased disadvantage.

Lourdes Alarcon, who supports herself and two children by providing child care out of her Excelsior home, cancels even her low-cost Internet access when her clients are home with their kids and not paying for her services.

While Alarcon pays $9.95 a month through Comcast, she has to cut her spending in any way possible to cover rent, clothing and food.

“It forces me to be on task when I use the Internet,” Alarcon said. “I have one hour at the library and I just go to do a list: interview, meeting with a teacher, check the email. I don’t like to use the Internet, but everyone is using it.”

The city report found that the 100,000 residents without home Internet access include:

In contrast, 94 percent of college graduates, 98 percent of homes with an income over $100,000, 90 percent of whites and 89 percent of Asian and Pacific Islanders do have access to home Internet.

Kami Griffiths, executive director and co-founder of the Community Technology Network, said some students stand outside coffeehouses to get the free Wi-Fi they need to do their schoolwork.

“Kids need Internet at home,” Griffiths said. “The academic divide is increased when they don’t. These kids are doing whatever they can to get their homework done.”

While the city report didn’t survey residents who access the Internet through mobile devices, Griffiths says the point is moot, asserting that mobile devices aren’t good tools for job searching and homework. She argues that one must have a home connection with a non-mobile device to fully utilize the Internet.

“It’s very important having access to high-speed Internet. It’s an economic necessity. This could be one of the great equalizers.”
Jess Montejano, spokesman for Supervisor Mark Farrell

“The majority do not have Internet access,” Tyler said. “The ability for someone to afford and buy a computer in public housing isn’t there. There’s also issues of the effectiveness of a good signal.”

The city and Internet providers have started to broaden access. Low-income seniors and families with at least one child in the National School Lunch Program can get Comcast Internet access with download speeds of 10 megabits per second for $9.95 a month (including a router and installation). AT&T offers much slower service for about $36 a month at a 0.75 Mbps download rate. The FCC provides a $9.25 discount for low-income households, and offers the choice to spend it on broadband or phone service. And there is limited free online access at San Francisco Public Library (an hour at 10 Mbps); inside most of the city’s 137 public schools; and outdoors in 33 city parks and near hot spots the city has set up along Market Street.

But that does not solve the needs of students with several hours of homework each night requiring Internet access. It is not enough for job-seeking residents who need to make dozens of applications online and be instantly available by email for employers that respond. And it can leave seniors and others without affordable entertainment or modern means of communication.

Those gaps increased in January 2015 when the Federal Communications Commission changed its definition of high-speed broadband to 25 Mbps for downloading and 4 Mbps for uploading. The agency’s 2015 Urban Rate Survey found that four Internet providers can deliver those speeds in San Francisco — at an average price of $68.75 a month for the most basic service.

Supervisor Mark Farrell in August 2015 called for the city’s budget and legislative analyst to research how San Francisco can deliver 1-gigabit-per-second Internet service to residents and businesses citywide for free or very low cost, according to a press release. Jess Montejano, a spokesman for Farrell, said the city might use public or private funding or both.

“It’s very important having access to high-speed Internet,” Montejano said. “It’s an economic necessity. This could be one of the great equalizers.”

Peter Snarr is a multimedia intern at San Francisco Public Press. He is currently attending San Francisco State University as a journalism student where he has been a reporter and the multimedia editor for the student publication Golden Gate Xpress.