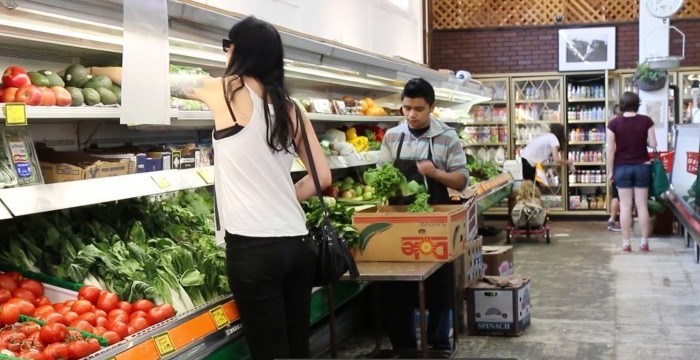 On Jan. 24, eligibility for COVID-19 vaccinations expanded to include an additional 168,000 people who live or work in San Francisco. Among them were education and childcare workers, emergency service personnel, food service employees and those who work in grocery stores.

Since the start of the pandemic, grocery store workers have been on the front line keeping everyone’s pantries stocked. Their union leaders have been fighting to get them both hazard pay and vaccinations.

As part of our “Essential Worker” series, we first spoke with Jim Araby, director of strategic campaigns for United Food and Commercial Workers Local 5 on Feb. 21, 2020. On Friday, he joined “Civic” again to discuss the union’s efforts to get its Bay Area members vaccinated.

“We blasted our 28,000 members on our email list, and sent them links to the different sites so they can actually make an appointment,” he said. “A lot of our stores, especially Safeway and CVS, are actually administering the vaccines at their locations. And we’ve negotiated agreements with employers in those locations to also vaccinate the workers in those stores.”

When we interviewed Araby last February, UFCW 5 had just worked out deals for temporary hazard pay increases for grocery store employees that were matched by nonunion stores in the region.

But Araby said those negotiations ended in June when most of the grocery chains dropped the hazard pay and refused to restore it.

“Then the winter came, and we had this whatever wave, it was the third or fourth wave, whatever you want to call the pandemic,” he said, adding that the number of infections among workers doubled during the winter surge to over 2,000, with a total of four deaths since the start of the pandemic.

“That’s when we decided we’re going to start going to cities to do it,” he said, referring to efforts that were ultimately successful to have municipalities increase compensation for essential workers. “Oakland was the first and then you had San Leandro, we have Berkeley, South San Francisco, and San Jose have all enacted some form of hazard pay.”

Grocery chains temporarily increased worker pay by $2 an hour last spring, while legislation introduced in San Francisco would require that workers be paid an extra $5 an hour.

The California Grocers Association has filed federal and state lawsuits against the cities enacting these policies, claiming they violate the state and U.S. constitutions’ equal protection clause, because they single out certain kinds of grocery stores. They also argue the measures violate the National Labor Relations Act, “which protects the integrity of the collective-bargaining process.”

“In addition to clearly violating federal and state law, the extra pay mandates will harm customers and workers,” said California Grocers Association President Ron Fong in a statement. “A $5/hour mandate amounts to a 28 percent average increase in labor costs for grocery stores. That is too big a cost increase for any grocery retailer to absorb without consequence.”

Araby said the hazard pay measures across the state have clear expiration timetables, some ranging from 90 to 120 days and some tied to the date when a given county enters the yellow tier. That is the least restrictive of the four tiers the state uses to determine public activity during the coronavirus pandemic.

He remains hopeful that hazard pay will soon cease to be a concern if they can just get workers vaccinated.

“Ultimately, it’s really about the lack of supply that we have this tiered system in the first place, it’s more about just making sure people know where to get it and we’ve tried to help our members navigate that as we’ve gone through,” he said.