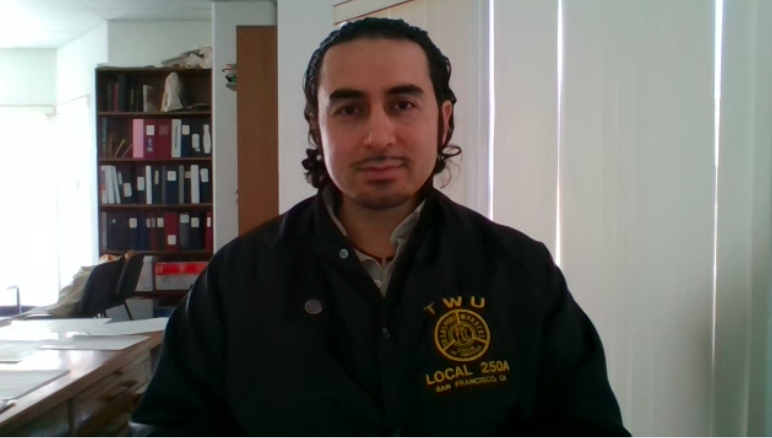 Hundreds of Muni workers have fallen ill with the coronavirus and two have died, said Roger Marenco, president of the Transport Workers Union Local 250A. For others, he said, the pressures of the job have only been worsened by the additional dangers posed by a global pandemic.

“It is and has been a psychological downward spiral for our membership, just in terms of coming to work every single day,” Marenco told “Civic.” “The operators are exposed to hundreds and hundreds of people on a daily basis.”

When some of those people refuse to comply with mandates that they wear a mask to prevent the spread of potentially coronavirus-laden particles, it puts Muni operators on the spot.

“It always falls on the operator, period, it just always does, unfortunately, because that’s a person that is interacting with the passenger, that’s the person that is interacting with the general public. And that’s the person that’s trying to deal with the issue of mask compliance,” Marenco said. “And it is he or she that ends up putting their life, their health, their safety in jeopardy, by simply trying to ask people to become compliant when it comes to wearing masks.”

Passengers who refuse to wear a mask can become agitated or even combative when admonished by a driver telling them to mask up, and Marenco called for compliant passengers to step in if they can do so safely. He said he has experienced himself that when a group of passengers back up an operator and insist that a noncompliant rider wear their mask or disembark, tense situations can be defused.

“When the public has helped me out, that is a huge weight that is lifted off of your shoulders, because it’s extremely scary being placed in that situation,” Marenco said. “Knowing that you have some people backing you up is absolutely helpful.”

While the pandemic has led to a sharp decline in ridership, Marenco says vehicles are still too crowded to allow for proper social distancing. He called for the restoration of full Muni service on bus and light rail lines.

“The less vehicles, the less public transportation you have out there, the more crowding you have on the buses, the more overcrowding occurs on a daily basis,” he said.

But the San Francisco Municipal Transportation Agency is also experiencing drastic revenue decreases, and the San Francisco Examiner reports only about 85% of Muni service is likely to be restored by 2022. The agency is also facing hundreds of staff vacancies, including drivers. Marenco said drivers who already work for the agency and have been waiting for more lines to resume service are ready, able and willing to return to work but making new hires has been difficult.

“Some people are quitting. Some people might have been offered this job as an operator, and they’re saying ‘thank you, but no, thank you. Maybe post pandemic, yes, maybe even pre-pandemic, I would have taken the job,’” he said. “I’m not really sure how else to compel more people to apply for this job. It’s scary.”