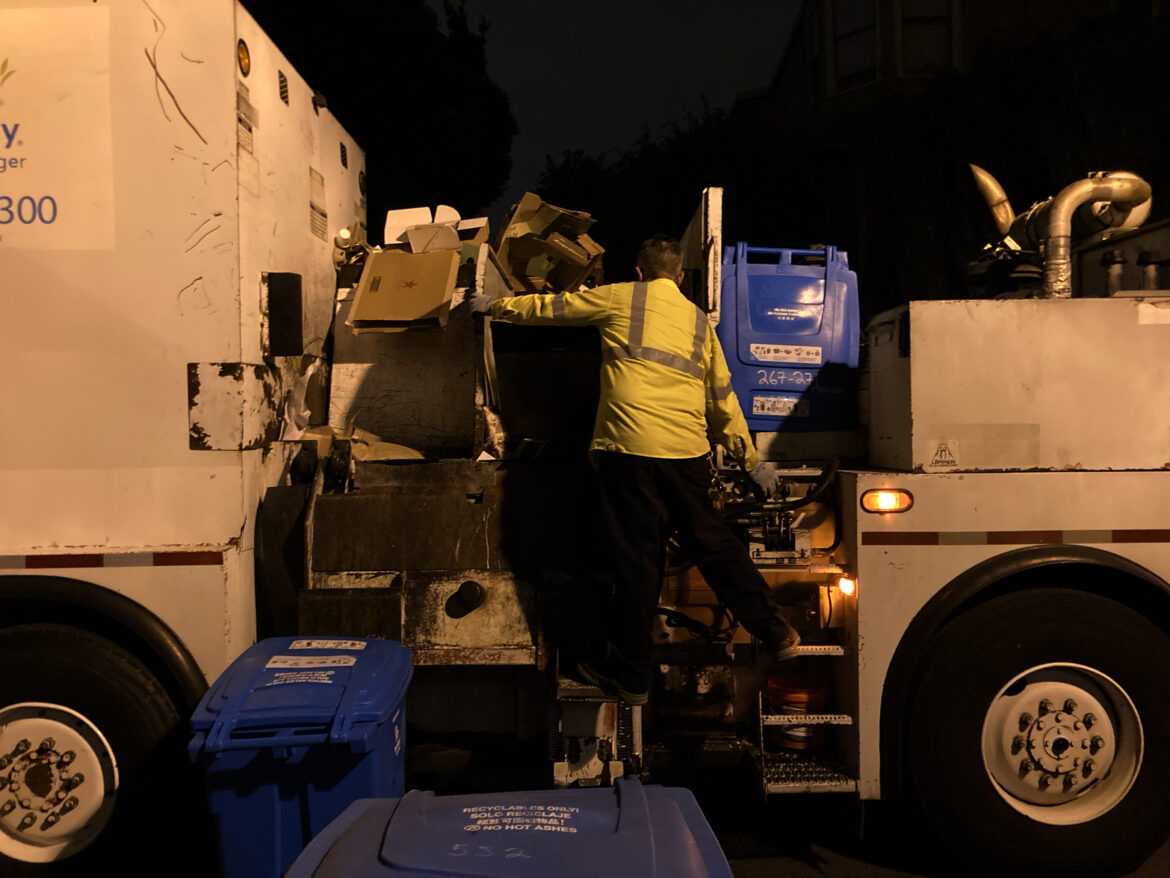 Recycling driver Gareth Willey has seen a sharp increase in cardboard discarded by residents during the pandemic.

It was chilly and still dark shortly before 5 a.m. on a crisp spring morning, but Gareth Willey was working up a sweat. He is a recycling driver for Recology Sunset and was coming to the end of his Tuesday route in a residential neighborhood. “Civic” was hitching a ride to get a sense for the job and how it has changed during the pandemic.

Willey ran from bin to bin, rolled them up to the lifter arms, and then worked the levers that tip the bins into the truck. Occasionally he picked a key from the rings that clanked in a compartment in the truck’s cabin, opened a gate, and hauled a bin up or down stairs from a patio or basement to empty it. Every so often a cloud of paper, cardboard and plastic flew out from an overfull bin and he had to pick up and toss the pieces back into the truck. That was one major change Willey saw when the coronavirus shut down the city: masses of cardboard from mail order boxes.

“It’s the cardboard that’s killing us,” he said. “It just makes this job so much more difficult.”

Some customers had their boxes broken down and neatly bundled, which helps, Willey said. But too often on some of his runs, he would open a door to a basement and find the boxes piled high, and would have to figure out a way to get all the material out onto the street and into the truck.

“It’s still really rough out there right now, but the first three, four months were just brutal, it was overwhelming,” he said. “It was like, you know, a kick in the stomach every time you opened the door and looked down.”

On the flip side, so many people working from home meant traffic had reduced significantly. And crowded streets are a problem for the driver of a massive garbage truck.

“That’s one of the quieter streets, the one I met you up on. There is some traffic, especially on the side streets, but it’s not unbearable. But pretty much the rest of my route is, it’s like a war zone,” Willey said, on the way to the freeway. His route complete, he now needed to get to the recycling facility where he would empty the truck. The predawn streets were already clogged with commuters.

That is the reason Willey’s shift begins so early. He normally finishes picking up bins by around 6 a.m. Any later and irritated drivers and cyclists start yelling at him as they pass, or passing him at unsafe speeds.

Recology drivers are aware that residents aren’t happy with the early schedule either, he said. He does his utmost to be as quiet as possible by running the engine only at low speeds and carrying rather than dragging bins up and down stairs.

That adds more physical effort to an already demanding and dangerous job, but Willey has tried other careers (including law enforcement, which he hated) and found himself in the sanitation business for more than 20 years.

“It’s not for everybody,” he said. “But I actually enjoy this part of work, the endorphin dump. You know, you feel good when you’re done. Assuming that things go well.”